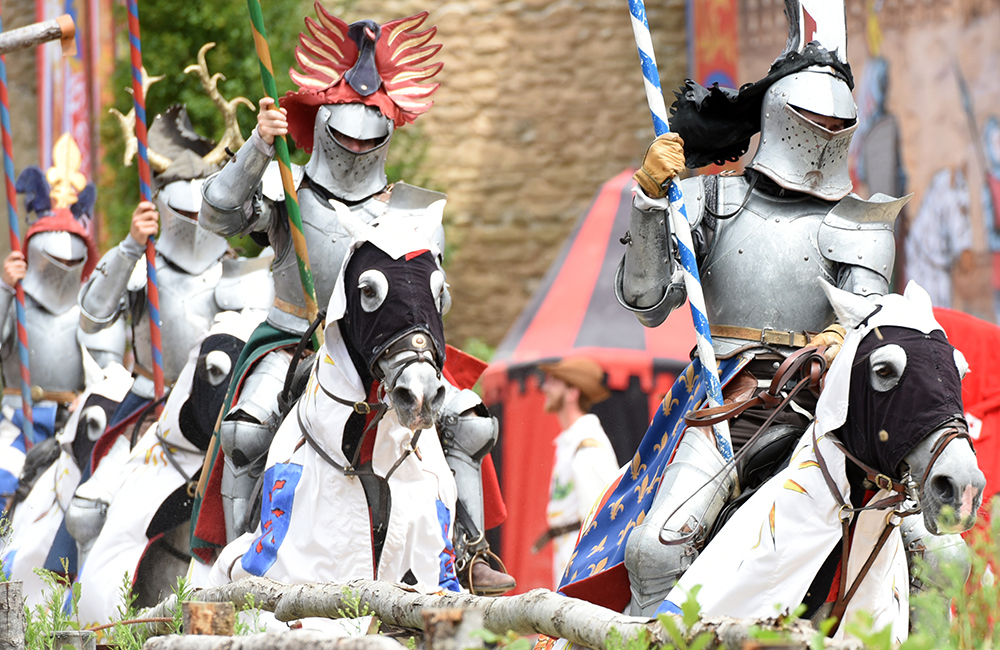 Time for the joust!

Want to add intrigue to your roleplaying session? Perhaps, even to devote two or three sessions to a plot thread?Â

Then consider using a jousting tournament as the centerpiece to your session devoted to courtly intrigues and all manner of opportunities for your adventuring party members to demonstrate their talents and skills.Â

History, legend, literature and film all can provide great inspirational material for your tilts. Don’t think of it solely as a competition of martial horsemanship. It’s a parade and a spectacle; an instrument of statecraft; a playground for poets, protesters and political operatives; a demonstration of religion and the arts; and fertile ground from which chivalrous romance and fanciful heraldry can blossom.

Looking for inspiration? Consider the accession day festivals organized by England’s Queen Elizabeth, which were entertainment platforms to amuse the populace, assert the loyalty of the nobles while diverting their attention from succession issues, and generally propagandize her rule. One account from 1584 says 12,000 people crowded into the tiltyard at Whitehall to see the parade and afternoon’s contests.

Nearly the first part of the novel “Ivanhoe” is a depiction of the events and intrigues leading up to a jousting tournament. There is a great deal to be gleaned about medieval politics and how they relate to the joust, melee, and archery contests.

Even films, be they light fare such as the Heath Ledger star vehicle “A Knight’s Tale” or nearly every depiction of the Robin Hood legend, can be source material for a gamemaster. Â

Here are some themes the GM can play with in working up encounters during a tournament.

1) Masks. Ivanhoe hides his identity as the Disinherited. As does Ledger as “Sir Ulrich Von Liechtenstein”. And “disguises” were much used by the entrants into Elizabeth’s tilts – though it was less about hiding the identity of nobles (everyone knew who the players were), but the costumes were seen as ways for particular nobles to make statements about themselves, their status within the realm, or aspects of their devotion to the crown and Elizabeth in particular. It was a way to publicly make a statement, or if you judged incorrectly, upstage the monarch.

And the Robin Hood legend usually includes Robin entering the archery list hiding his identity as an outlaw so that he can win by splitting an arrow.

2) Black Knights. It’s hard to top the sneering of Rufus Sewell’s Adhemar. But it is interesting that Black Knights are not necessarily “bad.” It’s more like the mask thing. Some are out of favor, or hiding their identity for a variety of reasons.Â  In “A Knight’s Tale,” “Colville” is actually James Purefoy as Prince Edward, riding in disguise. Of course, the coolest Black Knight is from “Ivanhoe” – actually Richard the Lionheart, competing in the melee, using the disguise to infiltrate the tournament run by his brother Prince John, who is supposed to be caretaker of the throne, and suss out his true intentions. Sometimes, events in the tilt spill over into kidnappings and sieges as rivals take their contests to their strongholds in the countryside.

3) Chivalry. Yes, the knights ride in the name of a lady, a muse for their exploits. But this idea of courtly love can be expanded to any competitor, even to the spectators themselves, whether they be noble blood or not and regardless of gender. The tournament fosters the idea of romantic gestures, of gallant action, of the theater (and even pretense) of love. A hand to win. A token of affection. An actual marriage contract must be fulfilled. All are in-roads into the intrigues of court.Â

One example of breaking away from traditional gender roles comes from the Wheel of Time novels, when Elayne, daughter-heir of the Lion Throne, publicly makes the heroic archer Bridgette the captain of her guard and privately her personal knight-protector. Bridgette forms an all-female protective brigade for Elayne. To dupe foes, the brigade adopts a foppish attitude (similar to the Three Musketeers) and projects the image of a group more concerned with fashionable appearance and frivolity. But they secretly train and drill to become an elite group. These intrigues and deceptions are all about maintaining the upper hand, especially during public appearances.

4) Power grabs. Everyone enters the tournament season looking to improve or retain their social standing, especially in regard to the sovereign. There are displays of loyalty (or either defiance or independence; sometimes a counter approach works, too).Â  Anyone who competes is vulnerable to being injured (and removed from the line of succession).Â  It’s not just knights and champions. Contests exist for every profession, mages and merchants alike. Rogues facilitate the players, or make power plays themselves. Petitioners come from every corner, as do pilgrims.

5) Invasion. The prospects of war adds spice to the proceedings. So does nail-biting diplomacy between rival states or factions. One of the most interesting uses of this device comes from the Carolingian Romances, when Angelica and Argalia interrupt Charlemagne’s Pentecostal tournament and issue a challenge: Any of the Peers who lose in single combat must accompany them and fight for their father, the King of Cathay. Of course, it is a cheat, for Argalia’s lance is enchanted and Angelica will use her charms to entice the paladins to enter the contest rashly.Â

Did we forget about the joust itself? There is a tournament to win, after all! Just remember, there’s more to this than lances and charging mounts. It’s statecraft on a micro level, so salt the tournament field accordingly and see what the players pick as avenues of adventure for their characters.