In a recent session of Hoard of the Dragon Queen, the players jumped on skis and whisked their way down the mountainside, pursued by the cultists’ elite ski troopers –Â dwarves armed with crossbows. 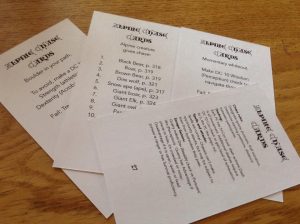 It was a chance to put into play the chase rules as detailed in the fifth edition Dungeon Master’s Guide.

For the DIY crowd, the d20 chart in the DMG was easily adaptable to cards, which I always prefer for chases.

I think there is more immediacy to a chase when the players draw a card, read the resolution conditions on the card for themselves, then roll for their chances.

(It’s the same chance as a GM’s random obstacle chart. It’s just that any chance I get to take stuff from behind the GM screen and place it in front of the players, I’ll do it.)

In this case, I left the DCs at 10, and occasionally at 15, matching the suggested targets given as examples in the DMG. This was the first time I had used the rulebook’s chase rules, so this example in play would serve to help me set the baseline for future uses.

With DCs set so low, all the PCs hit those targets with ease. The chase turned out not to be a challenge for them. That was OK for the purposes of the story at that point: They were supposed to rule the slopes and mop up the cult’s snowtroopers for a fast-paced encounter.

But if there was any sense of jeopardy, it vanished quickly. If I am to use this particular chase mechanic in the future, I’ll need to make some adjustments.

Setting target numbers for the players’ difficulty chances has always been as much art as science.

The last three editions of Dungeons and Dragons has used the same mechanic to good effect. The GM (or rules) sets a target number (usually increments of 5 from 0 to 45) and the player makes a skill or ability check using a d20 roll, adjusting it with appropriate modifiers.

The adjustment on my part has been the sliding power scale of the player characters’ abilities. Knowing where to set the target so that it is both an appropriate challenge to those characters and a fitting match to that point in the story.

As a matter of practice, I had third edition down cold. Experience on both sides of the screen gave me strong sense of where the target numbers should be for a given situation. For published modules, I knew when the target DCs were good and when they needed to be shifted.

The power curve for fourth edition was completely different, and the suggested DCs on the Dungeon Master’s Screen were of little help. But it must be said, the idea that there was a “range” of target DCs, for easy, moderate and difficult situations, codified what had been only hinted at as a “loose” system in third edition.

Now we’re working with fifth edition, which has a much flatter power curve. It should make setting DCs easier, and with time and experience, that mastery should surely come.

So far for Hoard, this was actually our second chase. Before we had a DMG to reference, I ported over the chase system I’d used previously for third edition games. Perhaps not surprising, the DCs were too high for a satisfactory experience. But the experiment was useful. It demonstrated that fifth edition was, indeed, operating on flatter curve (and gave me reason to trust the numbers in the example chase rules given in the DMG).

The target number system has always been one of the d20 system’s fiddly bits. When it works, it brings together an important element of play, resolving the character’s conflict with the “knowable” part of their environment. The lock needing sprung, the stuck door, the opponent’s armor class are all definable at that moment in time. It gives the PCs something clear and concrete to aim for. “If I roll high and have the correct modifiers, I should have a reasonable chance at success.” But it also sets knowable expectations. The target number for a sturdy lock or the chance for leaping across a 10-foot chasm will be the same, and enables them to make informed choices for given situations.

But setting DCs requires the GM to match A to B properly. While I contend that not getting those DCs right won’t “derail the game” as some insist it does, it can make players hesitant about a given situation. It can cause them to question the veracity of an encounter against the numbers on their player character’s sheet.

So what are your experiences with running chases in d20 games, setting target numbers, or blending in rules from older versions of games? Share your observations in the comments section below.