One of the brilliant things the D&D creative team did in Fourth Edition was wreck the city of Neverwinter and turn it into an adventurer’s playground.

Yep, they hit Neverwinter with an eruption of Mount Hotenow, slammed it with quakes and ruined the heart of the merchant quarter with a raw, stinking chasm from which spewed all sorts of demonic, spell-plagued creatures. 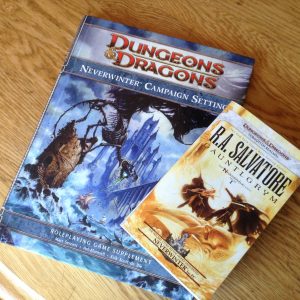 And after the immediate disaster, they populated the city with a despicable array of opportunists and evil factions, all fighting each other over what was left. Lord Neverember’s hold on power was thread thin, with any number of political foes trying to topple him.  The Jewel of the North not only lost its shine, there was a dark ugly crack running right through it.

From a DM’s perspective, it was wonderful. You had a mix of political intrigue, the conflicts were brutal, and there was an untamed frontier feel to the place. Hell, you even had a gang of Many Arrows Orcs running one quarter of the town. What’s not to love about that?

Well, apparently that was too much adventuring goodness for Fifth Edition. I finally grabbed a copy of the Sword Coast Adventurer’s Guide, and what did I find?

That Neverwinter pretty much has had an urban renewal project that took out all the fun bits of the city.

So, what kind of terrors yet await adventurers in Neverwinter?

Batman’s been fighting crime in Gotham City since when, 1939? Has the city ever gotten better? In fact, you can probably say it just gets worse and worse.

Why does Gotham City remain a cesspool that generates arch-villains like old bread sprouts mold? Because Batman needs someone to fight in next month’s issue, that’s why. No one wants Bruce and Selina Kyle to settle down and start having Bat-babies in domestic diaper-changing bliss. They want to see Batman and Catwoman duking it out, with maybe a few other caped baddies thrown in for good measure.

Adventure design is about conflict, not tranquility.

In twelve stupefying paragraphs, the Realms writers completely deflated that once-dynamic, danger-filled city. As a creative choice, it makes little sense, it does a disservice to the team that crafted that amazing 2011 game book that should serve as a model on how to present campaign settings.

As a DM, I don’t want a Neverwinter that I can move my family to because it promises a job with benefits. I want a dangerous place to drop my adventurers into. Heck, I don’t want it to get better. I want it to be like Gotham, getting progressively worse!

Quit Whining And Run The Neverwinter You Want

I know, I know. That option is not only open to me, it’s available for everyone out there.

It’s just that as someone who has been so gratified by Fifth Edition, from the quality of the core rule books, the rollout of the hardback adventures and now the release of a new SRD and Open Gaming Licence, it seemed like Wizards of the Coast was not only hitting its stride, it had a clear understanding of what makes D&D engaging.

I understand how the designers might want to reflect more stability in Neverember’s rule (especially now they’ve taken Waterdeep away from him and given it to Laeral Silverhand – a design choice I do wholeheartedly endorse – because it invites conflict and is ripe with storytelling potential). Or perhaps they need to reflect some changes from the series of novels or organized play. But I don’t recall the D&D Encounters “Storm over Neverwinter” or “Lost Crown of Neverwinter” resulting in a complete pacification of the town.

But that entry in the SCAG means that somewhere along the line, someone, probably several someones gathered around a white-board in a conference room, really missed the point.

And because of it, they’ve drilled it into the canon of the Forgotten Realms.