Published adventures are more abundant and accessible than ever before. The depth, range and quality of the material is as strong as ever, too. 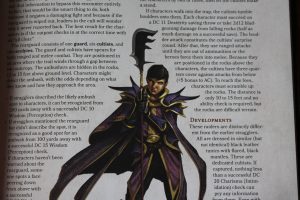 Descriptive text from Hoard of the Dragon Queen, Wizards of the Coast, 2014

That increases the likelihood of GMs incorporating published adventures into their games.

Of late, I’ve tried to streamline my process for preparing published material, whether I’m porting in an encounter from an outside source to use in the next session, or outlining several sessions from a campaign guide.

These three things are what I consider my priorities when gleaning from published adventures for my table.

I really try to zero in on identifying key information points in an adventure.

What information must the players receive and how will I convey it to them?

A lot of this is stuff they need to know to move things along from point A to point B. But it is also material crucial to developing their character’s individual story and the party’s collective tale.

Once I’ve made bullet points of the information points that are absolutely key, I give thought to how it will be revealed: From an NPC with a telltale voice or manner. A dying character’s last will and testament. A newspaper clipping. Engraved on a rock.

If important information is provided in a distinctive fashion during the game, then the chances of the players recognizing it as such and being able to recall it later is increased.

Nothing’s foolproof, of course. And in the course of play, other information points arise organically to confound, confuse and misdirect. But having provided the means for getting the good stuff out there, the better the chance it won’t be skipped over and it will be retained when it’s needed.

There’s more distilling of the published material. But this one is trickier, because players take the game where they want.

Still, by identifying three “must-run” encounters, the GM has at hand three comprehensive components needed for the session.

I think of encounters as three-dimensional modules, little packages of fun, that can be inserted into the framework of the session (whether it is the layout of a dungeon, the flowchart of an investigation or if the game’s gone completely off the map). Each encounter should contain any of several goodies: monsters, treasure, NPCs, traps, plot twists, ability challenges or an exotic location.

Having “must-run” encounters boxed up and ready to drop in is about keeping it fun for everyone. As a GM, nothing beats the reveal of a fun encounter. And having three that are “ready-to-go” sidesteps the little problem of the party getting sidetracked. No matter how far off the beaten track of the adventure they go, there’s an encounter directly ahead that will engage with them and keep the adventure flowing.

Broadly speaking, I think of handouts as ANYTHING that is tangible, including miniatures, combat terrain and maps, and other playing aids such as background music or sound effects.

You can always overdo this sort of thing. And it falls into “the right tool for the right job” category of adventure planning.

I mean, you don’t need stacks of Monopoly money on hand every time the PCs find a suitcase full of cash. But a couple of bills with a serial code clue written on them or having a few to dole out when an informant wants to be paid, can add to the atmosphere of the roleplay.

In theater terms, this is “staging.” Having properties on hand for presentation. Sometimes these are right-sized items, sometimes they are scale miniatures.

I always look through the text for opportunities to craft something new, given time. But over the years, if you keep stuff, you’ll have a wealth of trinkets and terrain to display or use as needed.

Those are my three priorities for preparing published adventures for the game table. But I’d like to hear yours. Share them in the comments below.