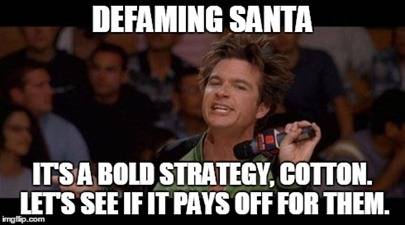 We here at the stew have a complicated relationship with the big man in red. Sure, he’s a fantastic guy who selflessly brings presents to every child in the world in a single night, but on the other hand, it sure would be nice if everyone in the world’s list of their favorite fat bearded men with red hats didn’t start with Santa. I mean we’re not asking for a sweep, or even a majority, just a token presence in the number one slot. But we realize that changing the situation requires a catalyst, so here are an assortment of evil Santa doppelgangers to put in your holiday game. We figure that has to swing public opinion at least a little, right? 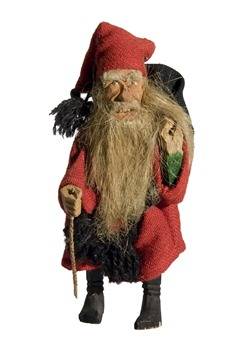 By an obscure little village in the rolling countryside is a cave that stretches deep through the rock into the fey lands. Santa’s lair is ensconced within, a dimly lit timeless realm where children toil endlessly, watched over by pale scampering things with needle teeth and eyes the size of saucers.

The village children know that if you write to Santa, wishing to be an only child, or to run away from home, or to be young forever, even if you tear up the letter right after, that sometimes on Christmas you get exactly the present you asked for.

Fewer children know that if you ask for a BB gun or a pocket knife, and have just the right spark of mischief in your heart, that Santa will bring those too. He might even leave you little surprises throughout the year, though it almost seems as if he wants you on the naughty list. And if you’re naughty enough, he just might give you a special present, the ability to move quickly and silently and see in the dark… 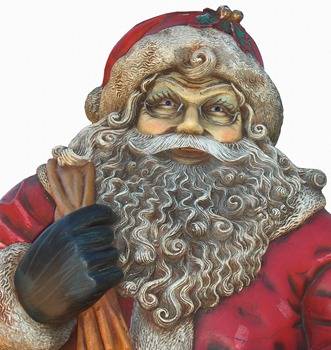 Santa can be in two wheres or even two whens at the same time, can’t he? And Santa can move through non-euclidean space to slip down your chimney, through the mail slot, the dryer vent, or just step sideways through your walls if he needs to, can’t he? Even carrying a bag of toys that opens to infinite mad vistas? So what if his beard seems to blow in the breeze even when he’s standing in your living room or that his reindeer give off a baleful and unhealthy glow? He’s just delivering toys. What’s the harm in that?

The skeptics say that the little toys and books (oh, the books, the books!) that he brings foretell misfortune and madness, that the dollies move on their own, and that the oranges he leaves in stockings bulge strangely and have a taste and color that are off… just a tad, but they’re being paranoid. Aren’t they? 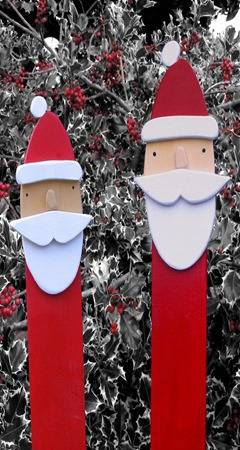 All those sightings of Santa, his sleigh, and reindeer? It’s visitors! I know it sounds crazy, but it happened to my neighbors.

I woke up Christmas eve, and there’s Santa on the roof, but he went for the window, not the chimney. I tried to call 911, but phone, TV, all of it: dead. Then he’s back out, on his sled and gone. Next morning, I invite myself over: old fruitcake. The whole house smelled… musty, dust everywhere. Whole family came down with this bad chest cold for weeks. Then they start acting weird. Practically hermits. No one would believe me. Then their cat disappears, homeschooling starts, and one day when the drapes are cracked, I see them sleeping standing up! Next Christmas eve I stayed up all night. Santa comes back, and leaves with a bunch of elves. Weird right? Next morning there’s no answer at the door, so I use their spare. I had to pull my shirt over my mouth to breathe, dust was everywhere! I checked the first bedroom, there was ropey, webby stuff all over the place and a weird husk in the corner. I ran like hell, called the cops. Guys in hazard suits show up with a tent, cleaned up all the mess. Two days later: big fire, whole place is gone. Problem solved I guess, but I’m worried. I’ve come down with this cough…

Thanks for reading, and enjoy your special day, but don’t sleep too soundly tonight. You never know who might be up on the rooftop…