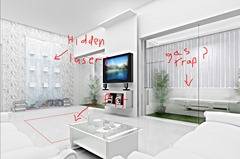 In the first three parts of The Smart Villain, we talked about general approaches to smart villains, the community, and external lair defenses.Â  This time we’re looking at interior lair defenses and tactics.Â  In our final installment we’ll discuss the smart villain’s gear.

So as the smart villain, your base has been breached. Good thing you knew this would happen and you’ve planned accordingly with: