The Mini Dungeon as a Random Encounter

One of the problems in an exploration game is content. We’d all like to put together a campaign world with content jam packed into every nook and cranny, but there are some problems with that. First and foremost is our time constraints. Not only would it take forever to create so much content, but a lot of that effort would be wasted as entire swaths of our setting never got explored closely enough to dig out most of the material. Here is one potential solution to this issue: the mini dungeon as a random encounter.

The concept is simple. You put a dungeon on your random encounter list, when that result is rolled, the players discover a dungeon. From now on, that dungeon is in the world and is a permanent fixture. It’s safe to assume that the players will ransack it once and never come back, but that’s not a big deal because it takes only a few seconds to throw it together, mark it on the map and toss off a few lines in your notes for posterity. In this way you can have a world with dungeons secreted away under ancient trees, in the cellars of fallen houses, and carved out by streams, giving the feel of a deep world with lots of time spent on tiny detail, all with almost no additional prep time.

Here’s why it’s so fast: In an earlier article I noted that the 5 room dungeon has only 9 forms. Several astute readers pointed out that by abstracting away the entrance, there were really only three forms: a straight line, a cross, and a “y”. The article goes on to give ways to differentiate these simple dungeons from one another, but they all boil down to the same few layouts. The same thing can be said of dungeons with other numbers of rooms. There is really only one form each for the one, two, and three room dungeons, and there are only two forms of the four room dungeon, a straight line and a “y”. Just pick (or heck just roll a d8 if you like) one of these, maybe apply a tweak or two from the previous article, and your layout is done quick and easy. 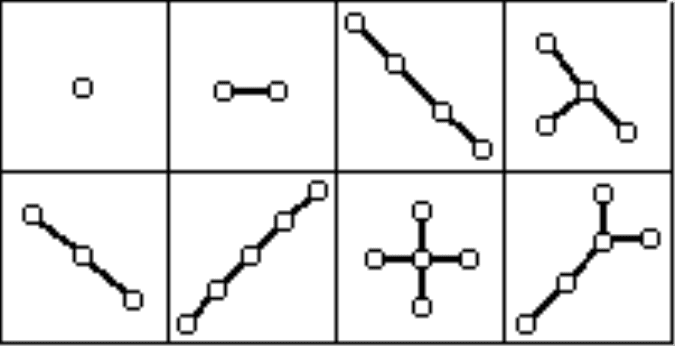 Next you’ll want to apply a little flavor. Since these are all small dungeons, it’s fine for the flavor to be uniform throughout, though if you want to make a ruined cellar that breaks into a natural cave or an old fort with a forested courtyard you’re more than welcome to. Chances are because you know where the players currently are, you know what flavors would be appropriate off the top of your head, though if you don’t want to be put on the spot, you can make up a brief “flavor table” for an area when you put a dungeon on their encounter table. Also give a quick thought to visibility. If the players have been through an area repeatedly and visibility is good, dropping down a highly visible dungeon like an abandoned keep will probably elicit a few questions so you will likely want to stick to a sinkhole or other low profile choice. On the other hand if it’s the player’s first time to an area or it’s hard to see at a distance (heavy forest, hills, etc…) there’s nothing wrong with using a wizard’s tower or other highly visible site. What flavor you choose can also help hammer home the history and particulars of your setting. If dwarves used to live in the hills but were wiped out by orc tribes, you have the perfect opportunity to showpiece that with a dusty dwarven ruin.

Finally, it’s time to stock the dungeon with traps, hazards or monsters. This is super easy. You earlier rolled on a random encounter table. Roll on it again and place that encounter in one of the rooms. Don’t feel like every room has to be filled. This isn’t a large place and it isn’t hotly contested unless you want it to be, so putting encounters in half the rooms is fine. Once you roll, if you need more encounters, either duplicate the same one, tweaking it a bit, or choose a compatible one from your list. Of course a mini dungeon is also a perfect lair for one of the tougher solo encounters from your list as well. Don’t worry too much either about dropping a tough encounter or several encounters where you would have otherwise rolled for one. There is the expectation that the danger is ramping up a little when entering a dungeon and the players can always choose to pass up the danger by walking past.

All of this takes less than a minute and, if you have that “flavor table” can actually be handled with the toss of a set of three dice. These dungeons are simple quick throwaways but they add a little extra adventure to overland travel and exploration and make your campaign world “denser” than it would otherwise be.

6 Responses to The Mini Dungeon as a Random Encounter