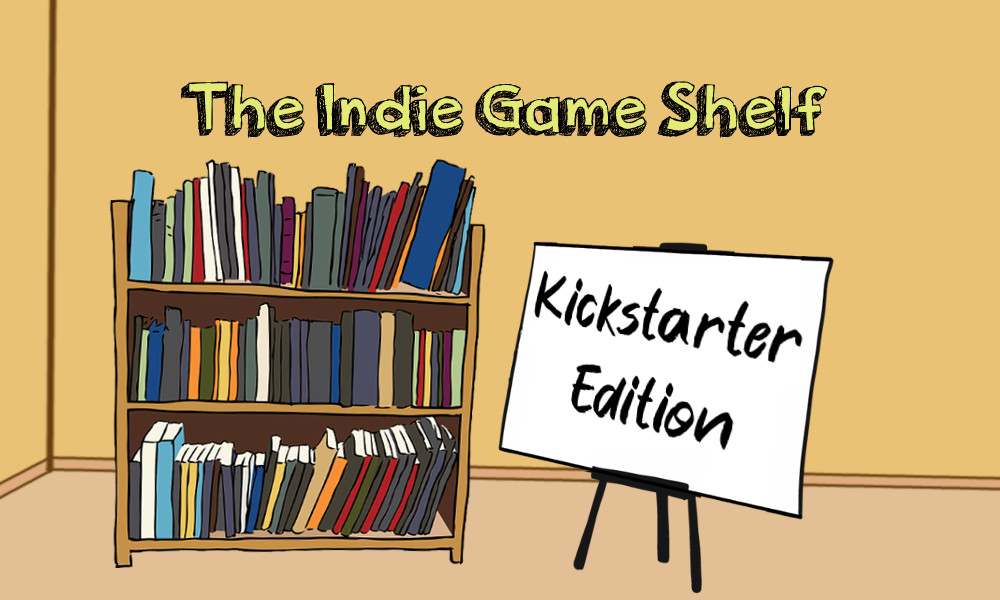 Welcome to The Indie Game Shelf! Usually, each article in this series highlights a different small press roleplaying game. In this installment, however, I’ve decided to take a look at Kickstarter as a prominent means of getting indie games to market. Plus, to help showcase the wide variety of games available, I want to highlight a few campaigns that are currently underway. Finally, to keep all of this related to the Indie Game Shelf series, I’m going to give readers the chance to help choose a game for a future article!

There’s no doubt that the crowdfunding model of financing game development, with Kickstarter being a standout in that field, has drastically changed the landscape of the tabletop hobby. Design and production of tabletop roleplaying games has exploded in recent years due in no small part to the popularity of using Kickstarter and sites like it to fund project development, particularly for first-time designers who now have a way to bring their games to market without going through an established publisher, the very definition of publishing an indie game.

For those not already familiar with this model, a brief explanation follows. Designers, writers, editors, artists, printers, technology, materials, and all the other people and tools needed to transform a cool idea into an actual game would cost some amount of money. In the traditional publishing model, that money would come from a publishing house or sometimes a self-publisher, with the funds generally coming from a single source, and hopefully those costs would be recouped once the game was published and sold. In the crowdfunding model, instead of one large investor, the game development is instead funded by tens, hundreds, maybe thousands of smaller contributions, generally consumers who want to see the product available and get a copy for themselves. Kickstarter is a website that facilitates the implementation of this model by giving creators a platform with which to advertise their idea and collect pledges from people who wish to contribute. Crowdfunding allows anyone with a design idea the chance to find people who want to buy into that idea and turn it into a game.

The leadership at Kickstarter has, in recent weeks, come under scrutiny firstly for firing employees that were organizing a union, and more recently for failing to voluntarily recognize the union. As this news made its way around gaming circles, there was a lot of talk (both from game creators and crowdfunding backers) about boycotting Kickstarter for its anti-union stance. However, (as of the time of this post) boycotting has explicitly been discouraged by Kickstarter United, the union seeking recognition, and instead displays of solidarity have emerged among creators, backers, and employees.

It is in the spirit of this solidarity that I would like to highlight just some of the indie RPG crowdfunding campaigns that are currently underway. The last several weeks have seen the launch of quite a few new RPG crowdfunding campaigns, and the collection that follows is just a sampling of what’s currently available. Not only that, but dozens of new games and supplements come up for funding every month. If you’re interested in keeping up with the latest and greatest in indie RPGs, Kickstarter is a great source of both information and games.

Below are some of the crowdfunding campaigns that, as of this post, are still available to back. They are listed in order from soonest campaign end to latest. Remember that there are even more RPGs out there than the few listed here, not to mention all the gaming supplements and other RPG-adjacent projects like dice and miniatures! The breadth of products available in the indie RPG space is as varied as the hundreds of creators all looking to bring their ideas to life.

Disposable Heroes (Oct 15) – This is a heavily modified Powered by the Apocalypse game that uses a deck of cards to represent a whole collection of ready-made characters in a highly lethal, neon-splashed, futuristic setting. The publisher, Sandy Pug Games, already has a few titles under its belt, but this is their first major physical product offering.

Heart: The City Beneath (Oct 17) – This intense dungeon-delving game by Rowan, Rook & Decard uses rules based on the Resistance system and takes place in the same world as one of RR&D’s earlier products, Spire. This campaign that has already exceeded its initial funding goal, and the additional funds, besides backing common extras like more art and writing, are also going toward a developer commentary podcast and even a game soundtrack.

The Nuadan Chronicles (Oct 25) – This game is a sizable two-volume undertaking detailing a “post-post-apocalyptic electro fantasy” setting featuring strange technology and fantastic magic. The design follows a traditional model and the narrative centers on a mercenary-adventurer party in a dangerous and largely unexplored world. The game is the inaugural offering from Brooke and Jason Junker, the married couple design team at BrokenDice.

Agon (Oct 25) – Agon is a game about epic heroic adventures in a mythic fantasy setting. The publisher, Evil Hat Productions, is perhaps best known for Fate (and many such associated games like Dresden Files), but it is also the production house behind such greats as Blades in the Dark, For the Queen, Monster of the Week, and many more. This campaign is for funding an updated edition of this 2006 classic from designer John Harper, who is not only behind the aforementioned Blades in the Dark, but also the much-hacked free game Lasers & Feelings.

Visigoths vs. Mall Goths (Oct 31) – This self-described “tabletop roleplaying game and dating sim” pits Rome-sacking warriors against 90s spooky teens. This is a self-publishing effort by designer Lucian Kahn who has several titles already under his belt including Dead Friend and Grandma’s Drinking Song (a game featured in an issue of The Gauntlet‘s Codex zine and which is played using an actual onion), but this is his first game design to be launched on Kickstarter.

Haunted West (Nov 1) – This alternate history Weird West game proposes wild west adventures while highlighting heroes in those adventures that have been largely forgotten by our own history. The game posits an alternate course of American history with the addition of fantastical horror elements for a truly fresh take on the Old West. This is the second offering from designer Chris Spivey of Darker Hue Studios who took the indie RPG scene by storm with his previous work, Harlem Unbound.

Ross Rifles (Nov 4) – In contrast to a fantastic alternate history as presented above, Ross Rifles instead deals with an all-too-real and more recent piece of history by telling the stories of soldiers in the Canadian Expeditionary Force fighting in the trenches of World War One. The game looks to focus on the character drama and violence of brutal warfare, life in the trenches, and the terror of no man’s land. This Powered by the Apocalypse offering is the first Kickstarter outing by Dundas West Games, and one of the designers is Gnome Stew‘s own Daniel Kwan!

Just as there’s no shortage of great indie RPGs on Kickstarter, there’s also no shortage of information sources for what’s out there. If, however, you want comprehensive regular overviews, I can’t recommend enough the “Crowdfunding Collection” series on the blog Teylen’s RPG Corner by Jennifer Fuss. Jennifer posts weekly updates on pretty much the whole world of RPG crowdfunding, and for the indie RPG fan, there’s always something new and interesting to check out!

Finally, at this point I normally ask if there are any games on your shelf that you’d like to highlight and to share them in the comments section below. However, since this article already mentions so many games, I want to hear what you’re excited about that has yet to make your shelf! Tell me what crowdfunding game you’re interested in, (whether listed above or not) and I’ll see about highlighting it in a future installment of The Indie Game Shelf! This time we can fill my shelf together!

Rob is a freelance game writer, game editor, podcast editor, social media manager, and programmer. He can sometimes be found wandering RPG conventions in the northeastern U.S. or at home in New York City with his family of loving humans and disdainful cats. Learn more at RobAbrazado.com.