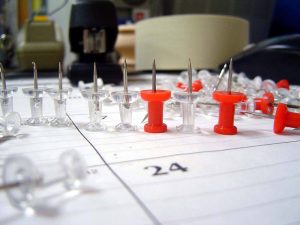 I’ve heard rumors of an elusive, mythical creature: gaming groups that actually meet on a consistent, reliable schedule over a period of years. The legend says that they always meet on the same day, at the same time, and usually at the same place. I’m not sure such a thing actually exists, but I’m more than a little envious if it does. Every gaming group I’ve been part of since the end of college has difficulty with that whole ‘regular game night’ thing. I’ve been lucky with my current group as far as longevity goes, but we’ve had difficulty keeping a regular schedule each month.

In the beginning, when everything was fresh and new, we were getting together every Friday without fail. Then, steadily, ‘real life’ crept in. There was work, both old and new, sometimes with conflicting schedules. There were kids for some of us and various other obligations for everyone. Eventually, apathy also crept in and it could be a couple of months before we got together to play. On top of this, we were having issues keeping a single campaign going for any length of time. Something had to be done if the gaming group was to survive. I had fought hard enough to find a good group of players that I wasn’t about to let it die. I stepped in and became the group’s Event Planner.

It’s a job that anyone in the group can pick up and run with, but many players will look to their GM for organization and guidance on the group’s schedule. As it turns out, sometimes the organization a GM has to do goes beyond just the game prep. Occasionally, the job is going to fall into your lap and you’ll end up in charge. It’s not always easy, but it’s sometimes necessary to ensure the health of a gaming group.

It’s not for nothing that several friends often refer to the duty of organizing gamers as ‘herding cats’. Luckily for all of us GMs and organizational types, there are plenty of ways to manage a group’s planning: 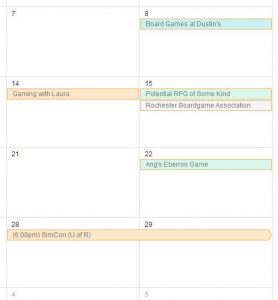 Google is about as ubiquitous as can be in this digital age, so it’s highly likely that most of your players have a Google account. This gives access to Google Calendar which is a pretty handy app to use, both personally and for groups. It’s pretty easy to set up a calendar and share it with other people via their Google account. In addition to being able to put events down in the calendar, you can also put reminders in them to send people e-mails a certain amount of time ahead of an event.

I’ve been part of a couple of groups that have used Google Calendar to keep track of game nights and potential conflicts. For my current group, I try and put down potential game dates far enough in advance that we can accommodate any conflicts that come up. People with access can put in their own events as well. I always make sure to include any gaming conventions on the schedule so even the folks that aren’t as addicted to them as I am have a chance to attend.

Not everyone is that into Google (don’t tell them, they’ll be heartbroken), but even the most Luddite of Luddites should still have an e-mail address. Even if die hard grognards would prefer carrier pigeon, you can probably talk them into checking their e-mail once in a while. An e-mail chain can be used to discuss potential dates, determine who’s hosting, or even just remind everyone that a previously agreed upon date is coming up.

Even with using Google Calendar, my group still needs the occasional reminder of the dates we’ve decided to play. The e-mail chain lets us talk about plans for that specific night in a pretty easy to use format. We decide everything from what we’re doing for dinner, to who’s hosting the game that night, to who’s actually running something that night. 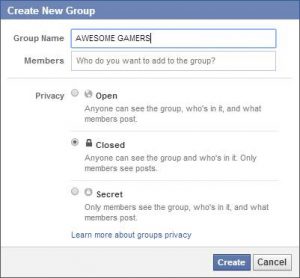 Facebook offers another pretty slick alternative to coordinating via their groups feature. It’s quite simple to set up a group, make it private and invite only the members of your gaming group. The group allows easy communication between everyone and also gives the opportunity to share outside links or other information. Of course, the drawback is that it’s Facebook. Not everyone is a fan and the way Facebook feeds info to its users can be fairly arcane. Alternatively you could use Google+ and I’m sure there’s even a way to use Twitter (Twitter scares me, though, so I don’t know for sure).

While my current group doesn’t use a Facebook group, I have some extended groups of con friends that use Facebook groups to good effect, helping coordinate our occasional meet-ups or making our con schedules work for maximum socialization.

Each gaming group is going to be different, so make sure to find the method that fits for your group. Never let the gaming fade into apathy! Do you have any suggestions on other methods to use?

20 Responses to The Event Planner