The Buzz About The Giant Bee 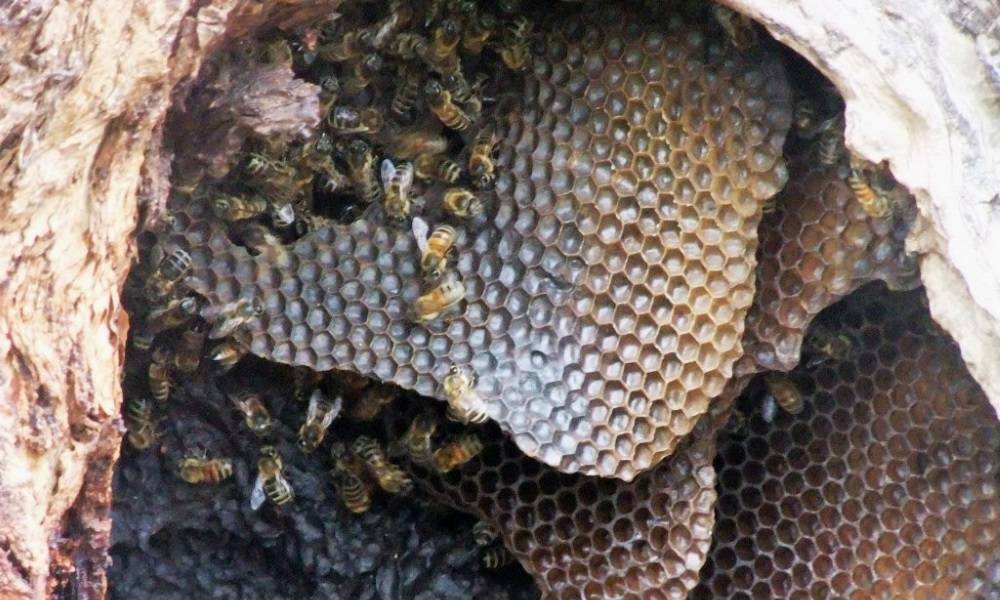 Bees. Bees have an interesting place in our world today. Not exactly domesticated, they are still an incredibly important resource for agriculture, pollinating billions of dollars of crops annually, and the source of an amazing food product.

Let me tell you a story about one of my characters from years back. The character themselves was rather unremarkable. I don’t remember much about them, but one of our first adventures involved scouting out a system of natural rose quartz canyons. In one of them we discovered a nest of dire bees. We didn’t need to mess with them and they were a difficult encounter for us, so we left them alone. My character scraped together his gold, bought the land rights to the canyons and spent the rest of the campaign hiring glassblowers, alchemists, scribes, builders and soldiers and spending his downtime between adventures setting up trade contracts for his dire bee honey (in attractive rose glass flasks).

So let’s take a closer look at this fantastic relative of the common bee, the dire bee. Dire bees can be about five feet long, and build nests of about one and a half million cubic feet in volume (an orb ~140 feet in diameter or a cube ~110 feet on a side). In temperate climates these nests are usually built in dark enclosed spaces such as caves, huge trees, or abandoned buildings – with a preference for high places if available. In tropical climates, nests are more likely to be built in the open if no enclosed area is available. While these hives are often hidden from sight, the noise they produce – and the comings and goings of worker bees who can forage up to several hundred miles from the hive – makes it almost impossible to stumble upon one unaware.

While the standard drone dire bee isn’t a particularly deadly foe, they are dangerous in swarms – and bulkier soldiers and even larger royal varieties exist. In addition, some species have unique attacks, such as a variety that creates a zone of heat attack if they surround a target (some real life bees use this tactic to kill much larger hornets). Most dire bees won’t attack unless provoked, but aggressive species do exist, and they are attracted to bright colors – often driving them to investigate humans and their habitats.

Dire bees collect no treasure aside from the honey they produce, but incidental spoils can often be found near their hives left over from interlopers who got too close. Careful scavengers can often get a meal or some treasure this way. Adventurers with nerves of steel can sometimes sneak into a nest and gather up some honey. A typical dire bee nest can produce a ton or more of honey over the course of a year, though transporting out large quantities of it is a logistic nightmare. Dire bee chitin is strong and valuable, and of course just like real world bees, dire bees are effective pollinators – so lands close to a hive are often extra productive.

Infiltrating a dire bee nest can be made less dangerous by the application of certain varieties of smoke, application of the correct oils or chemicals to one’s body or even application of illusions or other magic which can either keep dire bees sluggish or fool them into not noticing an intruder.

The honey of a dire bee nest is largely similar to real honey, but access to large amounts of fantastic plants can create honey with weak magical effects. In addition, even more fantastic varieties of dire bee are said to exist with equally amazing properties to their honey.

A clever town may form the same kind of relationship with dire bees that we have today, providing them with cropland from which the bees can harvest pollen, while harvesting and selling honey under the protection of a local alchemist or hedge mage. In addition, the two can engage in a mutually beneficial protection arrangement. In other areas this arrangement might be overseen by the local druid or shaman, or the hive might simply be raided for honey and chitin on occasion.

Adventures around the dire bee:

Dire bees are one of many traditional role playing game “monsters” that actually have a lot of applications more interesting than sacks of xp and treasure. What is your favorite monster with overlooked depth?

1 Response to The Buzz About The Giant Bee