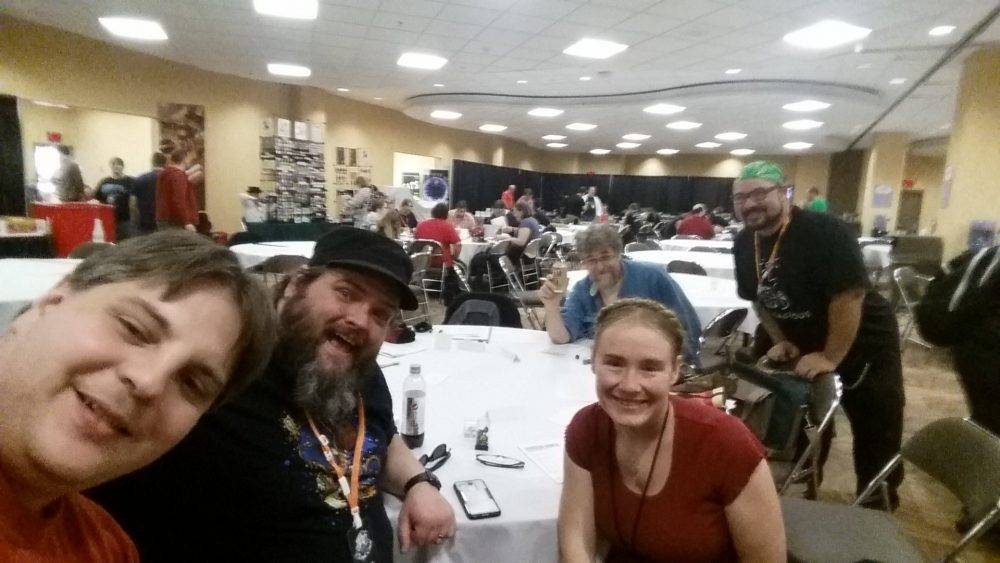 No we’re not talking about heists or con artists, but Long Convention Games. So let’s answer the first obvious question – what is a Long Con? From what I’ve been able to gather from talking to multiple people, it is a convention game that lasts multiple sessions. I’ve found three to be typical, but I believe there have been two session versions and longer session versions of the long con. With that said, the long con feels a lot like a mini-campaign or even a regular campaign. I know theÂ Dungeon World long con I just ran at the QCC felt a lot like a campaign that had a beginning, middle, and end. It was one solid story arc.

There’s probably a lot of ways to structure a long con, but this is how I did it for Odvek’s Castle, my Dungeon World long con. I don’t do a lot of up front prep for myÂ Dungeon World games, but I do a lot of what is called foundational prep. Odvek’s Castle was set up with a point crawl map, a map of the main entrance to the castle, and an idea of what was going on inside the castle for the characters to get involved in. Lets move on to the sessions.

Since it’sÂ Dungeon World and I have playbooks, the first thing I do is have the players make their characters and connect themselves to each other. While we’re making characters I’m asking questions about what happened to them to give them their looks, why they wear what they wear, and how their skills came to be. I’m getting to know the characters. Then I have them do the bonds thing where they connect themselves to each other. Last, I have some questions about a specific item called the Statue of Odvek, which can answer any one question the characters might have. Once I have that, we start playing and I let the setting breath for a while, have the players settle into their characters, and give them time to get a feel for me and let myself get a feel for them. When we were getting ready to end the session I dropped a cliffhanger to pique their interest for next time. Now let’s break down what I was doing there, which can be used in any long con:

At the end of Session I dropped a tidbit that made them think there was something more going on than they realized at the beginning. They found the Statue of Odvek, which was sentient and became an NPC. They eventually named it Rook, since it didn’t actually have a name before that. It said something about “She’s in control.” Â So with that ending I could have just picked up next session with them speaking with Rook, but instead I asked them if they’d let me set a scene. They agreed, so I went with action. I had the bard and wizard running away and a giant stone statue with a shards of stained glass arm chasing them. Each shard contained the image of a woman’s face who didn’t look very pleased with them. It had just kicked the dwarven fighter through the wall, no damage because I was just dropping in some flavor, and the rogue was riding on the statue’s back–I like to start with a bang if I can.

From there they split up and escaped from the statue into the Halls of Chaos, where they started learning things about the castle, the background, and their actual foe, Petra–the one time apprentice to Odvek. There were a variety of encounters and some magical items found. Rook was there for me to use to interact with the party, and they found a mechanoid construct which had a telescopic lens that let someone see the magical patterns of the castle.

Eventually, they retreated from the castle back to the safety of the courtyard of the motte-and-bailey structure, which is where their base camp was. There – with all the information they gained about Petra – they plotted their next move, interacted with some of the NPCs who had set up shop in the courtyard, and before they were going to go back into the castle someone new entered the courtyard. It was the bard character’s background coming to haunt them, as their was a bounty on him for sleeping with a noble–which was a no no. That’s where we ended, with another cliffhanger, setting up a final session where they were going to confront Petra before she pulled off her plan to ascend to godhood. Once again let’s look at what I was doing here in a more general sense:

Middles are hard because there’s not really a resolution that you can have. Maybe it’s getting the MacGuffin that sets up the final act. This could be anything from an item to some bit of knowledge. The try fail cycle is a good one to use, as they try and fail to get what they need until they succeed. Another is gathering information which leads to other places to get more information. This ends once your characters have the information they need to try out a plan to deal with the situation. You could also have one or more unresolved threads, and you have the hook into part three, then you can wrap up and get ready for the final session.

Session III started with the end of Session II since I had a charged situation. They dealt with the bounty hunter and his comrades by using a bit of persuasion and a dagger to the throat. Then it was back into the castle to find a magic baton for the bard before finally going off to deal with Petra. They descended into where she was performing the ritual, and one of the players pulled me aside to ask if they could possibly die and have their story continue on. I did one better and brought their story to the final encounter. The dwarf had a beef with the Troll King so I had Petra Summon the Troll King during the final conflict. This conflict consisted of different versions of Petra as her main version was attempting to ascend to godhood in a ritual that Odvek once achieved. The PCs disrupted the ritual and Petra was supposedly killed, disappearing into a pit of blackness. After that I gave the players a chance to give some epilogues for their characters. Now lets talk about the break down:

There’s the Long Con. I hope you enjoyed this article and if you have an questions or comments, or have done the long con yourself, please let me know in the comments. I’m planning on doing more of these in the future and I’d love to have your input and ideas so I can get better at this style of game.