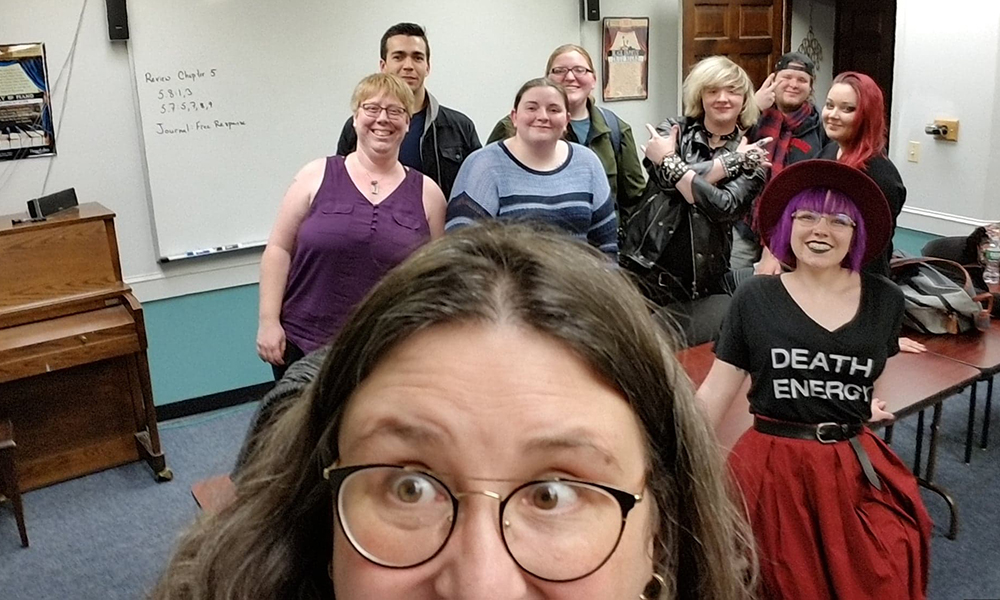 My #tableselfie for the class. I forgot to take it until the end, so we missed a couple students.

Last week, I had the privilege of speaking to an honors seminar class at Finger Lakes Community College. The class was called Storytelling and Games, and I was asked if I was interested in coming in to talk to the class about narrative in roleplaying games. Was I interested? Ooh boy, was I ever!

Of course, the closer we got to the date, the more nervous I got. It was a two-hour class that met once a week with about twelve students. I wouldn’t be overwhelmed by a large audience, but I still wanted to make sure I gave them a good presentation. My friend, the instructor who invited me, had let me know they were a bunch of awesome nerds, and whatever I brought in should be fine. While all of them were definitely folk of a nerdy flavor, only a few of them had actually played table top RPGs before.

So, what did I do? Well, first, I talked about the history of RPGs and how narrative was kind of an accidental byproduct of early games. I’m sure some grognard somewhere is screaming sacrilege, but RPGs were born out of miniature wargames. The theming of early games was on point right from the beginning, but rules that lead to the story the game’s theme promised weren’t really there yet. Obviously, something about the characters and the stories that did come out of games was captivating, otherwise those original players would have wandered back to minis and wargames.

As games evolved, the narrative they were advertising became more and more important. In the early 90’s, Vampire: the Masquerade debuted and they called the game runner a storyteller, right out of the gate. The rules still had some issues lining up the story of a monster’s struggle with its own humanity with the rules as presented, but the mechanics were getting closer. Then there was the D20 Boom of the early 00’s. In the shadow of D&D 3.0 and all the other publishers making D20 compatible products, an indie aesthetic arose in designers looking for something different. Slowly, the idea of aligning the mechanics for the story the game is promising became more prominent and part of many designers’ goals.

This wasn’t a history class, though, so I kept the lecture to a minimum. I wanted to frame the games I was presenting to them to show the evolution of the hobby and how modern games build the narrative into the core fabric of the game. What I really wanted to do was SHOW them how roleplaying games work. 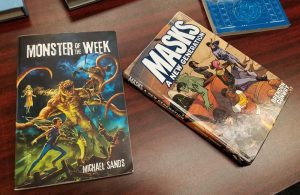 I split the class in two and gave one half Monster of the Week playbooks and the other half Masks playbooks. Both games have very strong, easy to understand themes and the playbooks do a good job of guiding character creation quickly. Because both games have a large number of playbooks, I could have stuck with one or another based on the number of students, but I felt it was more realistic to divide them into groups that were better representative of what an actual gaming table might have. We wouldn’t be able to get in a full game, but I still wanted to give them a taste of it all.

The Monster of the Week crew chose a Monstrous, a Crooked, a Spell-Slinger, and a Chosen. After they worked through their playbooks, we ended up with a Chosen that didn’t really understand that he was destined for something important, but kept being nudged by outside forces into saving the day. The Crooked was a pick-pocket who acted like he was made of Teflon because nothing bad could stick to him. The Spell-Slinger started off as a direct homage to Harry Dresden, but ended up with a little Karrin Murphy flavor in there as well. The Monstrous was a vampire that had decided humanity was getting too good at creating evil on its own, so out of self-preservation, she was working for the good guys to keep the world from going to complete crap. 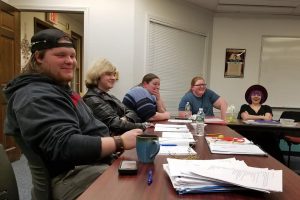 The Masks group chose a Transformed, a Delinquent, a Doomed, an Outsider, and a Bull. The Transformed was a metal dude trying to figure out how to still be a normal kid in his new body. The Delinquent developed his powers naturally and just used them to get even more rebellious with his illegal urban exploration. The Bull was an ex-football player that got experimented on, but ended up rescuing all the other kids getting experimented on with them. The Outsider came from the planet Glarfunk, was bright blue with bizarre hair, and never ever passed for normal. The Doomed, on the other hand, was normal enough that her primary enemy was a high school bully that was trying to kill her off.

Once we got the basics of the characters out of the way, we did connections. I did this to show how you can build the narrative of the game at the beginning by interweaving all of the characters together. With the Masks group, most of them revolved their connections around the Bull. During a regular game, I would have pushed them to spread their connections around, but they were all having so much fun making the Bull their social linchpin, I didn’t want to stop them. For the monster hunters of Monster of the Week, the connections weren’t as cohesive and took a little more prodding. In the end, they eventually came up with enough connections to logically explain why they were all in Houston working together to stop a cult trying to summon a major demon.

With the connections out of the way, I ran a quick scene for each group. With each, I tried to demonstrate how the story builds from the scene I set as the GM, but evolved from the actions they took. RPGs should be a collaborative affair, after all.

With the Masks kids, like you sometimes see with new players, I had to nudge them into acting on what they were seeing. They were all super into the world building during character creation, but weren’t sure how to dive into the game once we got rolling. The scene I set for them was a mall that was being attacked by someone or something. One fun thing that happened early was me being able to demonstrate how their ideas can help influence the game. I described the wreckage of a Build-A-Bear store and one of the players asked if they were going to be fighting a giant stuffed bear? Yes, yes you are. Eventually they started to get more proactive and after a couple of times around the table, I ended on a cliffhanger, letting them discover that their real enemy was a little girl on the merry-go-round, animating giant dolls and statues as her ‘friends’. 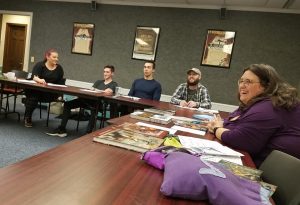 For Monster of the Week, I gave them a setup where the cult they were fighting against had kidnapped a bunch of innocent civilians and was about to sacrifice them on the floor of the Houston Texan’s stadium. Right out of the gate, I had to have a talk about tone. Again, as you sometimes see with newer players, they were a little more bloodthirsty than the tone of the game calls for. The Crooked’s solution for dealing with the cultists was to blow up the stadium and the kidnapped people would be ‘acceptable casualties’. I pointed out that they are supposed to be the heroes and blowing up innocent civilians goes against that. If it had been a full game, I would have spent more time guiding them into the proper tone of the game, but that was a luxury we didn’t have. In the end, as is often the case in Monster of the Week, the dice made things go sideways anyway. When I ended it, the explosion didn’t go off like they had hoped and the vampire was being held by the cult leader as an acceptable sacrificial alternative.

I had a really fun time with the class and I hope to get the chance to do it again in the future. The students all said they had fun, and I’ve been told that a couple of them expressed that they really enjoyed their first taste of RPGs. Huge thanks to April Broughton for inviting me to the class and good luck to all the students!