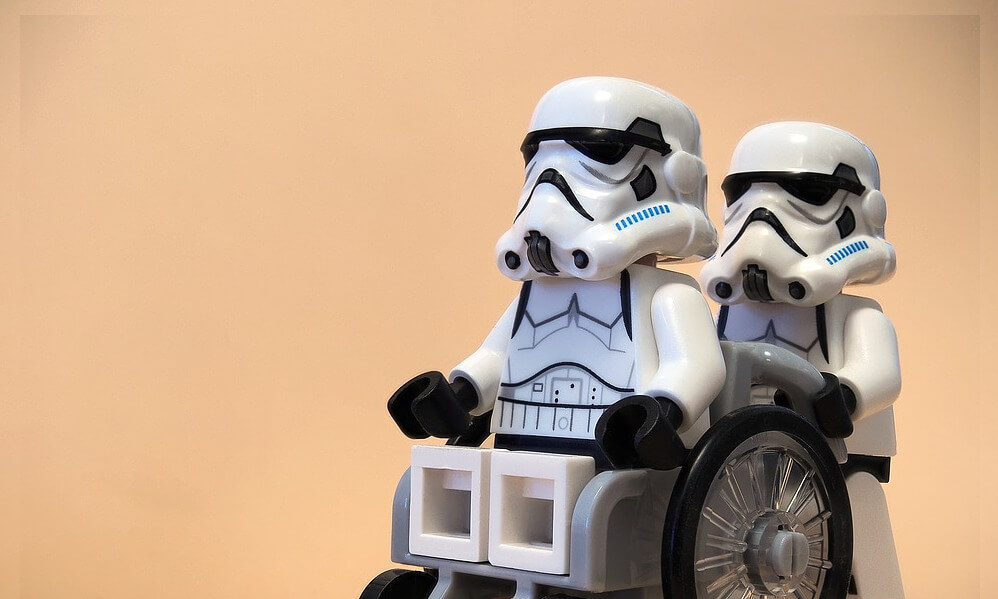 He ain’t heavy, he’s my clone. (Image Courtesy of Pixabay.com)

A couple of months ago, a friend sent me this great Lifehacker article about how using audio descriptions in streamed content can help teach the fine art of providing enough (but not too much) description as a GM.Â Audio descriptions, initially intended to make media more accessible, also have the delightful side-effect of creating a tool that has the potential to help everyone have a better time of it. This phenomenon, usually called the “Curb Cut Effect” refers to how making something more accessible for some people ultimately makes things better for everyone. It takes its name from those small ramps (or “cuts”) that you find on curbs near crosswalks. These were originally intended for those with wheelchairs or other mobility considerations to be able to get up on sidewalks without being hit by the nearest bus. However, if you’ve ever pushed a stroller, had to jump a curb with a shopping cart, or had the kind of Saturday night that leads to a greater-than-average number of stumbles (*cough*), you’ll have noticed that clever little piece of design is useful in a whole lot of ways.

Of course, the biggest benefit of accessibility is, and will always be, accessibility. More accessible games mean fewer people being shut out for reasons that have nothing to do with the games they want to play or run. Fewer people being shut out means more different perspectives on this hobby we all love. More perspectives means (and I cannot highlight this enough), more stuff for us to play with. We live in a world with D&D and Pathfinder and Blue Rose and Harlem Unbound and Monsterhearts and Bluebeard’s Bride and the Cortex System and the Pip System and the Cypher System and Dread and literally hundreds of other games full of unique and interesting stories and mechanics. No single person, no matter how brilliant or driven, could ever, ever come up with all of those things on their own. Making space for more people at our tables makes our tables better in every way we could imagine.

Which brings me to an important point. I don’t personally have any accessibility concerns. I’m lucky enough to be able to cruise through most situations without being made aware of my limitations. However, I have some friends who do have these considerations, and I try my best to listen to them. My life is immeasurably better for having those folks in my life and at my table when I’m lucky enough to play with them, but I’m not an authority on any of this.

Look: I’m a half-functional manchild, barely able to dress myself in the morning, and I’ve been doing that since at least high school.

However, with all of that said, I can now climb down off of my soapbox and present to you 4 Ways to Make Your Game Better By Making It More Accessible.

Turn On Audio Descriptions When you Watch TV

How it can make your game better: If you’re not used to it, the experience of listening to descriptions as they take place is jarring at first, but very rapidly the descriptions begin to recede into the background of your attention, and you begin unconsciously following along with the meter and language of that description. If you’re anything like me, you’ll find yourself moving faster and more evocatively in your descriptions almost immediately.

Accessibility Functions: People with mobility concerns or mobility aids like canes need clear walkways and adequate space between tables, walls and chairs. Cluttered surroundings can lead to your friends struggling to move around in the space you’ve set up for them, or in extreme cases, not being able to participate at all.

How it can make your game better: Paying attention to how your space is laid out helps all of your players move in and out to grab snacks, quickly step away from the table without disrupting others, and, for an added bonus, helps make cleanup quicker and easier, too.

Accessibility Functions: Players or GMs with joint, back, or muscular problems, attention issues, or some conditions like Crohn’s disease need to take breaks more frequently than players without those issues.

How it can make your game better: Getting into the habit of taking more frequent breaks (five minutes or so every hour or hour-and-a-half of gameplay) helps to keep your players fresh, and allows them to plan their next moves. It also takes the pressure off of you as a GM to keep the game running for long stretches of time. When setting the expectation for frequent breaks, it also helps maintain focus during other times, since everyone knows that there will be another break coming soon, and provides a convenient stopping point for a session.

Note that it’s critical to keep short breaks short–especially at first, it’s very easy to allow a five-minute break to stretch into a ten-minute or fifteen-minute break, but that can very rapidly turn into not getting to play at all. Having frequent breaks means everything that isn’t a break needs to stay on task.

Accessibility Functions: Above and beyond their use in helping to drive clarity in game play, visual aids can help Deaf and hard of hearing players keep track of what’s going on, especially when they may otherwise miss out on spoken conversations between players. They can also help ameliorate the impact some players with auditory processing issues may have in crowded, noisy environments like conventions.Â  However, players and GMs with ADHD, dyslexia, and visual impairment sometimes struggle to read rules or handouts that are overly long or designed for those with sharper vision.

How it can make your game better: There are a few clear ways that paying closer attention to how your visual aids are designed can help you and your players enjoy your handouts more. Paying attention to this kind of thing is 25% graphic design, 50% writing, 30% putting yourself in someone else’s shoes, and 7% being terrible at arithmetic. But don’t let that intimidate you; if you’re thinking about this at all, you’re already light years ahead of many GMs.

So what do you think? Do you do anything at your table to help make it easier for your players or GM to engage?