Storium As A Campaign Chronicle

In a previous article, I talk about discovering Storium, an online narrative game that provides a framework and a mechanic for an online role-playing game with a play by post sort of framework. My own game is going on pretty well, if at a slow pace because of our time constraints, but it is really scratching my gaming itch.

Storium is about to move into it’s Gamma phase of testing, but it is available for early sign ups. As I was narrating a scene the other day, I had a brilliant realization:

Storium is perfect to integrate into your tabletop games as a campaign chronicle and an in-between session gaming platform.

Because of the pacing of Storium (GM narrates, players get an email and respond, playing their cards as they move along against challenges the Game Master sets up), it is a perfect tool to use to fill in the less action oriented bits of gaming in between sessions, especially if you usually only get to game once a month or so.Â  The scenario I envision goes like this:

The normally “slower” elements of a game get taken care of outside of the precious and limited gaming time, the players get to take more time to act out their characters and develop their backstories and personal interactions, and the game as a whole comes together more smoothly. 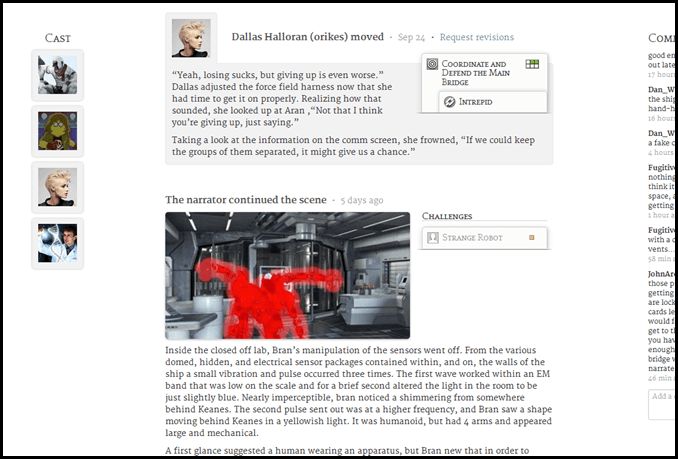 If I were running a game of Shadowrun, often notorious for players getting stuck in planning paralysis, Storium would allow me to narrate the meeting with the Mr. Johnson and have the players do their planning/recon in a way that takes time and lets them interact with it as they will, but doesn’t take up time at the table. The players will get to “act out” their characters sneaking around, hacking into the building security, tailing suspects, and their actions will all be written down for later. When you come back to the table, you are ready to go for the action and adventure and can reference the Storium chronicle that is stored online. When that session is done, you write a recap of how it went in the scene and move on to the next scene which will set up your next game.

I’ve seen many games attempt to fill the downtime with journals from the players and emails back and forth to keep the action moving, but I’ve rarely seen it work well. Storium provides a perfect framework for this, creating a second game that integrates into the in-person game you play. What do you think of this method? Do you have your own way of keeping the action moving out of session?

5 Responses to Storium As A Campaign Chronicle