So, last night I did a G+ interview with Brian F’N Patterson (d20 monkey) and Tracy Barnet (Iron Edda, School Daze) of Exploding Rogue Studios about their new Kickstarter called Karthun: Lands Of Conflict. I’m already a backer of this kickstarter because of the people involved, but also because I love the idea of a setting without aÂ system in the way they are doing it. Tracy’s work on his other games always amazes me and Brian’s work on d20Monkey just captivates me every time he updates. The one thing that doing this interview told me (aside from the fact that I need a better microphone and to get more sleep so I don’t have bags under my eyes) is that my money is well spent and I can’t wait to see the final product.

Karthun is a setting book, which is actually a pretty tough sell these days. Settings are awesome, but everybody has one and there are a ton of settings out there. Karthun is a setting with some very interesting twists, which you know if you read d20monkey. Karthun will hit you in the old school fantasy gaming feels area, but it will do it sideways by giving youÂ  an incredible and original mythology that immediately grabs you and makes you want to play in that world. In Karthun, it seems like nothing comes without sacrifice. Magic is most often reliant on bonding to an elemental and giving up some part of your soul and will. I think it is best summed up by this scene from the comic where they kill the BBEG, only to discover that the Jinn bound to his soul is now free in the world to wreak havoc. This is only a few comics after a player gives over to the power of the death that resides within her in order to defeat the tank monster attacking the party. 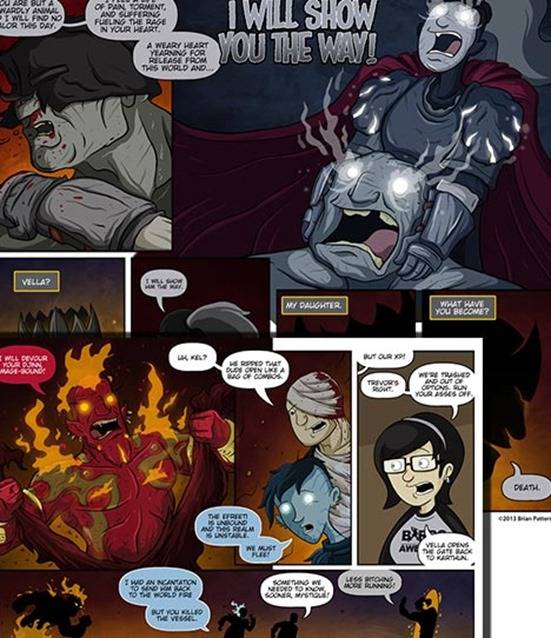 The Karthun Kickstarter was originally about funding a setting book. I really like straight setting books when they have something unique to offer, and Karthun has a horde of uniqueness to offer. With just a straight setting to use, you aren’t constrained by what the system is made to support. Karthun isn’t tied down to classes or mechanics, and so it can explore a lot of the space that comes with freedom. What would a world be like if death were a thing to be feared instead of an ending. What if the myths you get told are actually all true, and berserker rage could find anyone.Â  That is what Karthun represents to me, this incredible world where magic is everywhere and it is not friendly, where possibility reigns supreme and you don’t necessarily have all the answers in a nice two sentence rule in how to handle death.

Now, that isn’t to say that you’re going to be on your own running a game in a Karthun setting. The Kickstarter has reached a stretch goal that has made a GM’s guide PDF that covers some system rules available. What game systems are going to be covered? 6 of them, all written by individuals known for their mastery of those systems.

Why I’m Beating This Drum & Why I Backed The Kickstarter

So, if it sounds like I’m fanboying out a bit, it is because I am. There is a lot to like here, and the system neutral system aspect draws me to it in a very big way. Karthun was first shown to the world at large through d20Monkey, and that made me realize how much I like learning about a setting without having it attached to a rules system. It feels more pure, even if you can see the inspirations underneath. It takes off a lot of the chains and makes it easier to interact with the setting and the awesomeness there without feeling like you have to do things in someone else’s way necessarily.

What’s Next And Why You Should Back The Kickstarter

As of the writing of this article, the kickstarter is very close to getting the size of the setting book doubled. While I was a backer from the very first day, talking to Tracy and Brian showcased a lot of cool things about how they plan to create the book. If they reach the expanded stretch goal, there is going to be a gazetteer style focus to parts of the book that goes in depth into a lot of the interesting places of the world, like the Cinderhaunt. The writing style that Tracy and Brian are going to bring to the table will focus on showcasing the cool elements, but will make use of callouts and sidebars to focus in on the incredible ideas and concepts. While art will primarily be Brian’s handiwork, hitting their next stretch goal will enable them to bring in other artists to add unique style and elements into the mix.

All in all, there is definitely a reason that Karthun just jumped past double what it initially asked for and still has half the kickstarter left to reach stretch goals. It’s impressive and inspiring. It makes you think about some common tropes in totally new ways. The book itself promises to be an incredible read, and I can’t wait to see the end result.

Since we are talking about settings and systems, what setting would you have loved to see as a system neutral book that went more in depth into the world? What setting do you feel works, just not with the system it is tied to?

2 Responses to Karthun Lands Of Conflict