Seven ways to Spice up Your Treasure 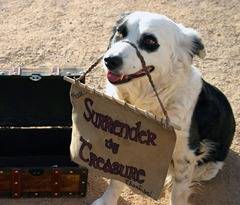 The post-combat treasure handout can be the most electric and exciting moment in a lot of RPGs, especially traditional dungeon crawl oriented campaigns, but it has one fatal flaw:  the nature of the treasure itself. All too often, treasure is codified and organized in a way that destroys a GMs carefully crafted sense of wonder and immersion. Instead, players are given a laundry list of coins and items as if they were neatly packaged and stacked like cordwood. “5 short swords, 6 suits of chainmail, 50gp, 20sp, 80cp, and a long sword engraved with runes.” Hmmm…. Wonder what we should try casting detect magic on? And coins always in groups of ten? Are these bad guys carrying their change in roll form? Of course, there’s a reason for this efficient treasure distribution. Earlier RPGs may have confused tedious record keeping with realism or immersion, but that concept was put out to pasture long ago, and treasure was made simple and easy to deal with. Unfortunately, this also made the process about as exciting as a trip to the dentist, relying on the treasure itself for the excitement. Then, in a remarkable step forwards for mechanics, treasure was broken down into components to be reassembled from tables. This had the effect of expanding the available magic item pool from dozens of unique items to millions of combinations, but it also turned magical items from special legendary items to mass produced cookie cutter garbage. True, handing out treasure is never a bad thing per se, but there are ways to make it better, not all of which involve stepping up the amount of work you have to pour into treasure generation.

Since there are as many ways to spice up your treasure as there are types of treasure, this is a two-part article. Part one is focused on non-magical treasure, while part two is mostly focused on magic treasure.

Random values:
You’ve already heard the “coins in groups of ten” joke, so we’ll give it a pass here, but the fix for this is fairly simple. If your system uses set coin bundles, a die roll added or subtracted to the amount will give it a more random appearance. As long as the die rolls are random and subtract as often as they add, it won’t affect your long term treasure allocation at all. If you’ve got a calculator handy, adding/subtracting a percent instead of a set value will work even better, as it scales with the magnitude of treasure.

Trade Goods:
I don’t know about you, but when I’m on the players’ side of the screen, many of my characters are compulsive hoarders. Inkwell and quill? I’ll take it. One dirty orc shoe? Mine. Fine mahogany paneling? There’s a reason I have “exotic weapon proficiency: crowbar” and “craft: carpentry” on my character sheet. For the record, this is the reason that bags of holding have become increasingly scarce when I play. There are two lessons I learned from this. One: most other players find it annoying when you hold up the game for an hour figuring out how to pry the gold symbols out of the glazed flooring with only a stone sarcophagus and some bottles of acid as tools. (give me a shout out if you remember this one guys!)
Two: scattering mundane items in treasure to add flavor can be a lot of fun.
Adding misc trade goods to treasure hauls adds some flavor and spice while not being too difficult. Just grab some appropriate items off of a price list and then remove their value from the treasure horde. If they’re only going to sell for a fraction of list price, only deduct that amount, and you won’t have impacted value at all.

If these first two options sound good to you, and you happen to run a 3rd or 4th edition DnD game, you’ll want to check out the treasure generators (and the many other very helpful programs) at donjon.bin.sh. The 4e generator is still a work in progress, but if it ends up half as good as the 3e generator, it’ll be the best one I’ve seen yet.

Description, Description, Description:
Regardless of what else you do to spice up treasure, nothing is as effective as good descriptions. It’s worth investing time in some description for treasure. Ask yourself questions like “Are there any particular sensory traits linked to this treasure? Does it have a smell, make a noise? Is there anything unusual or notable about it? Where do the characters find it? Is it in a container, hidden somewhere nearby, or do they scavenge it from the bodies of the dead?” and work the answers into your descriptions. Just a few extra details can make the difference between a well visualized treasure and another laundry list.

Different Currencies:
A lot of games assume that all cities and races in their games use the same currency. For simplicity’s sake, even if you introduce different currencies, the biggest ones will probably be value equivalent, so a gold hawk is equal in value to the neighboring kingdom’s golden swords, but notable exceptions can be exciting. Currencies that are rare, of uncertain value, old, or of notable value can be a fun find in a pile of treasure. To save headaches, you probably don’t want to mix a lot of non-equivalent coins into one horde, or the bookkeeping will give your players an aneurism, but “a pile of mixed coins composed mostly of hawks and swords, with a few heavy sunwheels at the bottom, green with age” is a cool find.

Really Different Currencies:
Also keep in mind, that some races or cultures might not even value the same materials as everyone else. The nearby orc tribes might use the knucklebones of defeated foes as a currency, while the decadent elven society hidden away in the mountains might use dried ingots of crushed flowers that can be milled into a magical drug. These sorts of special alternate currencies carry the same weight as other alternatives but also help outline the cultures of your campaign, and also introduce new concerns. Gold is gold, but how much gold is an orcish knucklebone bead worth, and who do the PCs need to find to exchange the two?

Trade Goods Part Deux:
If you like the ideas of trade goods, but don’t like the annoying bookkeeping aspect of stopping for your players to write down every little piece of trash they find, consider using trade goods as an alternate currency.  By setting a standardized value per weight for trade goods, used equipment, and other common bartering units, treasures of these types can be described as before, but noted by a simple numeric weight. Thus, “Searching the abandoned storeroom, you find a few skins of vinegary wine, some rusty iron goods, and a wheel of cheese that’s still good under a forest of mold.” can be followed up with “All together it’s about 23 pounds of trade goods”. Foes’ equipment can be handled similarly with the same or it’s own set of units.

Count it Later:
Ask yourself if you were in a dungeon corridor with only the feeble light of a torch holding back the ominous gloom that likely conceals more horrors like the one you just franticly fought, would you stop to take stock of exactly how many pieces of gold are in the bloodstained sack you just picked up, or would you stuff it in your backpack and get a move on before whatever you might have attracted with the noise of your fight shows up? Can’t say I blame you. I’d haul ass too, and most likely, so would your character. So why do we as players insist on a painstaking and careful accounting down to the last penny each time our characters find something? Instead, try telling the players they found “a bag of coins” or “a heavy sack full of mostly silver coins”. If they want to sit and play accountant, verify that’s really what they want to do, then let them do it. And while they’re busy counting, make a wandering monster check. Don’t be shy about it, or lie if the players ask. Any idiot would know that stopping to count loot mid-run is asking for trouble. After getting jumped while they’re trying to do double entry bookkeeping a few times, they’re likely to do the sensible thing, and just wait till the run is over to count everything, meaning you can save all the treasure information for a single listing at the end of the session.

10 Responses to Seven ways to Spice up Your Treasure