Review: The Bones & Things We Think About Games

This review has been a long time in the coming. I’ve had both of these books on my shelf for a while* and I’ve been sitting on doing the review for no real particular reason. Neither of these books were comp copies and this review is unsolicited. These are just two products that I’ve had for a while and wanted to review.

Ok, lets talk about the books, and to talk about those we have to talk about GameplayWright Press. Back when I was first invited to write for Gnome Stew, I’d been trawling the blog scene as a silent reader for a while. One of the blogs that really impressed me was GamePlayWright. Written by two established industry veterans, Will Hindmarch and Jeff Tidball, the blog is an in-depth look at many of the meta issues surrounding gaming. It’s deep, sometimes full of big words, always well researched, and right up my alley. When they came out with a book called Things We Think About Games, I knew I’d be picking it up. When they came out with another book called The Bones: Us And Our Dice, I knew I had to get that one as well. If you are at all interested in the thoughts and reasons behind our gaming practices, these books are something you NEED to own.

*Well, kind of. They actually ride around in my messenger bag almost perpetually. They are two of my goto books for gaming advice. This is because of their nature as quick reads and because of the quality of the advice that comes from many different authors.

Things We Think About Games 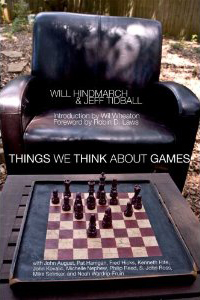 Things We Think About Games (ISBN: 978-0-9818840-0-4) is a book of compact thoughts on gaming. Collecting more than 140 thoughts on gaming, Things We Think About Games is like the Tao Te Ching of gaming thought. Each piece of gaming thought in the first section of the book takes up, at most, 3/4 of a page. The majority of the thoughts are short and concise, revealing some interesting idea about gaming thought or history. Some of the passages have you saying “Why didn’t I ever think of that, it’s so obvious.”, some have you completely disagreeing, and some have you rolling them around inside your head engaging them in an internal dialogue. Talking about these is incredibly useless though, in order to understand what they are like you have to see a few:

In a tabletop roleplaying game, the characters are all wearing pants.

This is true even though none of the players informed the gamemaster that their characters were putting their pants on.

Issues such as these – things that any person would do without comment – are collectively “pants issues,” and players in any sane game may always assert that they have done such things if it ever becomes important.

Dollar for dollar, a roleplaying game is very nearly the most efficient entertainment you can buy.

or the piece of advice I wish all of my boardgaming friends would listen to, #112:

When explaining the rules, the first thing to do is tell me how to win.

What is my goal? How many points/territories/cards do I need to reach it?

The majority of the book is dedicated to small and intriguing tidbits like this. While most are as short as the ones above, many fill the whole page and provide more in-depth analysis of the thought at hand. The last few are lists of related advice from one author, each piece centering around a theme. 7 Lessons Learned From World Of Warcraft, by John August, compiles a smattering of real world lessons that one can learn from the game elements in WOW.

The many small tidbits and larger essays in Things We Think About Games are contributed by many sources. The bulk of the gaming thoughts are by the two listed authors, Will Hindmarch and Jeff Tidball, both of whom have a long list of credits in the gaming industry. There is also a great deal of advice by other authors: John August, Pat Harrigan, Fred Hicks, Kenneth Hite, John Kovalic, Mike Selinker, and so on. The foreword is by Robin D. Laws and the introduction is by Wil Wheaton. This is a book full of big names with lots of great advice. This is a book I constantly go to for advice in all aspects of my gaming life. I find things in here that force me to think about games in new ways, as a game player, game master, and game designer. 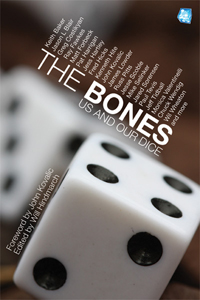 The Bones (ISBN: 978-0-9818840-1-1) is a book of essays, articles, and a comic or two all about gamers and our dice in all their fickle fortune and despair. Each article or essay is written by an established name in the gaming industry. Keith Baker, Matt Forbeck, Jess Hartley, Fred Hicks, Kenneth Hit, Jesse Scoble, Paul Tevis, and Wil Wheaton just to name a few. Packed into the 209 pages of 1d6 articles and 1d20 essays (no joke, that is how the chapter list is laid out) are such gems as:

These are just 15.38% of the articles and essays in this book. Though each essay has a different style, each one is well crafted and in-depth enough to provide some real content. One of my worries when I heard about this book was that it would be like being back in college and reading dry and high brow papers about gaming. Definitely not the case. Each article and essay tackles their particular subset of gaming in such a way that they are interesting to read, even when they get into the deep stuff. The wide variety of articles that examine vastly different subjects keeps the book an interesting read that doesn’t repeat itself. When there is overlap in the subjects of the articles, as often happens with books like this, there is enough variance in how each author tackles it to keep them unique and enjoyable. Bones is definitely a must have for any gamer who has ever felt the anticipation as a die is rolling on the table, turned all their dice to the highest number available in order to court lady luck, or has ever held one of the “bones” in their hands.

I would suggest either of these books to any game master or player. They differ from other game mastering advice books in the fact that they sparks of inspiration and talk about the gaming experience as often as they talk about how to be better at it. I can’t really say anything more about the books, except  this: check them out for yourself:

2 Responses to Review: The Bones & Things We Think About Games