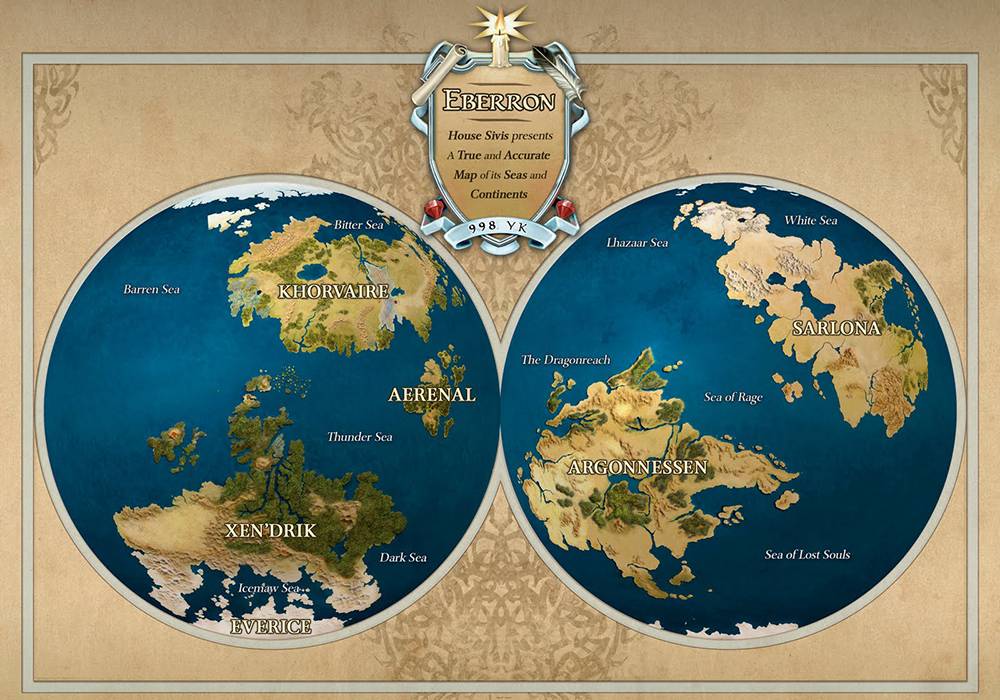 Yeah, every corner of that map. What was I thinking?

By popular demand, my gaming group has requested we start playing my Eberron campaign again. A while back, I talked about how to suspend a campaign, but what do you do if you didn’t end at a nice, neat point? How do you resurrect a campaign your players love, but you aren’t sure you remember where you parked?

I started our Eberron campaign way back in 2011 when I wanted to try my hand at a ‘traditional’ fantasy, fully prepped campaign. Since we were in between D&D editions (sorta) we decided to use Pathfinder. I think I successfully achieved most of the goals I had for the campaign – guide the players into connecting their characters to the setting, the background, and each other, give it an epic scope and feel, bring the steam-punky goodness of Eberron to life, and get the players invested in the game. What I didn’t succeed at was creating a campaign we could complete in any reasonable amount of time. I basically dug myself a hole by giving them six (one for each character) prophesied quests that were designed to take them to every corner of the map. What was I thinking!?

Well, I know what I was thinking. I wanted epic, and I wanted an excuse to explore the many mysteries of Eberron, a setting I adore. When we had last played, they had only completed two of the six quests, but had begun traveling towards a third. The two they completed were quite successful and made for nice chapters in the game’s story, but the motions towards the third one hit some bumps in the road that suspended the campaign in a less than satisfying way.

That was over a year and a half ago. That length of time is embarrassing since I had every intention of picking the campaign back up, but the reasons it was suspended (we lost a player, I was unsatisfied with the last couple sessions, wasn’t feeling it, etc.) left me unsure how to get the game back on track. As a result, I never pushed the issue and let us be distracted by other games. After all, there are always new games to be played. Now they want it back and I have promised to bring it back to life.

Here’s what I’m doing to achieve that: 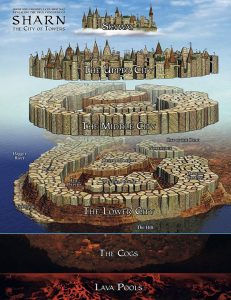 I should have just set it in Sharn.

Review the notes I do have. Towards the end, due to frustration and a little burn out, my notes are less than stellar. I have a vague recollection of where they were and what was going on, but notes don’t really give me much to go off of. Luckily, the earlier parts of the campaign have much better notes. I was more diligent and I have reviewed those to get a feel for where things were left off and what will need to be done to carry forward. I’ve also been trying to fill in some gaps with the notes I didn’t take. While they’ll be incomplete, the information I write down will help in the future since I highly doubt we’ll complete the four remaining quests before I want or need a break at GMing.

Start planning what’s to come. While I am very much an advocate of minimal prep, I still need to have an understanding of where the characters are headed and what they could run into. Pathfinder and D&D aren’t exactly games that I can run with just a piece of paper and my imagination. I’ve already decide that I’m going to skip past where we awkwardly left the game and will start at them arriving at Stormhome to book passage to Icewhite Island. There is some character background stuff related to Stormhome, so I’ll need to double check character backgrounds to make sure I have their hooks all properly seeded in the region. I can also start roughing out their destination. Maybe where they were is a little murky, but I can clear things up with where they’re headed.

Make sure the players have all the pertinent details. While I know they love the campaign, I also know some of my players have memories comparable to goldfish. I want to make sure we’re all on the same page about who their characters are and what their place was in this world. This will include reminding them of important NPCs and milestones of things they’ve accomplished. I’ll also check in and make sure they’re still okay with who and what their characters are. For example, the Gunslinger was accidentally turned into a Dragonborn during one of the last adventures. Is the player okay with this, or does he want to hand wave getting turned back into a human? Our newest player has volunteered to take on the abandoned character, so I’ll be working with her to make sure she’s okay with the character’s build and adjusting or tweaking her personality and background to meld what’s come before with someone she’s going to want to play.

As frustrated as I was with the way things ended, I’m looking forward to seeing these characters again. There’s a lot of history and personality in what’s come before and the players deserve a chance to see a real ending for the campaign. Have you ever worked to revive a campaign you left in an awkward place?

4 Responses to Resurrecting a Campaign