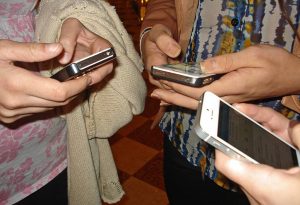 Trying to coordinate for GenCon 2006 is why I got a cell phone in the first place.

Ask GMs about their pet peeves when it comes to player behavior and one of the first subjects to come up will be the dreaded smartphone. The modern cell phone, whether you’re an i-devotee or an android enthusiast, is a modern marvel of technology. In your hand you hold something that was science fiction just twenty years ago, but it’s also a tiny device full of huge, shiny distraction.

It’s bad enough when you’re having a conversation with someone only to realize they’re paying more attention to their phone than they are to you. News articles and editorials bemoan and exaggerate the loss of the millennial generation as they become disconnected to the world around them while plugged into something intangible within their phone. There’s no denying the smartphone (and by extension tablets) hasÂ altered the social landscape in many ways, and I am sure there are some ways we won’t even truly recognize or understand until we’re a decade down the line.

On top of all of the mundane concerns, now add the amount of work and time a GM puts into prepping and running a game, and it’s no wonder the smartphone ranks so high as an annoyance at the game table. But is the phone the problem or just a symptom of a differentÂ issue?

Despite these legitimate concerns and frustrations, I think smartphones get a bad rap. There are plenty of valid reasons to have a smartphone or a tablet at the table. Tablets can provide you with your gaming library in PDFs at your fingertips, while there are phone friendly apps that also provide gaming tools. Don’t underestimate the research capabilities either. There’s nothing like being able to quickly look up the words to a Lewis Carroll poem when trying to play a slightly creepy child, or being able to find the lyrics to the song your demon hunting metal band is covering to try and destroy a Prince of Hell. Finding a quick reference picture for your character or whatever else you’re trying to describe can also be invaluable.

If some of your players’ attention has turned from the game to their phone, rather than immediately taking affront, take a step back and determine whether they’re being rude or if you lost their engagement. Even if it’s a little bit of both, there are ways to draw them back in. Maybe the initiative order for combat has been taking too long. Perhaps it’s been too long since something interesting happened in game that their character could interact with. If the characters split up, maybe you’ve spent too long with one group and it’s time to pay attention to the other players. As with any distraction, find the way to draw them back in and they’ll put down the phone.

The biggest problem with the smartphone isn’t so much the distraction it provides as how engrossing that distraction is. When bored players doodled in the margins or played with their dice, it was easier to get their attention back on the game. It can be tempting to try and ban smartphones and tablets from the table altogether, but I caution against that unless you’ve got very specific reasons for doing so and have player buy-in. Otherwise, a frustrated and tyrannical edict may alienate some of your players. I know I’m less inclined to be generous to GMs that try and boss the table around.

What have your experiences been with smartphones and tablets at the game table? Complete distraction, useful tool, or somewhere in between? I’d be curious to hear how other GMsÂ have resolved smartphone problemsÂ thatÂ popped up at their game table.

20 Responses to Regarding the Smartphone