As a GM, you should already be a raging kleptomaniac. The best thing about these three particular movies is that you can use them almost as-is, with very little prep on your part:

All three share some similarities, but they’re more than different enough to stand apart as distinct scenarios. I’d love to play any of these at a convention, or as one-shots in lieu of a cancelled home game.

Spoilers ahead: Needless to say, I’m going to spoil the hell out of these movies — if you don’t want to know plot details, stop here. 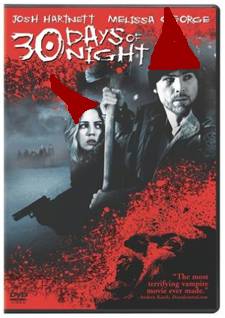 I expected this movie to suck, but it’s actually surprisingly good — and throughout the whole thing, I found myself thinking, “This would make a perfect convention scenario.”

Plot summary: Based on the comic of the same name (which I don’t like, despite the gorgeous artwork), the premise is simple but sexy: vampires descend on the small town Barrow, Alaska just as the sun sets for the last time in 30 days — the town gets a month of night once a year, making it a perfect environment for vampires.

The vampires don’t come every year (that would be too obvious); this is a special occasion for them — and they know what they’re doing. They steal and destroy every cell phone they can find, shut down the broadcasting station, stop anyone who tries to leave — then declare open season on Barrow’s populace.

The main characters are a couple on the outs — one of whom is Barrow’s sheriff — supported by a cast of horror staples: the cranky old guy, the younger brother, the determined loner, etc. Nothing new, but perfectly suited to this kind of movie.

Most of the townsfolk die in the first few days, but the ragtag band of protagonists goes to ground in a boarded-up house and tries to wait them out (as they know the vampires will have to leave after 30 days, because the sun will come up again).

They get picked off one by one as circumstances spiral out of control, and of course plans are hatched, vampires are fought, and there’s a final showdown.

Why it’s perfect: Five things make 30 Days of Night a great template for a horror scenario:

Watch it once, take some notes on the characters and locations, and you should be off and running. What makes it cool isn’t a complex plot, it’s the setup and the sandbox full of options you make available to your players. 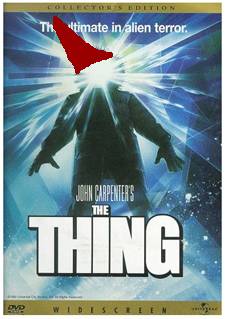 The John Carpenter version of The Thing is one of my favorite movies. Kurt Russell is perfect for his role, the old-school, pre-CG special effects are fabulous, and it delivers some great horror moments.

Plot summary: A shapeshifting alien makes its way to an isolated Antarctic research station, where it preys on the scientists who are trapped there, picking them off one at a time. Whenever it kills someone, it takes on their appearance.

It arrives in the body of a dog, brought by a Norwegian team that discovered the thing’s UFO out on the ice. The scientists take in the “dog,” and it feeds off their dog pack, gaining strength and working its way up to the humans.

No one knows what’s going on right away, of course. Once they figure it out — and discover that the thing is masquerading as one of them — the tension ratchets way up.

A test is devised to find out which of them is actually the monster, and they all reluctantly submit to it. When it’s the thing’s turn, it goes batshit; from there, the movie is all-out war between the scientists and the thing — which has now infected several of them.

In the end, they realize that the only way to keep the thing from escaping and infecting people all over the world is to kill everyone at the station — including themselves.

Why it’s perfect: The Thing would make one dark, dirty, unforgiving horror one-shot:

I wouldn’t force the movie ending on your group. They might decide to do something totally different, or favor their own survival over the fate of the world — and since it’s a one-shot, as long as it’s fun it doesn’t matter how things shake out. 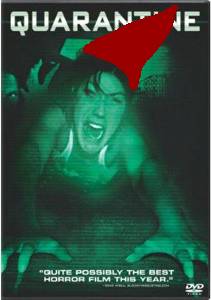 Quarantine is a remake of the Spanish horror film REC (which I haven’t seen), shot handheld from the perspective of one of the characters. It sounded like fun, so Alysia and I grabbed it on Netflix — and holy shit was it good. It’s easily one of the creepiest horror movies I’ve seen in years.

Plot summary: A TV show host and her cameraman are filming local firemen for a story when the squad gets called out in the middle of the night to respond to a 911 call at an apartment building.

The cops are already on the scene, and screams are coming from one apartment. They follow the cops and firemen inside, and in one corner of the kitchen is a woman covered in blood who looks like a zombie. Naturally, she attacks and bites one of the cops — and from there, everything goes to shit.

The source of the problem is an infection that makes those who get bitten become feral and violent, though this takes the cast a little while to figure out. When they try to escape, they find that the CDC has sealed off the entire building, and soldiers are posted at every possible exit. No one knows what’s going on.

You’ll recognize the character roles: mother and child, cops, firemen, the opportunist, thd old people, the calm and collected guy who dies early on — horror staples across the board.

One by one, the building’s residents get bitten; the infection spreads, and people get shot, beaten to death, pushed down the stairs, and hacked up — until the only people left are the TV host and the cameraman. The power is out, and they’re stuck in the penthouse apartment with patient zero.

They don’t make it out, which was the CDC’s plan all along — why risk letting the infection spread?

Why it’s perfect: Like 30 Days of Night, I watched this and couldn’t help but imagine playing it — it’s essentially already a horror adventure:

If you wanted to depart from the movie in a big way, you could leave the characters an out — maybe the CDC is just waiting for a specific science team to arrive, for example, or maybe the characters have a shot at breaking the cordon. Again, it’s a one-shot: even if there’s no hope, getting there is all the fun.

There are loads of other movies (and TV shows) that can be used as-is to create one-shot horror scenarios. I picked these three because I like them, I’d love to play them, and they illustrate some of the best and most basic elements you can mix to create this kind of scenario.

What are some other good candidates? Have you ever played a horror adventure based directly on a movie? How did it go?