I didn’t come up with this, but it’s become a truism in my current gaming group — one worth articulating here: When it comes to choosing a game or campaign, player buy-in trumps GM interest.

What do I mean by that? Let’s talk about a few terms, then pull them all together into a useful rule of thumb (bearing in mind that these are all defined in the context of choosing your next game or campaign):

Or, in shiny chart form… 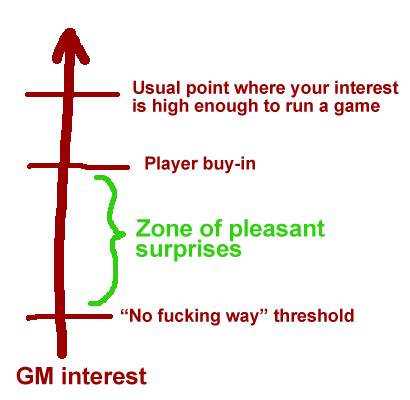 As you can see, making charts isn’t my strong suit — it makes perfect sense in my head, and I hope it makes sense here, too. Here’s the written version:

If your players are seriously excited about a game that you’re not — at least initially — that interested in, but your personal level of interest is above the “no fucking way” threshold, then player buy-in trumps GM interest and you should try running that game (because it falls in the zone of pleasant surprises). You’re likely to be pleasantly surprised by how much fun it turns out to be.

In other words, whether or not you’re personally interested in a game matters a lot less than whether or not all of your players are interested in it. If they’re interested, they’ll be motivated to create awesome characters, and will work together to make the game more fun for everyone at the table — yourself included. And you’ll find that you feed off of their interest, and get excited about the game as a result.

I don’t know how well I’ve articulated it here, but this rule serves my group well. It’s one I think most of the GMs in my group would agree on, and we seem to have arrived at this conclusion collectively. It’s also the basic principle that led me to run Mage: The Awakening for the past year, so I know it works.

Mage wasn’t on my radar at all, though I liked the previous edition as a player, but when I saw how interested my players were in it, I got interested in it as well. And it turned out really well, resulting in one of the best games I’ve ever run.

Give it a shot sometime — it might work just as well for you.