Out of the Abyss: A Surprisingly Difficult take on the Underdark for Organized Play

The third D&D encounter season features Out of the Abyss, the newest hardback adventure for D&D. The first three seasons of D&D Encounters took a published product–in this case Out of the Abyss–and separated the first few chapters to run as an introductory adventure. It turns out that this adventure breaks new GMs… largely because the beginning subverts so many D&D tropes.

Fair warning: spoilers for the first session abound in this post.

D&D Encounters is set up as an always low level, easy to join and try out D&D game. In both 4th and 5th edition, the adventures run on Wednesdays, with short sessions of about two hours the norm. It’s a casual after work campaign at the game store, explicitly run on a drop in basis.

Because new players are so common, it’s good to have some pregenerated characters available to pick from. Some characters were released for the whole Rage of Demons season. Unfortunately, this season the characters are better fitted for the weekend Expedition play–they’re from the Hillsfar region and fit its plots. 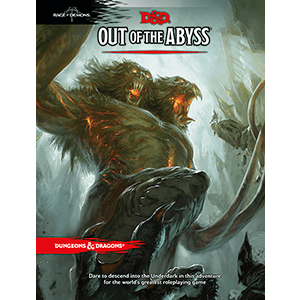 We start where? With what equipment?

The characters begin imprisoned by the drow. They’re manacled and shackled, stripped down to underclothes. For experienced players, this provides an exciting additional challenge. You’re not a normal first level character who can take on goblins and orcs in a fair fight, you’re a first level character without equipment or freedom. It will make for impressive stories… but it’s a different story than traditional D&D. That difference from settled expectations can make it great for a home group, but it’s a challenge for organized play.

One of the frustrations is that the character sheets are all “wrong”, since they’re built around the PCs with their equipment. So you need to be ready to work through the math for the brand new players the program is designed to support. It’s a lot to juggle on both sides of the screen… even before you start playing the world around the PCs. 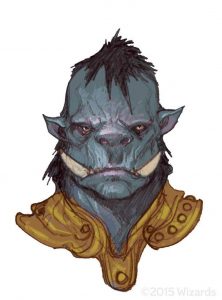 The PCs don’t start out in the cell alone. Along with the PCs are another 10 prisoners, who each have a quirky backstory. None of their fellow prisoners are human. Two can be quickly described–there’s a dwarf and an orc. Beyond that, there are elves and gnomes–but they’re the deep variants, Drow and Svirfneblin, so standard images and personalities don’t work.
Then there are even stranger ones; I held up pictures of the creatures from the Monster Manual to show how alien they look.

How alien they sound is another issue. While the NPCs have interesting backstories, only the dwarf and orc speak common, and the orc’s isn’t the best. If you have a PC who speaks Undercommon, they’re at the center of the story, since they can actually talk to most of the critters. For a group without a character who speaks Undercommon, you’re down to gestures.

The PCs are supposed to be exposed to their captors, which include four named and detailed Drow, and an assortment of guards and soldiers. If the PCs investigate, they can learn about the rivalries and divisions among their captors… but in the three tables I’ve played at and run, the players haven’t learned much about their captors before breaking out. That’s a shame, since their captors are recurring villains. Once the PCs are running, it’s hard to show the players who their captors are–if they’re close enough to talk, flight has failed!

Be Explicit: Head off miscommunication by being upfront about the story in your pitch. Let the players know that this is an unusual season of adventure; rather than brave deeds by polished heroes, this adventure is survival heroism. Let them know that the start of the season is like a prison escape movie: it’s about the accumulation of small advantages, learning the timing of the guards, palming cutlery, etc.

Start Small: If you can, tap extra GMs for the this Encounters season. The heavy roleplay of the early season works best when the PCs interact with their fellow prisoners and captors. They’re less likely to interact if they feel like a complete team–they’ll spend their time interacting with each other and plotting their strategy, rather than looking for allies and for captor’s weaknesses to exploit. Similarly, waiting on other players’ dialogue and for your turn when parallel scenes are being run is worse the more players you have to wait on.

The other part of Start Small is to break up the PCs when they’re out of the cell on work details. Be sure to mix them with NPCs, which can make interaction with even the strangest NPC feel more natural, because they’re working together to solve tasks. You might do well to keep the PCs on opposite shifts (half working, half in the cell). Once the PCs are all outside the cell, it’s easy for one player’s impulse to get everyone fighting the guards or running away early.

Take it Home Of the three Encounters seasons to date, this module is the furthest from straightforward heroic play. While it can run as public play, it’s not the best introduction to D&D–because it’s so unlike most D&D. At home, though, the adventure can really shine. I still advise that you pitch the adventure to your players as starting off with a prison break–you might even skip equipping characters altogether, just working out improvised weapon and punch attacks.

Out of the Internet Abyss…

Are any of you running or playing Out of the Abyss, at home or at a store? How did it go for you? Did great characters come out of that start? Which NPCs did your players enjoy interacting with, and which ones did they ignore (or worse)? Did you find or create any good resources for the season–if so, please link to them!

At our store, a few tables made it through the Encounters material and are continuing into the rest of the hardback book. We restarted the season in January with extra GMs to catch new players and offer a new “jump on board and experience the whole season” point. Though this time, the other GMs are running Hoard of the Dragon Queen and Princes of the Apocalypse… which makes sense, given how straight forward they play in comparison.

A helpful tool for the early story are Third Games’ Out of the Abyss Jailbreak NPCs pdf. It’s great to be able to share pictures and descriptions of the other prisoners, and it has stats for when they get into trouble.

18 Responses to Out of the Abyss: A Surprisingly Difficult take on the Underdark for Organized Play