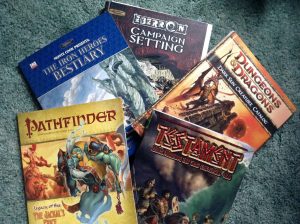 Need a monster to slay your party with in 2016?

Try one of these five creatures, gleaned from sourcebooks in my gaming library.  These monsters are a whole different category of menace. They not only want to devour your crew of 10-foot pole-carrying adventurers, they have the means to be the predator in this ecology. Confronted with these terrors, PCs might think they are ready to fight, but they should always be prepared to flee. So, make sure your table’s PCs have their running shoes on when they encounter them.

Weebles wobble, but they don’t fall down. Don’t let those four stubby legs and its big bloated oval body fool you. It may look like a beach ball with arms, but tophets are 10-feet tall and weigh 3,000 pounds. Those massive arms and huge maw are sufficient to snag an adventurer and swallow it whole, depositing in its locked gullet. Yes, that’s right, this metal construct’s belly is covered by an elaborate lock, meaning unless you are good at picking locks, you’re going to be spending a lot of time in there. Or not. The “iron glutton” might decide to wander outside. Then the desert sun turns the thing’s metal body into a furnace and cooks those within. What a way to go (provided the PC prisoner doesn’t suffocate first).

The ancient Canaanites envisioned some pretty weird monsters, which this setting sourcebook provides aplenty. But considering that one of the plagues that afflicted Egypt was a great swarm of locusts, I guess it’s not surprising their fears become manifest when an eight-foot long grasshopper shows up. The akilem is the instrument of a vengeful god, Reshep, whose domain is pestilence. The akilem turns black with a burning red tint when roused, blighting farmland wherever it lands, accompanied by a swarm of grasshoppers. Its favorite attack is to leap out of the sky onto a hapless adventurer, knocking them prone and dealing bludgeoning damage. The creature is wrapped in a sheath of flame, which also smarts. So it hops up and down on its victim until it is turned into a pasty, crispy mess which the giant black flies called Zebub Spawn (page 139) can devour. Circle of life, man.

Imagine a creature with the appetite of a hungry teenager and the chaotic evil outlook of a bad-tempered goblin. Oh, and they have two toothy mouths and four arms — the latter being used to carry additional weapons. Those weapons are used to play whackadoodle on anything that looks appetizing, such as the “travelers or farmers” that the setting guide suggests are at the top of their dining wish list. Of course, the really unsettling thing about dolgrim, so far as the setting is concerned, is the entry “Dolgrim Characters.” That’s right, some adventuring parties think having a dolgrim along as a fellow adventurer is a good idea. I wonder how long that lasts? Maybe one of the players wakes up to the smell of something cooking to find their dolgrim compatriot roasting a spit over the fire. “Where’s Bob, he was supposed to be on watch?” To which the dolgirm replies, “Oh, Bob is good. Tastes like bacon, does Bob.”

Speaking of scrawny little dudes that are all mouth and teeth, look no further than the selvrins. With arms and legs that can serve as either or both, these mobile killing machines carry needles or flails and “attack with a brutal flurry of slashes, cuts and bites that reduce its opponent to a pile of shredded flesh in mere moments.” One selvrin is bad enough. But then the buggers gather for the “Great Feast,” in which they go reaving in midnight hunt style. They set loose captives, sometimes even giving them weapons and armor and a head start. Then the hunt is on, and they run their prey to ground. Nice guys, so that if their blood lust is not sated, they may even turn on the weaker or more cowardly members of their own kind and do the same to them. (Oh, and just like the dolgrim, there is an entry on how to run selvrin characters. PCs wake up and find a selvrin compatriot roasting something on a spit. “Hey, where’s the dolgrim, he was supposed to be on watch?” To which the selvrin hisses in reply, “Dolgrim … tastes like Bob!”)

While it is true that on Athas, the planet that is the setting for Dark Sun, everything tries to eat everything else eventually, the silt horror is especially fearsome. For one thing, in this guide for the fourth edition rules, the monster actually gets two stat blocks. You read that right. The silt horror is such a bad actor it gets two stat blocks, one for its main body — basically a mouth with fangs — and the other for its tentacle. That tentacle is something else. Imagine picking up an M&M and popping it into your mouth. That’s what the tentacle does to adventurers. I bet it can snag and chomp selvrin like candy. (Yum, tastes like chocolate!) Oh, and there’s none of this nonsense about silt horrors joining the party. But the tentacles do regenerate.