My Initial Impression Of The Reaper Bones Payoff 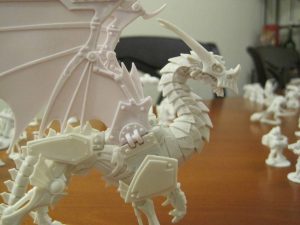 Well, this wasn’t the article I had scheduled for today, but when I got home last night there was a nice big box sitting on my doorstep full of plastic miniature goodness. Many of you are probably in the same situation, enjoying the rewards of backing the Reaper Bones Kickstarter.Â  Some of you are not. To those who haven’t yet gotten their bones package, or who didn’t get in on it, I thought I’d share my first impressions and give you gratuitous photobombs of the miniatures.

Lots Of Minis – Holy #$%^& that’s a lot of miniatures. I got the basic Vampire pack, the Deep Dwellers add-on, The Orcapocalypse add-on, and the Undead Giant and Clockwork Dragon. The miniatures covered my table quite easily. While I had space and set them up in various scenes for my photos, there was a lot of congestion.

Very Detailed – I was impressed by the detail on the miniatures, even the small ones. The molding process was done really well and the miniatures all look great. 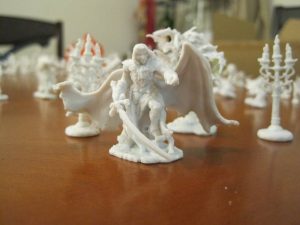 Variety And Uniqueness – One of the things that made me drop my money on the Bones kickstarter was the variety and uniqueness of the miniatures. There were a great deal of different types of characters and enemies in the basic vampire pack. Nothing here felt very stereotypical either. The orcs in my Orcpocalyse set are all interesting sculpts with lots of personality.

Genre – The miniatures skew towards fantasy games, but there are plenty of modern miniatures and futuristic ones. There are steampunk stylings to some of them, but not a great deal of them are steampunky. 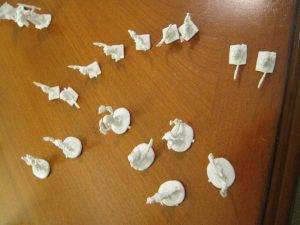 Enemies Galore – There are a slew of minis here that can be used for enemies, and I like that. My players will usually provide or find their own PC minis, or finding them myself is pretty easy. Finding enough miniatures for enemies is another matter. D&D’s random packs never produced enough for me to really populate a battlefield with enough of the type of creature I wanted to put in there.

Ghosts and Elementals – There are green spectres and red fire elementals in my group of minis. These are very unique and have a little less definition because of their color. It wouldn’t do to paint these, or at least not to cover them. I can see adding some definition or leaving some of the colored plastic visible for effect. 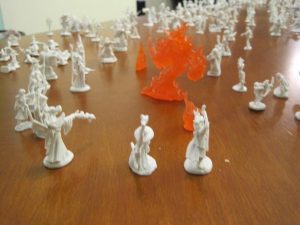 Stability – These were sitting in a box in Mississippi for probably half a day, so the plastic got very hot. Some of the bigger miniatures don’t stay standing as easily (the Owlbear in particular comes to mind), but that problem could be easily resolved by placing those miniatures on bases or adding weight to the bottom.

Gender – My one complaint with the miniatures is one that isn’t really Reaper’s fault, it is more the industry’s fault. Many, not all, of the female miniatures are rather chainmail-bikini-esque. Some have overemphasized breasts in order declare their femininity and distinguish themselves, but some aren’t wearing a lot over those. I don’t particularly like that attitude in gaming and I’ve been very happy to see it take a backburner in the recent years of the hobby. I was a little disappointed to see so many unnecessarily buxom models in the set. Of course a lot of this will be changed when the miniatures get painted, but I would have liked a bit more dignity for the female minis out of the box.

Here is a gallery of images for you to see most of the minis, but before you get caught up in the images, I’d love to know if you’ve got your Reaper set and what your first impressions are?Â  If you aren’t reveling in a plethora of plastic pretties from Reaper right now, where are you getting your minis fix? Or, are you the sort of gamer who doesn’t really use miniatures? Drop a line in the comments, we’d love to hear all your thoughts on miniatures.

Click on the pictures to see full sized versions.

A wide shot of the minis covering the table (with leaf in).

Rats and spiders in comparison to regular sized minis.

The coatl mini reminds me of the goat that comes on bottles of Ayinger Celebrator.

The small creatures are still detailed.

The female giant is quite interested in the gunslinger.

Some of the buxom, chainmail-bikini-esque females.

Some of the buxom, chanimail-bikini-esque females.

A group of mages surrounding the fire elemental.

Two warriors against a horde of redcap type creatures.

A griffin takes down an owlbear, which had troubles standing on its own.

Two of the orcs.

Most (not all) of the orcs surrounding the owlbear/griffin fight.

The undead giant in relation to other minis.

Another shot of the undead giant in relation to other minis.

The clocwork dragon vs space marines.

A pokebattle between a beholder and an orc.

Far off shot of the space ape.

Close up shot of the space ape.

The wings show through a little pinkish.

25 Responses to My Initial Impression Of The Reaper Bones Payoff