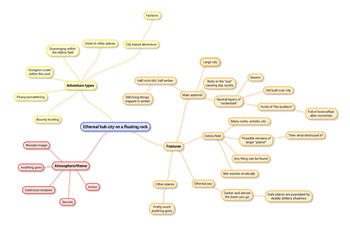 Mind Mapping is an information organizing technique, also called web mapping, concept mapping, spider mapping, or spray mapping. It involves building a fairly free-form web of related concepts with pathways between them. Useful for almost any aspects of GMing, it can be applied to brainstorming ideas, planning campaigns, settings, adventures, characters, locations, and pretty much anything else.

The execution is simple. Write down the big idea in the center of a blank sheet of paper, then write down a smaller related idea nearby and draw a line between the two. Repeat. Repeat. Repeat. Outside the big idea will be a ring of categories or topics. If you’re making a country, the next tier might be things like economy, government, ecology, etc… Anything you might have an idea about is fair game. From those spring more specific details. Ecology might have a link to various sub locations or notes on weather.

Let’s take a look at a campaign I’m working on as an example: I’m imagining a site based campaign with a setting similar to Planescape or Spelljammer. Set in a major hub city in the ethereal plane near common termini for magical and ship based travel. I start with the big idea:

Click on any of these pictures for a better view, btw.

From there I add three major topics I want to think about. Features: what does this big floating rock look like? Adventure Types: What is there to do here? and Atmosphere: What kind of themes and feelings do I want to invoke? 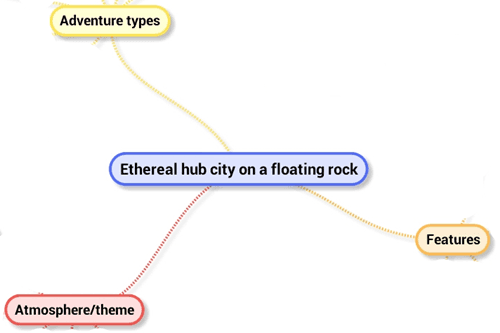 Of course order’s not important. If I had wanted to completely flesh out features before I moved on to adventure types, I could have. Similarly if I decide to add a fourth big topic later, that’s not a problem. But for demonstration’s sake, next I’ll add some stuff to Atmosphere/Theme: 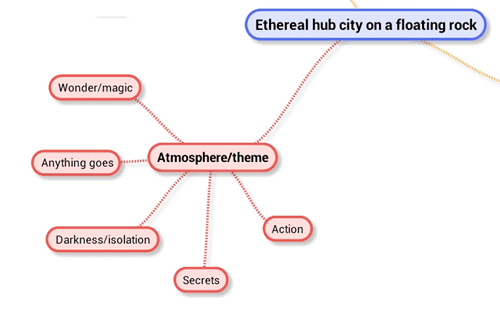 Next is Adventure types, then Features: 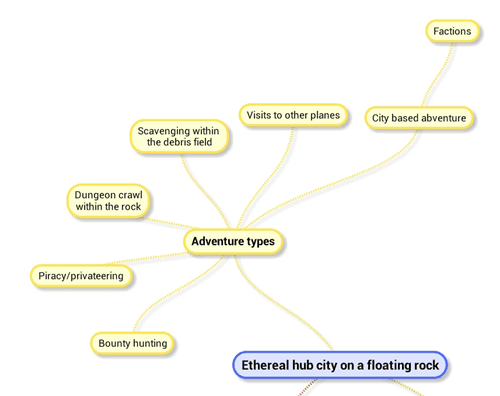 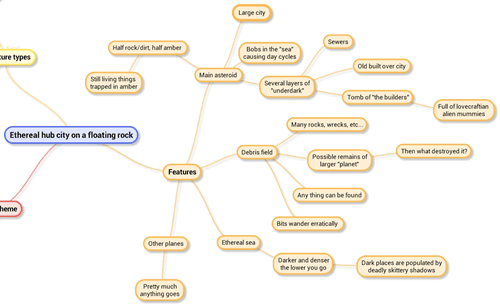 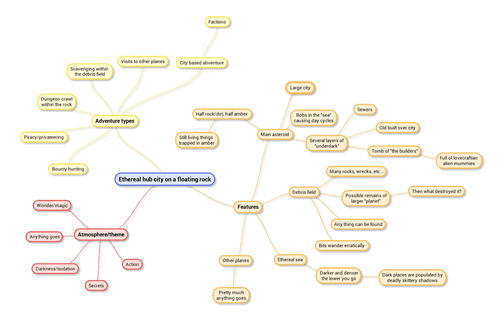 Mind maps offer some advantages over more common organizational and note taking methods. They’re fast and easy to create, they only require you write down essential “bytes” of information, they have a visual organization that’s easy to grasp, they can create visual structures that approximate the relationships contained within, and they make cool pictures!

They can however, take up inordinate amounts of physical space and it’s easy to accidently duplicate information (if you find yourself mentioning the castle in two places just draw a new line between the multiple instances and only use one).

For the mind maps shown above, I used the free android app SimpleMind Free. There are plenty of other tech and luddite options available as well.