It isn’t often that a movie garners a remake/reboot, a five year stint as a television series and is then resurrected–again–as another television series. Plus, I’d wager a fair number of gamers have have thought of the draw of a wrongly-accused killer “repurposed” as a secret, government assassin. I mean, who wouldn’t?

So, clearly, there are some things we can learn from the latest iteration of Le Femme Nikita.

Chances are good that you’re familiar with the CW’s new television series, Nikita, starring Maggie Q. Nikita is based on the 1990 french movie of the same name (Nikita), which was later rebooted in a US movie with Bridget Fonda, Point of No Return. That, in turn, led to Le Femme Nikita, a television series on the USA network (1997-2001) starring Peta Wilson.

All versions are a variation of of the concept of a young, beautiful woman down on her luck (heroine addict/killer/wrong place, wrong time) being forcibly trained as a covert assassin. Then cool stuff happens. There’s a fair amount of duplication in the ABC television series, Alias (2001-2006) as well.

Much of the makeup of Nikita, in particular this latest iteration, is rife with storytelling lessons. As with our other previous examination, Tron: Legacy, spoilers will abound. Be warned!

In the recap outlined earlier, all versions of Nikita share a common theme with subtle variations. What’s refreshing about Nikita–and the other iterations–is that they don’t venture far from the formula. It’s just…cool. The first instinct may be to run away from that but they all draw upon the source material and seek to replicate and then improve upon. So while each bring something familiar to the table, when I tell you “Nikita” you know what I’m talking about, conceptually.

As GM’s we find inspiration in many different ways but feel constrained or perhaps judged by being too true to our source material. If there’s a good story, no matter where it came from, tell it, I say.

You don’t always have to file off the serial numbers.

Beyond Nikita being a general badass and seemingly always one step ahead of the bad guys, she also messes up a fair amount. Not small things either, but missing the occasional trap, getting her butt kicked, and even betrayed from within. It’s refreshing to see Nikita’s occasional mistakes that validate her as human and make her a more identifiable character. Fallible, as are we all.

So shouldn’t our NPCs be equally fallible? It’s alright for the PCs to have a plan that goes off without a hitch or the villain making a key miscalculation, opening up the door for the characters to take advantage. A slip on the part of the femme fatale or the sneering magic wielder that doesn’t place the laser-guided fireball on exactly the right 5’ square are nice changes of pace. 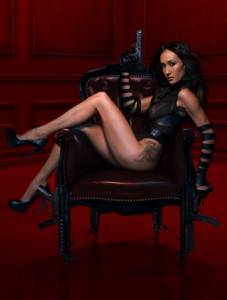 Rare is the show that keeps me guessing until the final credits, but Nikita does an admirable job. There are plots within plots within schemes. It’s all rather clever when it comes together; what you think is happening actually is but there’s another layer (or two) that we’re not aware of until the very end. In particular I like the episode that has an interrogation training exercise go “wrong.”

Layering your plots is a complicated matter–and likely something you won’t want to do on a regular basis. But on occasion is a an equally powerful storytelling tool. The surface victory of the PCs in the end advances the machinations of the villain as well, for example.

The danger is doing this with increasing regularity so that it becomes old hat. Ideally no one should suspect the other layer is there, or understand necessarily what the outcomes are until the final reveal.

One of my pet peeves is storytelling that, at the end of the day, hasn’t done much to move the train along. Most television shows latch upon a successful formula and drive it mercilessly into the ground. Nikita is a breath of fresh air in that regard. In the span of just one season multiple key characters are killed (in increasingly clever ways to maintain the identify of Nikita’s mole), her protÃ©gÃ©e, Alex, betrays her mentor–and is setup as the foil for season two–while the very man tasked with capturing Nikita changes sides.

Season two in no way mimics season one; they are completely different. Instead of taking the proven formula, the story is advanced in new and dramatic ways. In our desktop games that’s easier said than done, however.

This begs the question of when have you gone too far? As long as the essence of the campaign is intact I put forward that nearly anything is fair game. A degree of trust is required here; I’m not advocating doing crazy shit for the sake of doing crazy shit or slaughtering PCs for giggles. But anything that upsets the status quo and takes the campaign a new direction–perhaps even temporarily–meets this criteria. Shake things up a bit.

SimilarÂ to the above, Nikita stories also distinguish themselves in the variety of ways they are told. In one mission Nikita may solve through brute force, the next a mission goes awry and the target changes midstream, and another may require undercover espionage where no one must know she was there. That variety also allows for new, interesting ways to showcase the characters. I’m a big proponent in bringing this storytelling style and adventure design to your table. Put characters in unfamiliar situations and allow the players to stretch themselves. Now don’t ask the fighter to take on the role of the thief for an evening–make sure the characters are still effective in their own way–but certainly strive toÂ occasionallyÂ take them out of their comfort zone. It’s incredibly satisfying on both sides of the screen.

What other shows or media have you drawn upon for a lesson learned in your own games? Tell us!

4 Responses to Learning From… Nikita