In the immortal (undead) words of Doctor Hannah, “Braaaaiiinsss.*”

*The good doctor is actually trying to say that he hopes you will be celebrating International TableTop Day on Saturday, March 30th, one week from today. In addition to your daily recommended dose of brains, getting together with friends and family to enjoy a variety of awesome games is an excellent way to promote good health. 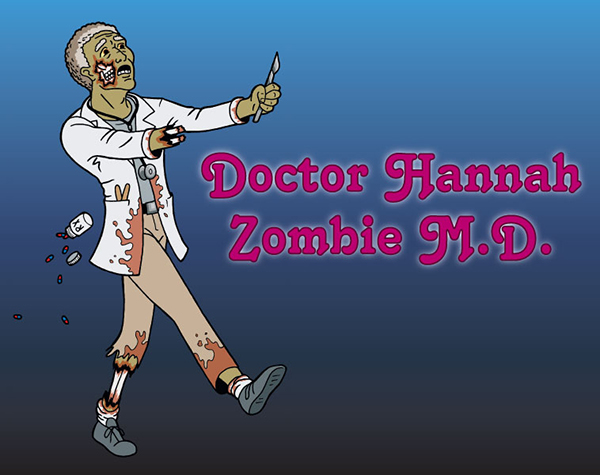 Doctor Hannah by John Erickson. Check out his Deviant Art gallery by clicking on the picture!

Hopefully you already know what TableTop is and have watched a few of the episodes, if not all of them. Just in case you haven’t, here’s a quick explanation: TableTop is a web series on Felicia Day’s YouTube channel, Geek & Sundry, showcasing and celebrating a variety of games. In each episode, Wil Wheaton invites viewers to join him and several friends as they sit down and play a board game (or the occasional RPG). The premise of the game is explained at the beginning of the show along with the basic rules. Throughout the episode, more detailed rules and scoring are explained as the game goes on.

If that doesn’t sound very entertaining, I encourage you to watch a couple of episodes. The show is simple but brilliant in the way it is executed, and it is surprisingly entertaining to watch amusing, witty people play games together. The show has also exploded the sales of most of the games it has featured. For example, the publisher of Tsuro exhausted their stock reserves after they were featured in the third episode. They have had to scramble to get the game back on shelves, and some stores aren’t expected to get new copies until next month (the episode originally appeared almost a year ago). To get a taste of the show, I recommend some of my favorite episodes: Ticket to Ride, Fiasco (parts 1 and 2), Dixit, and Doctor Hannah’s debut, Last Night on Earth.

In celebration of wrapping up a successful first season of TableTop, Geek & Sundry has declared March 30th, the anniversary of the first episode aired, to be International TableTop Day. Beyond just promoting awesome games and the joy of getting together with folks to play them, the website for the celebration is also helping network gamers by listing open gaming events that can be searched by zip code.

The moment I heard about the celebration, I knew I wanted to do something here at RPS to help spread the word. There’s so much more to board games than most people are even aware and it’s always rewarding to expose new people to awesome games. Because of that, I decided to highlight three games that I absolutely adore, but that haven’t been featured on TableTop (yet). 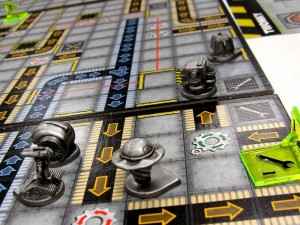 The boards can get really crazy.

Robo Rally puts you in the gears of a little robot racing other robots in what is essentially a game of ‘capture the flag’. The twist is that you have to plan your robot’s moves out five steps in advance and cannot change them once they’re set. This leads to loads of chaos when other robots get in each other’s ways and cause subsequent moves to have unexpected consequences. Not to mention lasers.

The strategy can be a little challenging to pick-up at first, but I have never played a game of it that wasn’t a blast for everyone involved. The boards can be deadly, but there’s enough forgiveness in the way the game handles damage and extra chances that it’s easy to keep everyone involved for most of the game. Even when I keep mixing up my left turns for right turns and getting my little Spin Bot blown up by board elements, I still enjoy the game.

The game was originally invented in the mid 80’s by Richard Garfield who would go on to create Magic: the Gathering. Wizards of the Coast first published the game in 1994, and it is currently available in a 2nd edition format under their Avalon Hill label. 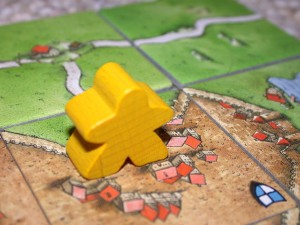 Meeples are your friends.

Everyone who has discovered modern ‘Eurogames’ has a gateway game of initial exposure. For me, that game is Carcassonne. It’s the game that showed me that there was more to board games than what I had been taught growing up with Monopoly. The general rules of the game are fairly straightforward, but the strategy behind how you play can be as simple or as complex as you want it to be, making it a perfect game to introduce to new gamers.

The ultimate goal is to end the game with the most points, but you earn those points by building a medieval landscape of castles, roads, farmland, and the occasional cloister. Each turn, a player draws a tile and places it on the board. Where they place the tile must line up with every other tile it is touching, which can get tricky as the game goes on. Under the right conditions, a player may add a follower of their color on the tile they are placing, allowing them to work towards claiming points for that feature when it is completed. In some ways, it’s like turning puzzles into an addicting, competitive game.

Originally published in Germany in 2000, the game was originally licensed in the US by Rio Grande Games. Just this past year, the licensing changed hands and is now owned by Z-man Games.  There are literally dozens of expansions available for the game; some are more enjoyable than others, but the one thing they always do right is provide new tiles for the game.

So simple, yet so complex.

How good is your poker face and how well can you read people? Both skills are incredibly useful when playing The Resistance, a game where you and some friends fight a battle of intrigue between members of a secret resistance organization and the covert spies trying to bring them down.  A fairly simple and straightforward card game, The Resistance can get incredibly complex as you try to either root out the spies in your midst or sabotage everyone else’s efforts to bring down a totalitarian regime.

At the beginning of the game, everyone draws a card that tells them which side they are on. Depending on how many players there are, there may be one or more spies in their midst. The goal of the blue players (the resistance) is to successfully complete missions, while the goal of the red players (the spies) is to stop those missions from being successful. You have five turns to complete at least three successful missions, or if you’re the spies, ensure three unsuccessful missions. The first phase of the game has the designated leader choosing a team to go on the mission and then a secret vote to see whether or not the mission is approved by the group. Once a mission is approved, the second phase of the game allows the members of the mission to secretly vote on its success. Much of the fun in the game comes from debating and discussing who is a spy and who isn’t. In addition, the design of the game keeps everyone involved throughout the whole game, rather than progressively eliminating players like some similar games.

Initially published in 2010 by Indie Board and Cards, the game is currently available in a 2nd edition with slightly better production quality and clarified rules.

There you have it, three of my favorite games. I will probably be swinging down to one of my local game shops next Saturday to get in some celebratory gaming, and I hope you do the same. In the meantime, let’s hear what some of your favorite games are!