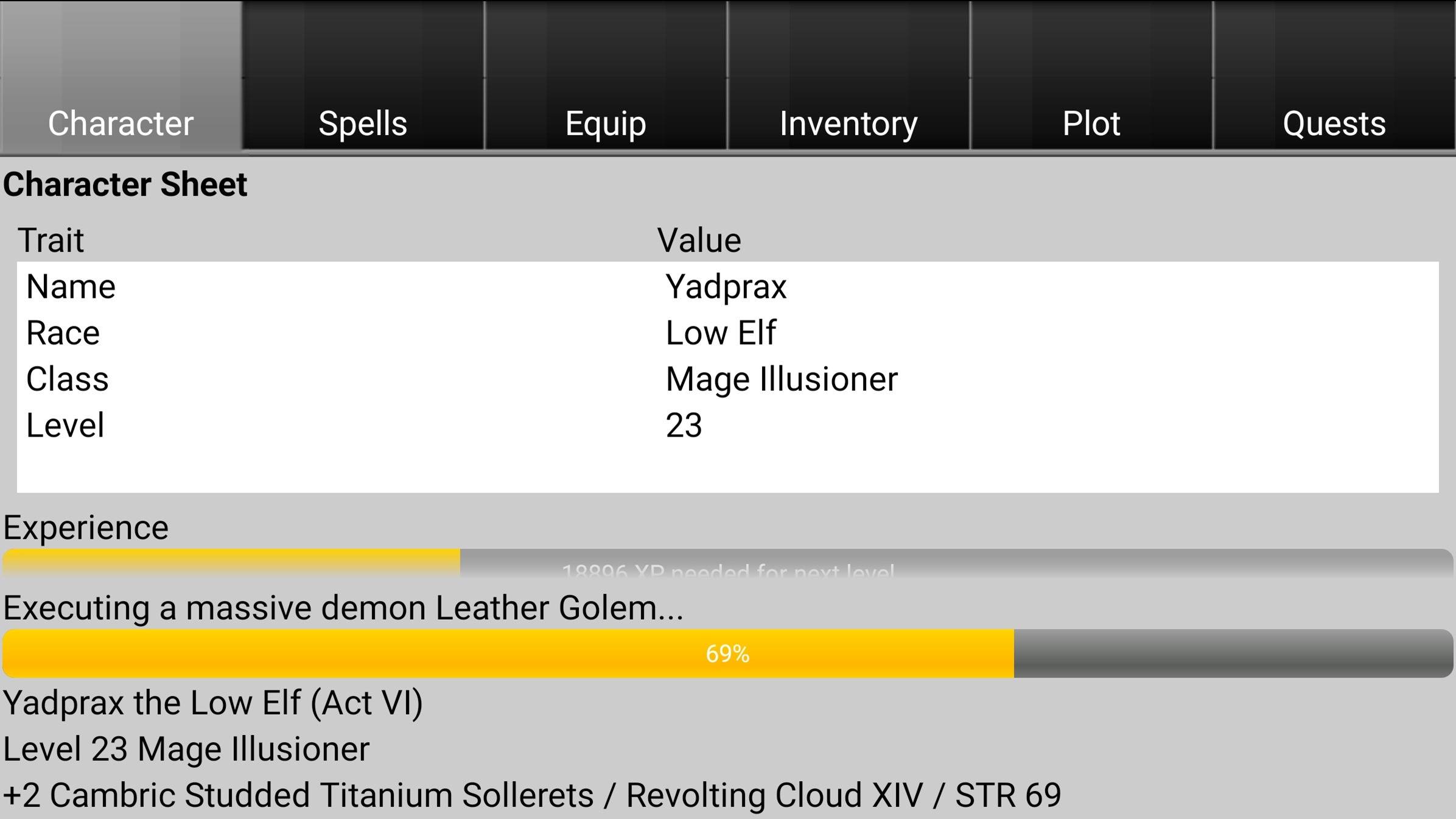 I love me a good Idle RPG. For those of you not in the know, Idle games are games that more or less play themselves with minimal intervention from the player. Progress Quest, pictured above, is a silly fantasy RPG that, once you have made your character, plays more like an operating system installation than a game. All you do is check in every so often and see all the progress your character has made without you. Another of my favorites, Logging Quest 2 allows you to form a party, equip them, tweak their battle strategies, and send them off on adventures. The adventures however are completely out of your control. They just do their own thing without any input from you, record everything in a log (hence the name) and come back successful or not. Both of these games are available in the Google Play store for free, in case that sounds appealing. Progress quest can be found online for PCs. Presumably they, or other similar offerings are available on other platforms, but that’s beside the point of this article. 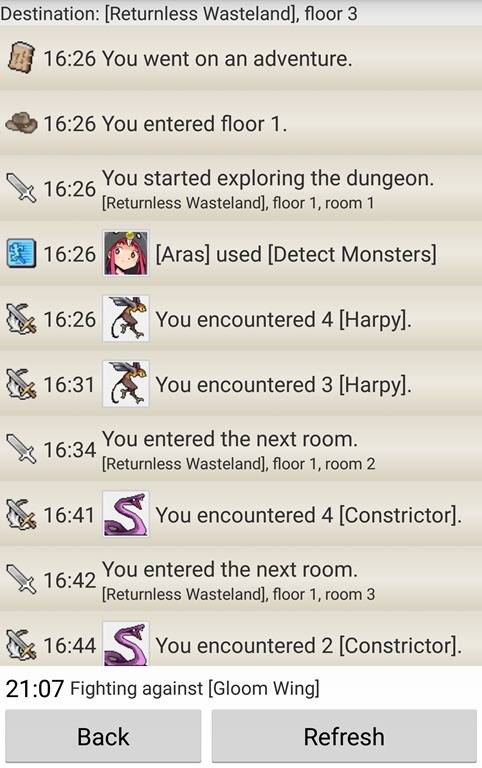 So I hear some of you saying in my head “Why the hell would I want a game that plays itself for me?” I can hear it both because I know not all of you are bent in quite the same way I am and because I’ve heard it in real life every single time I’ve said to someone “Check out my awesome Progress Quest character!”* The appeal is twofold. First they make great games to “play” when you’re supposed to be doing something productive. Kicking one off and checking on it periodically scratches the itch for play and goofing off but takes little to no actual time when you should be… let’s say writing an article for Gnome Stew. Second, despite having put little to no actual work into the results, checking in and seeing that progress has been made actually fires off the whole brain chemistry mechanism for accomplishment so they’re a good bang for your buck free time wise. Go figure.

So how can we bring this idle style play into our tabletop game? It’s fairly straightforward. Assume that between sessions player characters are “doing stuff” That was mostly the assumption anyway. In older editions of DnD for example most spell research or item creation took place between sessions just because of the simple fact that no one wanted to deal with it at the table. There’s no reason that players can’t give you a prioritized laundry list of items at the end of a session for them to accomplish during their down time and a handful of die rolls to go with them. Crafting, carousing, information gathering, and scouting are all simple tasks that could be handled away from the table allowing you to start the next session handing out new tidbits of information, loot, or gear. For the particularly bold, exploring dangerous areas and dungeon clearing could be handled the same way with much more risks involved. This is actually similar to the way the recently featured Winter’s Edge campaign handles quest by minor characters (skip down to the section titled “Questing”). It’s also simple enough to send out notifications between sessions with progress updates as appropriate. This can help feed the excitement for the next session or start players planning ahead if new information becomes available.

A step too far? In fact it seems conceivable that with less effort than a normal game plus some organization tools you could run an entire game that’s nothing BUT idle downtime play with no actual sessions. It would certainly be non traditional, but it has the potential to be a lot of fun in a completely different sort of way, more akin to the play by mail of yesteryear than the at the table sessions we’re more used to.

I suspect this is actually not terribly groundbreaking and that some of you have been doing this for years. If so, let me know how you do it and how it works out for you below.

*In fact, years ago I sat down with my daughter and made the progress quest character Po the Panda-man Mu-Fu monk and put kicking off Progress Quest with his file loaded in the startup folder of my computer. Every so often I would inform her of his progress. This has never ceased to infuriate her. In fact it’s probably been several years since I’ve loaded him up or given her an update… 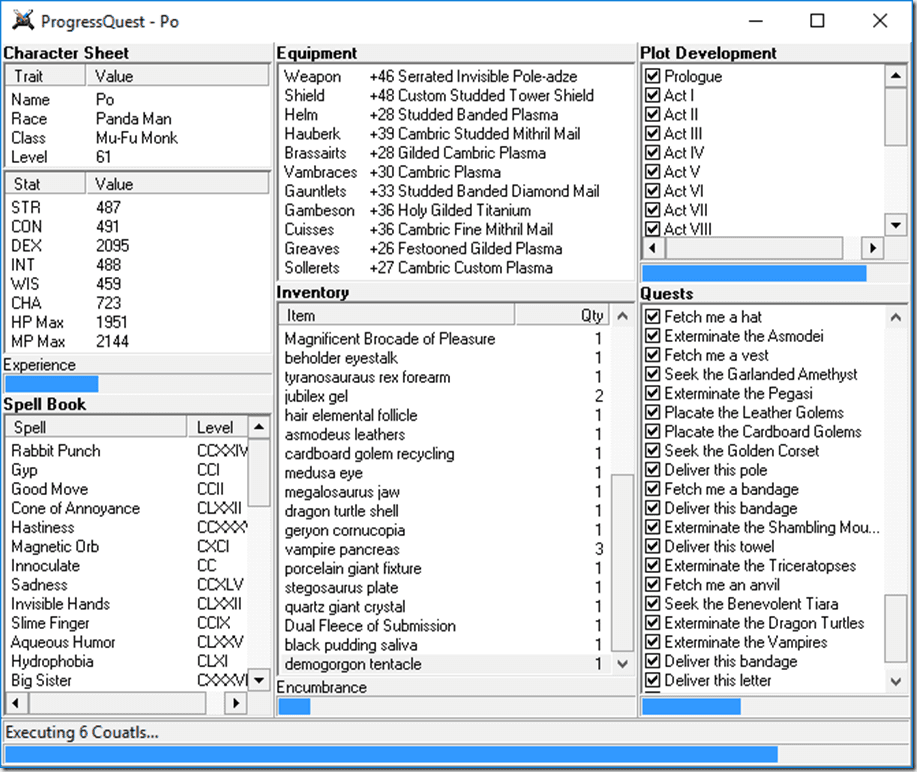