How writing a TTRPG strengthened my Chinese-Canadian identity

It’s 2018, and with the release of Crazy Rich AsiansÂ we’re starting to see a proliferation in high profile projects by Asian American and Asian Canadian creators in film and television. But the way I see it right now, the Asian design community in tabletop roleplaying games finds itself in a situation similar to that of mainstream North American cinema in the late 90s and early 2000s.

On episode 14 of the Fun with Dumb podcast, Dante Basco, best known for his groundbreaking roles as Rufio in Hook and Zuko in Avatar: The Last Airbender, said “99% of Asian roles you’ve seen in your lifetime…roles I’ve played and seen…have been the experiences of a white man”. The same goes for tabletop roleplaying games. With the legacy of Orientalist works such as Oriental Adventures (1985) and the continued popularity of Legend of the Five Rings (1995-present), consumers continue to face selective renderings of “Asian cultures” designed for western audiences. Similarly, with others like The Mountain Witch and High Plains Samurai, predominantly white consumers are given the means to explore and integrate cultural tropes from East Asian cultures into their games.

Now don’t get me wrong, these kinds of games aren’t necessarily racist. They’re just damaging in their misrepresentative natures and reliance on dated tropes.

They don’t tell our stories or enable people to tell real Asian stories.

But here’s the catch. We don’t want to be a reactive community. We can’t just shout into the void calling for proper, positive representation in RPGs. If we want to design games, consume games, and represent ourselves in ways we want, we have to do what creators in Hollywood did. Participate or remain underrepresented. Tell your stories or remain invisible. Act with your dollars and create the projects that you want on the market.

So I did just that and made my voice heard in the Canadian gaming community.

OnÂ Curiosity in Focus, the podcast I independently produce, I interviewed a retired engineer named Jack Gin. At the request of the Chinese Canadian Military Museum Society, Jack had recently discovered a lost story from the First World War that would forever change the direction of my life. It was about Frederick Lee — a Chinese Canadian man who never returned from France during the First World War. Frederick was one of approximately 300 Canadians of Chinese ancestry who served with the Canadian Expeditionary Force and the only known Canadian born Chinese soldier to die in combat during the Great War. In the face of widespread social and legal discrimination faced by Chinese communities in Canada, Frederick saw combat during the Battle of Vimy Ridge as a machine gunner for the 172nd (Rocky Mountain Rangers) Battalion and was later killed during the Battle of Hill 70. Like me, Frederick was a Canadian-born Chinese man from a family that emigrated from southern China. 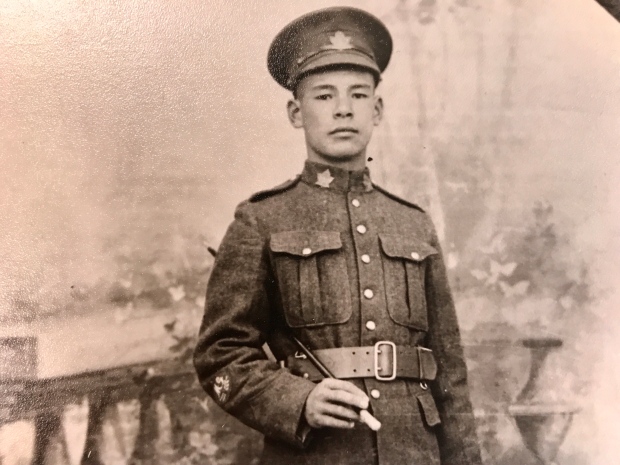 His story is simultaneously heartbreaking and inspiring. It’s one of self-sacrifice, loss, and a search for belonging.

Sounds like it’d fit perfectly into a tabletop RPG, right? I think so! So I searched, looking for a game that might allow me to tell stories in a WWI setting. There was Weird War I — Savage Worlds or Wraith: The Great War, two alternate historical spins on a First World War infused by the dark arts and supernatural. These were naturally not the best choice due to their fantastical elements. PATROL: The Trench Raiders, an expansion of PATROL — A Vietnam War Roleplaying Game and OneDice WWI also presented themselves as an option. And of course, many of the setting agnostic systems like Fate would also work.

I wanted depth. I wanted a game that included a rich historical setting that provided a backdrop through which to tell a characteristically Canadian story. Beyond the readily available games that feature a pseudo-feudal Japanese setting sprinkled with aspects of other Asian cultures, there exist few games in other genres that feature Asian characters or stories.

So alongside two friends, we began to write one of our own — Ross Rifles.Â Â

Ross RiflesÂ is a Powered by the Apocalypse game where players create and inhabit fictional members of the Canadian Expeditionary Force (CEF) stationed on the Western Front. The game will not only teach players about Canada’s contribution to WWI but also highlight the struggles and sacrifices made by Canadians of all backgrounds to the war effort.Â ThisÂ process would deepen my connection with Asian-Canadian history and complicate my understanding of who could be a member of the Canadian Expeditionary Force during one of Canada’s defining conflicts. When conducting research for this book, I was unsurprised to see that most popular sources of the war featured almost exclusively white men fighting in the name of Canada. This wasn’t the war I had come to learn about. This wasn’t the complicated and diverse fighting force I was trying to tell stories about. For me, like Frederick Lee, belonging was really important. From my perspective, Ross Rifles is about telling the story of those underrepresented in history texts and WWI media. It’s about complicating our understanding of Canadian identity during the early 20th century. It’s also a way for me to contribute to my own community here in Canada.

So let’s write our own games, create our own networks, and represent ourselves.

Daniel Kwan (@danielhkwan) is one-third of Dundas West Games and Level Up Gaming. You can learn more about Ross Rifles at dundaswestgames.com/rossrifles. He’s a creative producer, teacher, GM for Hire, and co-host of the Asians Represent! podcast (@aznsrepresent) on the ONE SHOT Podcast Network.Â