Goblins, Lizards, and Golems Oh My!

During GenCon I was able to attend a panel about an upcoming dungeon crawl by Pathfinder. The scenario is called Emerald Spire and I have been waiting for it since I found out about it from the Pathfinder MMORPG Kickstarter. I’m really looking forward to getting it as a PDF. I will most likely be the one in my group to run it because of all of the spoilers I now know. I will not be sharing the spoilers so if you are lucky enough to make it to GenCon 2014 you will be able to play it yourself spoiler free. I am however sharing the tips for dungeon making I learned from these pros. 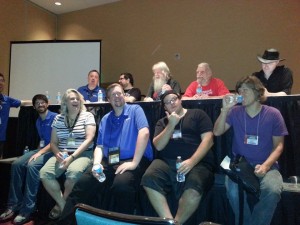 All of the epicness that are the writers of Pathfinder’s Emerald Spire.

“The thing about GMing is no one knows how to GM.” –Wil Wheaton
Mr. Wheaton was not part of the Emerald Spire group but he is right that no one really knows how to GM. On to the tips!

“Not all dungeons are locked away from the world.”
Tombs of the long dead have goblins or kobolds in them living there like a cave. Cities have been built atop of them, like the city of Rome; it has tons of catacombs under a living city.

“Leave something mysterious.”
Make something unusual or weird in the loot. Leave unknown symbols for the group to figure out later on down the road. Make a ghost that disappears after revealing a riddle. Normal people don’t travel into these places; adventurers do because these places are odd and out of sync with the world.

“Another adventuring party.”
Your party isn’t the only one travelling the world. This is a bit more work for the GM to make another party of adventurers and then roll for each of them, but for the players it is really rewarding to go up against another party and win or convince them to join together.

“Don’t bind yourself to the story, be flexible. Use the players as a source of inspiration.”
Sometimes players will come up with something completely off the wall, something that you didn’t think of. It’s one of those moments where you might want to say no, but it would be better to say yes. Sure it takes your story in a completely different direction, but it keeps the players involved. An involved player is a happy player.

“Go to seminars. Explore the real world.”
You can find influences all around you. Fellow Princess Ang and I went to a science museum and she took pictures with me to show her players how big a T-rex really was. Even going for a walk in your local park can help you describe a forest scene for your players.

“Face your fears, make it feel real.”
Many of players I have encountered are either afraid of spiders or clowns and sometimes both. I can’t put my collection of porcelain clowns up in my house because my husband has a phobia of them. You can make a dungeon feel very creepy when you put things there that you yourself are afraid of. Like Indiana Jones once said, “Why did it have to be snakes?”

“Break the paradigms.”
Dungeons can be anywhere: connect them to the sewers in your city, make the forest dark and maze-like. Think outside the box. It’ll give your players a tale they will tell others about for years to come. I had a GM turn kobolds into Victorian area London folk living underground. They were just uncivilized above ground so no one would steal their secret technology.

“Spend time on the treasures.”
Don’t always give the players what is in the book. Having treasures that lead to other dungeons or new quests are a fun way to continue the story. Currently I am running an undead campaign with my housemates and one of the treasures I gave them from the skeletons they are killing is a gold necklace with an odd symbol on it. They have yet to roll high enough or research enough to find out what the symbol is; once they do it will unlock a whole new world for them.

“The monsters live there, they can defend themselves.”
Different monsters have moved into these locations and have had to deal with the ghosts or zombies that pop up. They know how to defend their territory. Players love running into traps made by goblins or kobolds and by love I mean when their rogue or thief sees it and disables it. Otherwise for you it can be really great to see the look on their faces when they run into a trap made by a goblin.

“Make choices have consequences.”
If you have seen the movie Labyrinth then you know at the beginning of the movie that Sarah takes the advice of the caterpillar and goes the wrong way. NPCs can be tricksters too. Maybe someone they met at a bar gave them a false map that gets them completely lost. Or they kill a bugbear and its mother comes along and attacks them too, but if they had snuck around the bugbear, the mother would have left them alone.

“Use dragons.”
There are so many resources to use to find ways to use dragons. Pathfinder has them in all sizes. I have only played in one campaign where we actually fought a dragon and it was awesome.

“Playtest your dungeon.”
If you are taking your dungeon to a con with you playtest it with some of your friends back home. Or you can do what many of us do and playtest it at the smaller college cons before you bring it to Origins or GenCon. At the college cons running games is free, whereas at the bigger cons players have to buy tickets for your game. It’s much better to have a well-oiled machine at the bigger cons so people will remember you and want to play with you again.

“Making an adventure is harder than writing a novel. The players will think of things you don’t.”
The players will always think much differently than you. They are working as a group and you are just one, so they are more likely to come up with ideas that you didn’t think of. So leave some space in your write-up for your players who are very good at jumping off the tracks. I always like to have stats for creatures that are near the dungeon that I can throw at players who like to take the path not drawn on the map. Also if you make a door, players will find a reason to go through it. At my Monday night Star Wars game this happened. The GM made two bars and only enough story for one. He did however do a great job in off the cuff GMing when we split the party and went into both bars. 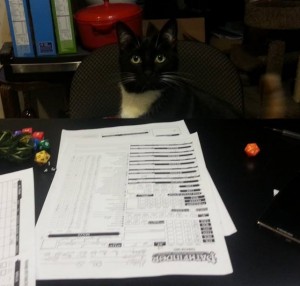 My cat taking the reigns and GMing for us one night.

“Keep things character centric.”
“Talk to your players.”
“Do what your players want.”
These 3 quotes from our dungeon making masters ring true. Listen to your players and what kind of games they want to play. See what things interest them and what kind of things they are expecting to see in this world. I have wanted to run a Faerie Tale campaign for years but still haven’t found players interested in playing that kind of setting with me. So I run undead and pirate and gangster games and we all have fun because of it.