Gnome Rodeo: And the Winner Is… (Plus GMing Links) 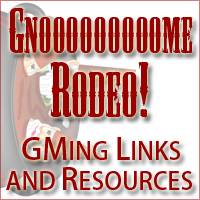 Your copy of The Encountered: Volume 1, the second book for Mind Storm Labs‘ Alpha Omega RPG, will be on its way to you shortly.

A big thank you to everyone who entered the contest and contributed taglines — we got some excellent submissions. The gnomes will be voting on our favorites (and adding a few of our own), and they should start appearing on the site before too long.

Roleplaying Tips: It’s tough to argue with adventure design tips from Wolfgang Baur and Open Design contributor Brandon Hodge, so I won’t. From Wolfgang: “The key element is to get the good ideas (and the bad ones) down while they’re fresh, and then shape them as you find time to think them through.”

Dungeon Mastering: Want to write or draw for Dungeon Mastering? Yax and the gang are hiring. It’s been fascinating and instructive to watch DMing.com’s transformation from D&D blog to e-tool developer/publisher/paid mentor — what Yax has done with the site over the past couple of years is pretty amazing.

Musings of the Chatty DM: Phil has been reviewing Tracy Hickman’s XDM: X-Treme Dungeon Mastery, a GMing tome that came out around GenCon: part one, part two. To call this review extensive would be an understatement — I believe there are two more parts still to come!

Character concept generator: Chris Chinn, who writes Deeper in the Game, is one sharp dude — and I love his recent musings on character creation. In addition to the generator (which I found helpful in creating a recent PC, as it pointed me in a new direction), he’s also had clever stuff to say about casting PCs as an ensemble. (Also: part two.)

Yog-Sothoth fundraiser: YSDC — a familiar site to just about any CoC GM — is having a fundraiser to buy a 3D camera, which they plan to use to bring you nifty 3D projects. They developed the Lovecraftian Tales from the Table DVD, so you know they’ll deliver. As a bonus, they’re also running an auction for a drool-worthy leatherbound edition of the excellent Trail of Cthulhu RPG.

Ecology of the Deva (D&DI login required): I normally wouldn’t post a link that requires a login (you’ll need a D&D Insider subscription for this one), but it’s an excellent article that I found quite useful when trying to grok one of 4e’s cooler races, the endlessly-reincarnated ex-angel deva. It also made me think about the online-only versions of Dragon and Dungeon in a different light.

While I definitely miss the print editions — which I grew up with, and which are a lot easier to read during my morning constitutional — it was very handy to be able to hit that link, print out one article, read it, and know that I didn’t have to shelve month after month of magazines for one piece of timely content. I’m still mulling that one over.

Tucker’s Kobolds: If you weren’t reading Dragon back in the late ’80s and early ’90s (this editorial is from 1987), you may not have heard of Tucker’s Kobolds — and you owe it to yourself to check out this site. It’s a straight-up reposting of the original TC editorial, and will give you an entirely different perspective on one of old-school D&D’s wimpier races, force multipliers, and the deviousness you can get up to as a GM. (Via The Labyrinth.)

And to close out, delicious gnome stew, as seen on the menu at a restaurant in Barcelona. Thanks to Gnome Stew reader Lord Inar for forwarding this to us.

3 Responses to Gnome Rodeo: And the Winner Is… (Plus GMing Links)