This is the fifth and last in our series discussing the five geek social fallacies as initially written about by Michael Suileabhain-Wilson on his blog ten years ago. Each day this week, we’re going to hear a different princess’s (author’s) thoughts on this. We’ve heard from Margaret, Lisa, Caitlin, Alana, and now you get to hear from me, Ang. Specifically, we’re discussing GSF1 – Ostracizers are Evil. For the full description of that particular fallacy, check out the previous post or even go read the original article. 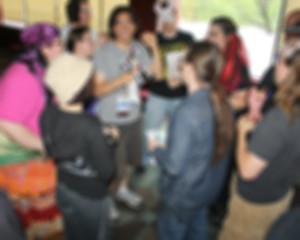 I was bullied. Some of it was because I was a bit socially awkward and into ‘weird’ things like comic books and fantasy and science fiction. Some of it was because I was ‘big’ (I was tall and big boned – I wasn’t actually overweight until later). Some of it was because of the way I reacted to the bullying; it was entertaining. Middle school was the worst of it, where I spent most of seventh grade dreading walks down the hallway between classes or the interminable bus ride to and from school. High school actually wasn’t as bad, but by then the damage had been done. I expected cruelty or invisibility as a default rather than a painful exception. When I was a high school sophomore it took one friend a full three months of the school year for her to get me to realize she honestly wanted to talk to me and wasn’t trying to make fun of me. (Thank you, Nancy.)

I tell you this to explain that I fully understand where the behaviors of GSF1 come from. If you’ve been on the receiving end of social ostracism and abuse the way many of us that identify as geeks do, you know that pain down to your core. For most of us, the idea of inflicting that same pain on anyone else is unthinkable. When we find others like us and FINALLY get that sense of belonging, it’s often like discovering an oasis in the middle of a desert. Why would we ever deny that salvation to someone else?

Because they’re being a jerk, that’s why.

That admirable desire to accept people often leads to a misguided tolerance of things that should not be tolerated. Whether it’s an issue of personal hygiene, obnoxious jokes, rude behavior in or out of games, or even inappropriate ‘flirting’ (what you’re doing is called creeping, dude), too many geek groups are unwilling to actively evict the member. Thing is, this doesn’t mean that people are unaware of the problem. It’s often the elephant in the room; the thing everyone knows, but no one is willing to directly address.  And that leads to one of my biggest pet peeves: passive aggressive behavior.

I’ve seen this too many times in the social groups I’ve been part of: someone is being a problem, but no one wants to address it directly. Instead, they bitch behind the person’s back and pretend everything is okay when the person is around. They will do subtle, rude things and then deny there’s a problem if confronted. They will do anything but outright exclude that person from the group.

Sometimes this works. Even clueless people can occasionally pick up on when they’re not welcome. Plenty of times it doesn’t work, though. The truly obnoxious or rude perpetrators won’t care and will still keep joining in and doing that exact thing that bugs the crap out of everyone. What’s even worse, though, is when the person actually is a friend who’s not too bad, but they don’t even realize they’re pissing people off because no one will say anything. Sometimes it works because YOU decide to stop hanging out with a group of people to avoid one person.

Look, we’re geeks and nerds. We’re generally smart people. Social stuff can be confusing and overwhelming, but it’s not rocket science. Some of us actually DO rocket science. It is perfectly okay, and the right thing to do, to tell someone if they’re doing something that’s bothering most of the members of a group. It is also okay, and absolutely the right thing to do, to tell them they’re not welcome back if they don’t correct the problem.

Don’t let one jerk ruin the fun for everyone.