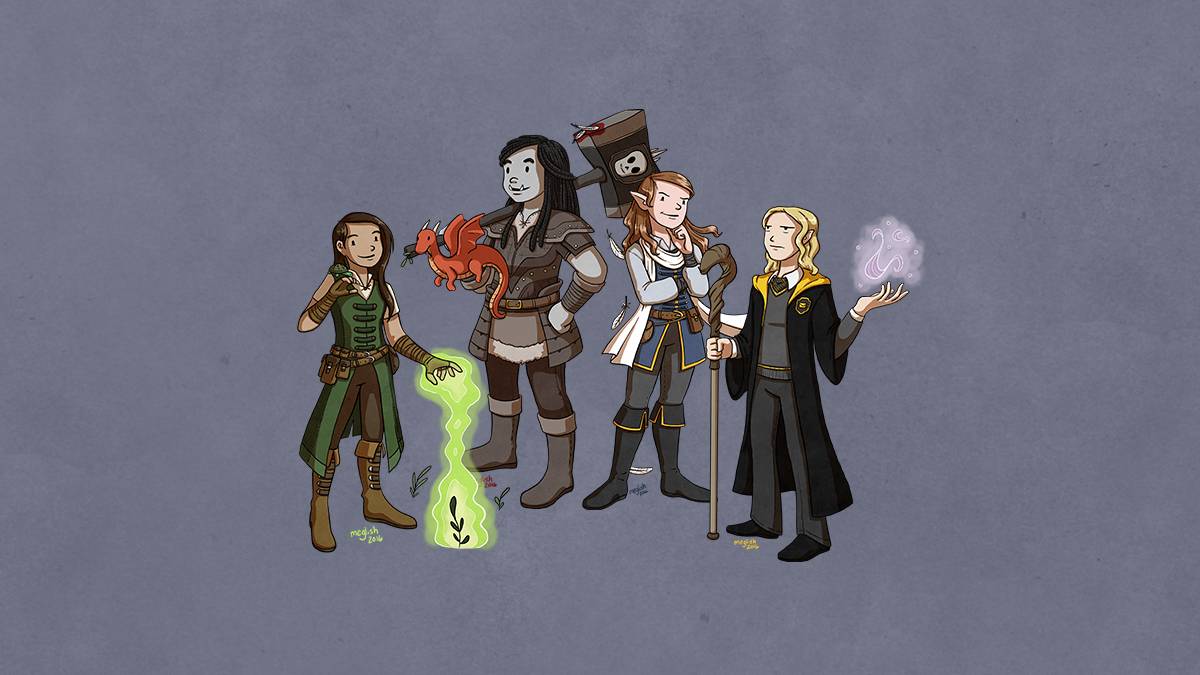 From left to right: Hazel the Druid, Mayte the Fighter, Ivy The Rogue, and Ebb The Sorcerer Â  Â  Â  – Art by the incredible Meghan Dornbrock (@meglish)

A month or so back, my friend Nicole wanted me to help her get into Dungeons and Dragons and tabletop roleplaying in general. She had already been seeding the idea among some friends of ours, and I had a group of interested people who were all new, or practically new to tabletop roleplaying. They were eager to learn, but their experiences were all pretty tangential to what D&D was.

Some of us had played some Fiasco before, and in talking with the players about what they were unsure of in the upcoming game, I struck upon an idea – Fiasco is the perfect thing to introduce the new players to Dungeons and Dragons. While it may seem an unlikely lead in to a pretty standard D&D game, a slightly modified game of Fiasco set in a standard fantasy gaming trope universe might be the perfect thing to get the new players used to the roleplaying aspects of the game and the fantasy/adventuring themes.

Fiasco is the perfect thing to introduce the new players to Dungeons and Dragons.Â
There are some problems using straight out of the book Fiasco for this exercise, the first of which is that Fiasco’s outcome table and play style usually mean that things end poorly with multiple of the players having betrayed, killed, or otherwise done another player wrong. That doesn’t bode well for the party unity style of most traditional role-playing games. The core interactive element and acting focused parts of Fiasco are perfect for the exercise. So, in order to use Fiasco as a lead in to other sorts of gaming, it was time to hack it all to heck. There were a couple of different tactics I took while hacking Fiasco to fit my needs. 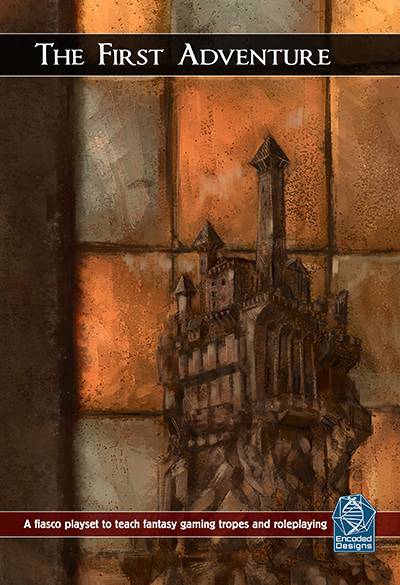 I put the Fiasco experiment into practice as the group’s first adventure, and it was an incredible success. As a first session, it was far less stress. The players developed their character concepts and I could take more time to explain elements of the setting and some of the tropes of gaming, rather than getting into the mechanics and overwhelming them. I could help the players get used to narrating their own actions and acting out their characters without worrying about balancing other new things they would have to learn. The group also built an incredible backstory together. They determined that one of the locations–an old opera house–was the place in the city where they were squatting, and built up many player concepts like Mayte the Orc’s dislike of birds, Hazel the Druid’s use of alchemical supplies like the juice of a “truth turtle”, Ivy the Rogue/Pirate’s willingness to trick her party mates but remain loyal, and Ebb the mage’s lack of enthusiasm for following the rules of the communications guild. The group built a strong Rivalry with the gnomish head of the horned crusaders (Reggibill) and snatched the Dragon Orb from his clutches.

Moving Forward
I gave the players the option to make their own characters for the game, or if they wanted me to, I could make D&D versions of the characters they established during the Fiasco game. Two players were intimidated by the spell-casting classes they picked, so I generated a sorcerer and a druid with spell cards so they wouldn’t have to remember everything. Two others built their rogue and their fighter with a little help. We moved into the next session with a focus on their characters and learning the rules, but with a narrative of meeting for their first adventure already established, they had a much easier time focusing on the mechanics. Roleplaying came easy for the D&D game elements, and the transition from describing to rolling the dice to determining success went well. There was a little hitch in reigning back narrative control over what was possible, but I would personally rather have the players suggesting incredible ideas than feeling limited in what they could do.

Final Outcome
The experiment was hugely successful, and I’d recommend it as a way to introduce new players to gaming in general. One of the things I’ve found most players hesitant to do is to act out their characters. We all have a model for the rules of a game in the boardgames that most people have played, but not everyone is used to acting out their characters. Jointly, the tropes of D&D gaming are like many of the elements of fantasy movies, but they are hard to map if you aren’t well versed in action fantasy tropes. The experiment was so much of a success that I cleaned up what I used to run the initial game and released it with Encoded Designs as a playset for others to use Fiasco for teaching gaming to new players. That playset, titled The First Adventure, is available here for free. I hope you consider it when you’ve got a group of new players that you aren’t sure how to get used to the tropes of gaming.

What do you do to get new gamers into your games? What is your best gateway game? What are the things new players seem most hesitant about when they are trying to learn?

If you want to grab a copy of The First Adventure for yourself, find it here for free. We released it through Encoded Designs and we sincerely hope it helps bring new gamers into the fold in an easier way!
Please feel free to share it and spread the word!
http://www.drivethrurpg.com/product/204708/The-First-Adventure–A-Fiasco-Playset-to-Teach-DD-to-New-Gamers

4 Responses to Fiasco To Teach Gaming To New Players