Today I am going to review a game that does not require a GM. Yes, its true.  Let me repeat that. Gnome Stew, the leading blog for GM advice, is going to review an RPG that does not use a GM. Today I will take you through the game book and discuss the nuts and bolts, and then tomorrow, I will show you why playing it will make you a better GM, and your players better players. Trust me…what could go wrong?

Disclosure time—Bully Pulpit Games was generous enough to provide this humble Gnome a PDF copy of Fiasco for this review. The rental car, the trunk full of weed, and the Armenian gangsters I had to provide myself.

Laura: You left a dead prostitute alone in the desert?
Kyle: She’s not alone… 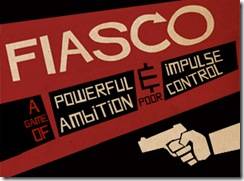 I have a sick sense of humor.  I laughed hard at “Very Bad Things” and “Lock, Stock, and Two Smoking Barrels,” as well as most of the movies in that genre. There is just something about those crazy plans going down in flames that has me laughing when the bodies start piling up. So, when I read about Fiasco, over at The Dice of Life , I was hooked.

The best summary of the premise for Fiasco comes right out of the Fiasco  book itself, and so I will quote it rather than trying to paraphrase it:

Fiasco is inspired by cinematic tales of small time capers gone disastrously wrong – particularly films like Blood Simple, Fargo, The Way of the Gun, Burn After Reading, and A Simple Plan. You’ll play ordinary people with powerful ambition and poor impulse control. There will be big dreams and flawed execution. It won’t go well for them, to put it mildly, and in the end it will probably collapse into a glorious heap of jealousy, murder, and recrimination. Lives and reputations will be lost, painful wisdom will be gained, and if you are really lucky, your guy just might end up back where he started.

The Fiasco rulebook is 130 pages in length, with single column text.  The cover and interior artwork, were done by John Harper , and has this very mod, 60s movie motif done in black, red, and gray.  The artwork looks like it belongs in the opening credits of a movie.  It’s very well done and unique, giving the book a very tangible feel.

The text is well written and in a tone that complements the artwork.  It has good examples, as well as tips for things to look out for during play. Each chapter has a great bulleted summary at the beginning also facilitating learning the game.

The book reads very quickly. I was able to read it in 3 separate sittings over a weekend. The rules take up about 55 pages of the book, with the next 50 or so pages containing information and tables for running the game in four different settings. The remainder of the book contains an actual transcript that is a great help in understanding how the game is played.

Fiasco is a shared narrative game. It requires 3-5 players, no prep, and no GM.  The game is created on the fly, with the players taking turns narrating the story.  Each player brings four d6 dice: two white, two black, to the table. These are then pooled into the center of the table and are used during the game.

Once all the characters are defined, the game begins. Fiasco uses a story structure based on the its genre, with five distinct sections:  The Setup, Act One, The Tilt, Act Two, and The Aftermath.

The Setup starts by picking a playset for the game. The game comes with 4 playsets:

Additional playsets are available on The Bully Pulpit’s webstie.

Each playset contains a series of lists of Relationships, Needs, Objects, and Locations. The players then take turns selecting items off of these lists to define their specific session. The items are selected by taking a die from the pool matching the number of an item from the list. The lists are arranged in six categories, with each category having six elements.

For example:  Two players may decide their relationship is based in crime; a gambler and his bookie, and that between them they share The Chicken Hut.  Perhaps that is where the gambler places his bets, or where the bookie has set up shop…

After the Relationships, Objects, Needs, and Locations are defined, the group then takes a few minutes and comes up with their characters working with their relationships among the other characters, and the needs, objects, and locations they share. Characters do not have any stats, skills, or feats, just a relationship and perhaps a need, object, or location. That’s it. The rest is up to the player.

The setup is the key to the game. Done correctly and as a group, the game will take off when play starts. It is worth taking time at this point to make sure that all the characters are set and that everyone is on the same page.

Act One comprises the first half of the scenes for the game, and it typically establishes what crazy plan is about to take place.

The actual play of the game takes place in scenes; one scene for each die in the pool.  A scene is focused on a specific character and is narrated by a player. On a player’s turn, the player may decide to set up the scene (framing it), and let the group determine the outcome (good or bad), or the player can allow the group to frame the scene, and the player can determine the outcome. This is a great mechanic as it grants a certain level of control to the player, whose turn it is, but at the same time, forces the player to improv part of the scene, based on the input of the other players.

Unlike a traditional RPG, the player who is narrating is in complete control of the scene. There are no skill checks or challenges to be made. The player just describes the action, and any dialog. The player can involve other players’ characters in the scene, allowing them to participate, or can even ask other players to act out other minor characters. The group is welcome to offer up suggestions as well, but in the end, the player whose turn it is, is the narrator.

The outcome of the scene is represented by either a white die (for good) or a black die (for bad), which is taken from the pool of dice established at the start of play. If the player is resolving the scene, then he can take the die representing the desired outcome.  If the player has framed the scene, then the group determines the outcome by passing a die from the pool of dice to the player. In Act One the narrating player awards the die from the scene to another player  in the group.

For players who have not played in a diceless game before, you may experience a bit of anxiety in the sheer openness that the narrating player has. It is a big responsibility to have to move the game along in an entertaining way, based on the last player’s scene, and leaving something for the next player. The good part is that anxiety goes away quickly and in a few scenes, it feels totally natural.

After the last scene in Act One, comes The Tilt. The Tilt describes those events that send the plan established in Act One into disarray. Players roll the dice they have accumulated in Act One, and the player with the highest total of white dice and the one with the highest total of black dice, choose the elements of the Tilt from the Tilt list, which is set up in a manner similar to the Relationships, Needs, Objects, and Locations.

Once the elements of the Tilt are selected, the group takes a few minutes to figure out how they apply.  Once very one is comfortable with how the Tilt is going to occur, then Act Two begins.

Act Two is where The Tilt comes to fruition and where the wheels come off the wagon.  It comprises the last half of the scenes, where the action is heading to the tragic and at times sickly funny set of events that will lead to the finale of the story.

Act Two is also played in scenes, just as Act One, with the only notable difference being that in Act Two the player keeps the die that he selected for his scene.  How many dice and what colors of dice will ultimately determine the fate of the character.  When the final scene is played, then comes the…

The Aftermath determines how your character survives the story. Each player rolls and totals the dice they have accumulated during the game, and consults the aftermath tables in the rulebook. The tables give you guidelines for how things turn out for your character. Roll well, and you might just get out of this in once piece.  Roll poorly and you likely will not survive.

Once each player’s fate has been determined, The Aftermath is then played out in a montage of scenes, with one cut of the montage for each character and for each die that the player acquired during the game.  Each player describes his own cut for his character, keeping in mind his ultimate fate.

Fiasco is not a game that supports campaign play. While it would be possible to continue the story after The Aftermath, in most cases the characters are in no shape to participate in a subsequent plot.  This game as a one-evening type of game.

How Does It Play?

The Fiasco rules are a great and very efficient rules set that do exactly what they were designed to do; which is to play out a fiasco.  The rules do an excellent job of setting up the all the pieces, and then gets out of the way, allowing the players to take the reigns and create the story.

Today was all about the Fiasco game, and tomorrow, we will take a look at how my first game of Fiasco went. As a bit of a teaser, we will talk about a Fiasco called:

–A tale of large women, a large dog, and two bookstore owners in a rundown mall.

Fiasco is available on The Bully Pulpit website, DrivthruRPG.com, and at the Indie Press Revolution.  It is available in both book format and PDF.