Fiasco: In Action And Why You Should Play This Game

When we last left off, I had taken you through the Fiasco book and mechanics. (If you missed yesterday’s article go back and read it…now). The real question is, how does this game actually play, without any prep or any GM? The short answer is that it does it quite well, but to really understand, let me tell you about a guy name Rico.

Shortly after I finished reading the Fiasco rulebook, my group and I were supposed to have a Witchcraft game, but it was canceled when one of the players was sick (read: hangover). We decided to give Fiasco a try. We gathered a total of four players and decided to use the Tales From Suburbia playset.Â 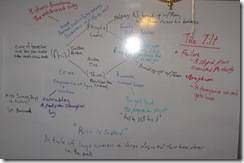 While the Fiasco rules suggest that you use index cards and post-it notes for documenting relationships, needs, objects, and locations, we put the whole thing down on a dry erase board in my gaming lounge, and I thought I would share it with you.

After our Setup we had the following:

Act One was all about Lance and Rico conspiring together to kill Carlton’s show dog, and Tina and Carlton getting wind of the plot and preparing to get them first. The first few scenes were a bit rocky, but by the fourth scene everyone had gotten comfortable, and the plot had begun to pull itself together.

Then came the Tilt.Â  Lance and Rico came up with a plan to run over the dog outside the dog show, but they miss and run over Carlton, only clipping the dog in the head, which then sets the dog on a murderous rampage as it reverts to its dog fighting days. Then things take a turn for the worst.

In the end, the mall burned down, a store clerk was shot, a mall security guard was shot, several prize dogs were mauled, the dog vanished in the fire, Lance was arrested, Rico fled the country, a badly burned Carlton was forced to work in a chain book store, and Tina…well she broke up with Rico, but found love and a new puppy in the end.Â  It was a total Fiasco.

Overall, the game play was very easy. The Fiasco rules do an excellent job of helping to create the setting, and then allowing the players to create the story. The dice pool becomes a very versatile tool, that gets re-tasked for several activities: The Setup, The Tilt, and The Aftermath. This keeps the rules very tight.Â  In our first game we started to discover some very interesting strategies for the dice pool, such as using up more positive outcomes in Act One, so that Act Two would be much more chaotic.

Another mechanic which really shows how well the game is constructed is the scene mechanic of framing vs. resolution. It gives the player plenty of narrative control, while at the same time maximizing the input of the rest of the group. That coupled with the differences in dice accumulation between Acts One and Two, make for very interesting decisions in both parts of the story.

My favorite aspect of the game is The Tilt. This genre of story is known for that moment where everything comes off the rails, and you know that everything is about to take a sharp turn into disaster. The mechanics of The Tilt do an excellent job of creating that event, and our group was laughing and yelling as the elements of the Tilt were selected, and the remainder of the story opened up before the group in a collective “ah-ha” moment.

The total game was 2.5 hours long. After the game was done, we spent another 30 minutes laughing about the events of the game and just how naturally the game came together.

Why This Will Make You A Better GM

Fiasco is a game based on spontaneous narration with the player having to either react to a scene being framed for him or having to steer the narration to the conclusion the group desires. There are no rules, no random encounter charts, no dice to hide behind. What you have is a map of relationships, needs, objects, locations, and your imagination.

This game will sharpen your ability to improvise story on the fly, as well as improvise off of ideas from others. These are two skills that are critical to a GM. Improvising story on the fly is key for being able to keep a session going, when the players have drifted from the established story, and ultimately the evolution of this skill leads to the ability to create games with little or no prep.

Just as important, the ability to improvise off of the ideas of others raises your GM skills from being able to run an adventure to creating a fully immersive story. This skill is one that allows you to read the wants and needs of your players based on their actions, and then modify or improvise the story to create those totally collaborative story moments which become those unforgettable moments in your campaign.

If you are one of those GMs who has not become comfortable enough to hand over partial control of your campaign to the actions of your players, or worse are a Conductor GM (one who drives the train), this is a game that will teach you the power of collaborative storytelling, and show you how the input of the group is one of the most powerful GM tools.

How This Will Make Your Players Better

Players will also benefit from Fiasco as well. Fiasco will teach players the importance of creating openings for the GM to draw upon. Every scene in Fiasco builds upon the previous scene, so each player in the game needs to craft a scene that not only furthers the story, but creates it in a way that there is something for the next player to take and continue.

Players who apply this skill in traditional RPGs will find that the their game experience will be vastly enriched when both the GM and fellow players are able to take the hooks that they create, and run with them building that shared story, rather than just being an island within the plot.

Why This Book Should Be On Your Shelf

Fiasco is a great addition to your gaming collection.Â  First and foremost, Fiasco is fun to play. It is a game that is set for one type of genre, and its smart, subtle mechanics fully support it.Â  Every rule and every item on the playset lists support the setting and the type of play. They form their own guide, gently leading play without putting anything on rails.

Fiasco is a great game to have if your scheduled session is canceled because of a player not able to make the session. The game plays with as few as 3 players and with no prep, so this becomes the kind of go-to game that can jump in and save a blown session.

Fiasco is a game that works for both experienced and novice RPG players. In our playtest, we invited a friend, who does not play RPGs, and had not really seen any of the movies that the book recommends. That player had no problem picking up the rules, and no problem advancing the story when his turn came up.

If you have ever desired making a deal with a meth head to steal a rare comic book from a strip mall comic shop with nothing more than some duct tape, a can of drain cleaner, and a black powder pistol, this is your game. If you enjoy collaborating with a group of friends to build a story from a list of elements, being lead from scene to scene based on the input of your fellow players and your own wits, this is your game.

Fiasco is available on the Bully Pulpit Games website, DrivthruRPG.com, and at the Indie Press Revolution.Â  It is available in both book format and PDF.

2 Responses to Fiasco: In Action And Why You Should Play This Game