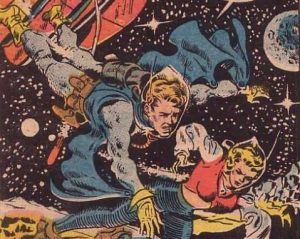 When playing pretend as a kid, we always played established media characters. We were Luke Skywalker and Han Solo, Batman and Robin. We were never “generic Rebel soldier” or “Superhero who’s kinda like Superman.” However, in my experience, playing established characters is much rarer in roleplaying games. Perhaps people want to create their own heroes, or perhaps feel that an existing character’s traits will tie their hands during play.

In this article, we’ll look at some of the advantages and concerns with playing established characters. The lists won’t be exhaustive, but hopefully will provide you with some food for thought for your own future games. Let’s look at the advantages first.

FAMILIARITY— When introducing new players to roleplaying games (or even a new system), you might consider established characters. People know how Mr. Spock or Agent Scully behaves, so they can focus on learning the rules rather than deeply considering how their character might act. Plus many people would consider trying a roleplaying game if they are really into a book, movie, or TV series. Media franchises can be one way to get people interested in the hobby in general.

FUN – This is the best reason of all. Who doesn’t want to say “Because I’m Batman,” or to make the Six Million Dollar Man “Ch-Ch-Ch-Ch-Ch-Ch” sound? Outside of getting out your collectible figures (not dolls, never dolls) and playing on the carpet, when are you going to get to do this? Is it silly? Maybe. But it’s also stress relief, and I’ll take it.

GET TO PLAY FASTER – Gamemasters (GM’s) can prepare pregens before the game, reducing start-up time. Spending an entire session creating characters without ever playing them can be a deal-breaker for many new players. If you are playing in a large universe, you may want to ask players who they would like to be so that you can have character sheets prepared and ready to go.

POWER DISPARITY – There is often a power disparity between characters appearing in the same media. For example, Batman is much stronger and wiser than Robin. In terms of superpowers, Superman outclasses them both. As another example, in a Star Wars game, Chewie won’t get to do as much roleplaying as Han Solo because of language issues (and he can’t rip everyone’s arms off!). This is not an insurmountable problem. Some systems are more cinematic and can handle power disparity quite well. Also the GM can provide alternate paths to accomplishing the same goal. Still, it is something to consider for your media-based game.

MISSING ROLES – If you are using media characters, you may find yourself missing some of the traditional (and perhaps needed) party roles. For example, there was no clear rogue among the Fellowship of the Ring. This can be a problem in any game, especially if you have a small number of players. GM’s may wish to consider rounding out the party with NPC’s or having some friendly allies available from time to time.

BUT I WANT TO BE BATMAN – Everyone can’t be Batman. Some players may be disappointed if they can’t play their favorite hero. There are some ways around this. If you are running a time travel game, include different versions of the main character from different timelines (Batman of Zur-En-Arrh anyone?). You might ask players to list a backup favorite in case their first choice is taken. Lastly, you can always rotate the characters if you run the game more than once.

Using media characters might be a nice diversion for a one-shot or short campaign. It may encourage players to stretch themselves beyond their usual roles. Who knows, it may blossom into a full grown campaign (Six Million Dollar Man Campaign, I still pine for you). As a final thought, consider talking to your players first. You might be surprised at their level of interest, and it fosters buy-in for the eventual session if they have a voice.

Have you used media characters for a one-shot or campaign? Do you recommend it? What other pitfalls or concerns should we consider? Let us know below.