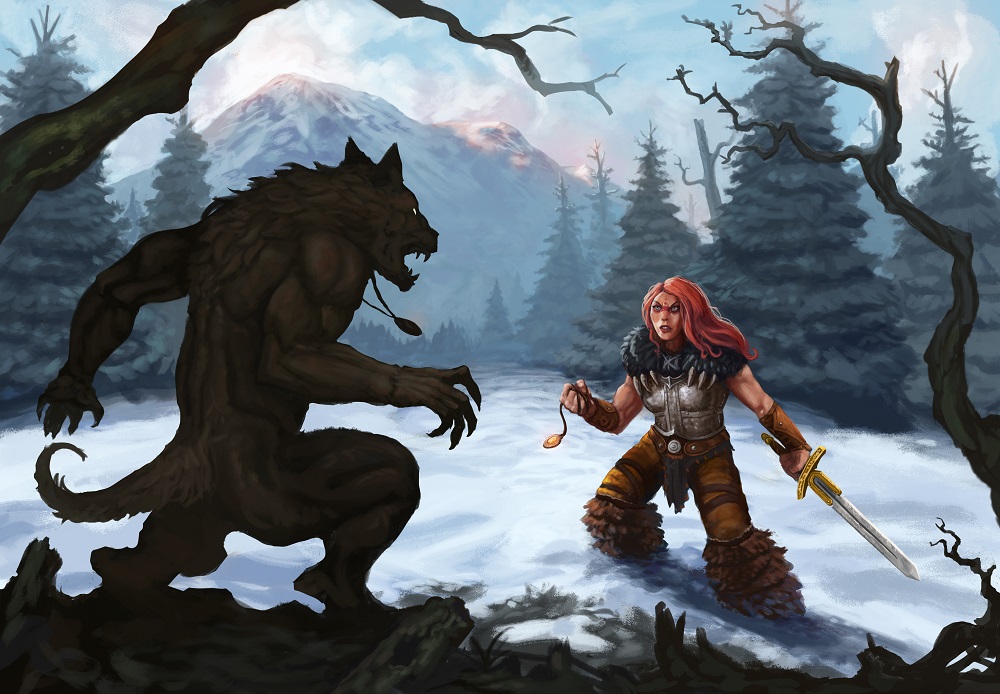 In a lot of media, we see heroes that are striving against someone or something invincible. There is one narrow band of vulnerability to exploit to ensure success. The problem is, many roleplaying games don’t create this same feeling of tension and pacing to exploit vulnerabilities.

What I’m going to look at in this article is a way to create that pacing by generating resources, and I’m going to try to show what that might look like in different game systems. Because I’m tackling multiple game systems, keep in mind you may want to play with these options to get the right “feel” for your game.

Games often have existing mechanics for this style of vulnerability. In multiple editions of D&D, many creatures are immune to damage except from specific damage types. The Fate Adversary Toolkit introduces the idea of a “lock and key” system, where some opponents can only receive stress if the player characters hold the “key” to their vulnerability. In the Powered by the Apocalypse game Monster of the Week, it’s not possible to permanently defeat a monster unless its vulnerability has been ascertained.

This “on/off” form of vulnerability can create tension, but there are times when that vulnerability feels less satisfying if the characters run into another version of the same monster later, obviating the need to research to learn the vulnerability.

What I’m looking at here isn’t so much the “magic substance that does damage to the threat” vulnerability, but those vulnerabilities that are hard to consistently exploit. This means that the group is going to deal with resource management and generation during the fight, reinforcing that this opponent is extremely dangerous, even once it has taken damage.

The meta-narrative currency we want to create here is Vulnerability. The concept is that each time the characters want to cause harm to an opponent, they need to spend Vulnerability to cause standard harm/conditions on the opponent or threat being engaged.

This means you can’t cause stress in Fate or Cortex, you can’t do damage in D&D or Fantasy AGE, and you can’t inflict harm or conditions in a Powered by the Apocalypse game without spending Vulnerability.

Powered by the Apocalypse

An example move for generating Vulnerability in a Powered by the Apocalypse game would be something like this:

(The actual stats are obviously going change based on the PbtA game in question, but here is the structure)

In either of these cases, characters would use an Overcome action to fill up the boxes on the track. Depending on the situation, this might have a static difficulty, or be actively opposed by the threat. Threats that don’t fully understand their own vulnerabilities might have a static difficulty, while opponents that are canny and strategic in their thinking might provide an opposed check.

You can represent research by allowing the PCs to make an Overcome check outside of combat, while learning about a threat, which allows them to “prefill” some of the countdown boxes on that threat before they directly engage it.

That said, there are limited ways to generate these resources in different games, and players may need more than their starting amounts to deal with a threat. In Star Trek Adventures, it is possible for characters to create scene aspects or to spend Momentum to create them. In this case, you might create a “Temporary Vulnerability” scene aspect that can lessen the difficulty of acting against the threat, and allowing it to be engaged normally, but only for the next person invoking that “Temporary Vulnerability.”

That means that characters will need to decide between spending Determination or Momentum, or spending their actions to create scene aspects for others to invoke against the Invulnerable threat.

In addition, you might add extra Stunt spends to supplement this system. For example:

In Dungeons and Dragons 5e, you can create a resource called Vulnerability. You can’t inflict conditions or hit point damage to an Invulnerable threat unless you spend Vulnerability to do so. You can generate Vulnerability in the following ways:

Creatures that are immune to specific effects are always immune to those effects. For example, an Invulnerable red dragon is not affected by fire, even if Vulnerability is spent. If a threat is immune to a spell, that spell cannot generate Vulnerability.

How it Looks in Play
While games that use the PbtA system, Fate, 2d20, or Cortex do this a bit more naturally, it is important to explain why the Vulnerability is being generated and the narrative around how it is being spent.

It may go without saying, but it’s very important to add narrative to each of these methods. While games that use the PbtA system, Fate, 2d20, or Cortex do this a bit more naturally, it is important to explain why the Vulnerability is being generated and the narrative around how it is being spent.

For example, in a Fantasy AGE game or D&D, it’s important to make sure that characters aren’t just attacking and expending spell levels to generate Vulnerability, but to explain that they are pushing and pulling an opponent in different directions to see how the threat reacts, and spending Vulnerability involves putting together the movements and actions being taken to strike at the exact right moment, in the exact right way.

At some point, you may feel that the pacing of the fight is dragging a bit if you use this method. Feel free to either create a threshold of Vulnerability where they reach critical mass, or determine that this last spend is the final straw, and from that point on, the threat’s vulnerability is no longer persistent.

Several different products explore how to deal with stages of invulnerability. If you want to dive into these topics a bit more, I’d recommend picking up the Fate Adversary Toolkit (Fate), Iron Edda Accelerated (Fate), or Mythic Odysseys of Theros (D&D 5e). I know this is only the tip of the iceberg when it comes to adding elements to boss fights to make them more strategic and epic.