In Boss Around the Gnomes, I asked Gnome Stew readers what you’d like to hear about the 4e core books from a GM’s perspective. I wrote a lengthy, detailed post about my first impressions, and now I’m ready to tackle the specifics.

Rather than C&P large chunks of my other post, if a question was substantially covered in my review I just pointed thataway for a few answers. It was fun answering your questions, and I hope my answers are useful.

(Questions about actual play and requests for future articles will have to wait, unfortunately — this is all based on reading, not playing.)

As with the other post: SPOILERS AHEAD. If you’re not ready to read about 4e, stop here! 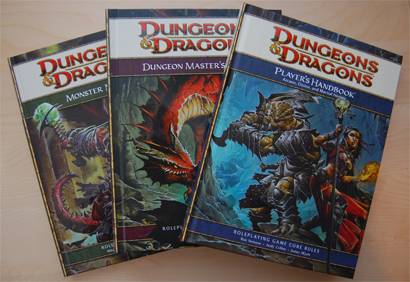 Tell me about the system (TheBoeh)

Something that might really help me is to hear reviews of the system. It’s going to be quite some time before I get a chance to run 4th ed. and it would help to know where the system breaks down.

This is tough without actual play (which I know is what you asked for), but I can say that the system has fewer moving parts than 3.5e, which usually means fewer places to break down and an easier job for you as the GM. That said, I’m not great at spotting exploitable loopholes and so forth, especially not right away.

Ideas that would work in other games (ZacharyTheFirst)

Lesson learned, perhaps—any ideas you feel would translate well to other games.

Minions. Oh god are minions driftable. They’re not unique to 4e (Feng Shui had them first, as mooks), but they’d fit into all sorts of other games.

A minion has three elements: Their attacks are only a middling threat to a PC one-on-one, but en masse they can be trouble; they’re not easy to hit; and they only have one hit point — if you hit them and do any damage at all, they croak.

Skill challenges, which are described in the DMG, would also port well. The concept has no specific ties to D&D, and with a bit of trial and error on assessing the difficulty of a given skill challenge in another system, you’d be set.

They’re essentially encounters that require you to get X successes before rolling Y failures, stretched out over time and with lots of flexibility for using many different skills, plus room to improvise.

About those rituals… (Spenser)

So, if anyone gets the books on launch, I’d love to know more about rituals, and maybe see the table of contents from the DMG.

I’m wary about posting the ToC straight out, but my first-impressions review goes through the DMG chapter by chapter.

Rituals look great. They’re all the spells you only memorize once in a great while, they’re pricey, they take quite a bit of time to cast and — the coolest part — pretty much anyone can cast them. Party of fighters want to use Raise Dead? All they need is a scroll or a ritual book (in the latter case, there’s a minimum level), and they’re set. No cleric needed.

If you can think of a long, infrequently used spell from 3.x, it’s probably a ritual in 4e.

It appears that 4e will give GMs a whole new set of tools for constructing awesome encounters, and I would love to have Gnome Stew give advice on how to take full advantage of the new system. Topics to address might include using terrain in an encounter (4e is far more mobile), gnomes as monsters, crafting skill based encounters (one of the best ideas I’ve seen in 4e), and how to let the monsters win a fight without breaking the game.

When I first read this question, I thought you wanted to hear more about the encounters section. Now I think you’re mainly interested in follow-up articles, which is cool but will have to come later. If I’m misreading your questions, tell me in the comments!

The skill challenges are designed to be slotted in as encounters, complete with XP for success. They’re flexible enough to take plenty of time at the table and built to involve every PC — no “decker syndrome” while one PC negotiates for two hours while everyone else plays Halo.

There’s really not much to incorporating them: Any time you need several skill checks in a row to accomplish something (or have a task, like convincing an NPC to have a major change of heart, that could involve multiple checks), you’ve got the groundwork for a skill challenge.

Oddysey asked several questions, summarized as: Is it easier to prep than 3.x? What’s the gnome entry in the MM like? How should GMs use the new cosmology? What’s the tone of the advice in the books?

Yes, 4e will be easier to prep than 3.5e. There are fewer fussy bits and more tools to simplify the process, as well as great advice in the DMG for using your prep time well, adapting published adventures and so forth.

Gnomes are more like fey creatures now, with very little flavor in the MM (par for course, really). They also have a PC-style racial writeup at the back, suitable for use for PCs and NPCs with the caveat that it’s not really intended for PCs.

There’s not much info on cosmology — plenty of room for expansion has been left. If you mean the gods specifically, they’re pretty generic/universal fantasy tropes.

The tone of the GMing advice is newbie-friendly, practical and grounded in real-world GMing experience and knowledge of what people actually do with and in D&D games. It’s very, very solid. I recommend reading the DMG section of my review for a full overview.

Talk to me about your feelings (Bear)

I am more interesting in the subjective stuff. How does it feel? Does it move smooth from one scene to the next. How intuitive is it going to be for the players? The GM? Is it easy to upgrade/downgrade your encounters on the fly? Do the NPCs make sense? That is the kind of information that I am looking for.

Setting aside the actual play aspects of how it feels, it feels great based on my initial reading and skimming. Very D&D, very well done.

I had some trouble wrapping my head around the powers in the PHB at first glance, so I can see players needing a good block of time to get familiar with them. Folks used to 3.5e might need longer.

Tweaking encounters on the fly shouldn’t be too bad, since CR has gone the way of the dodo. It’s easier to balance monsters (individually and in groups) to match the party, and after a few sessions I think doing so by the seat of your pants would be pretty straightforward.

On the juiciness of GMing advice (Irda Ranger)

WotC has promised that there will be lots of juicy DMing advice in the DMG. I’d be interested in the Gnome’s opinions on the various chapters and suggestions the book might have, and how I could build on different options presented to get different results.

They delivered on that promise. James Wyatt wrote a killer book for GMs, with very few bad notes and a whole lot of very good stuff. The GMing section of my review answers your question chapter by chapter — take a peek.

First, what is the layout like? D&D has used a nonsense layout since time immemorial – stats, then race, then class, etc.

Next, I would need to know that D&D had taken a big step away from resource management. Gear and gold should not so drastically shape the course of the game. I know that players spend a lot of time agonizing over items, but as a GM, making treasure come out fairly can be tough.

In terms of structure, the order you mentioned is the order in 4e as well — but it works a lot better this time around, IMO. They make it clear that the PHB is all about acquainting you with the game and your role in it as a player, and that that starts with your main investment: your character. It flows really well.

Treasure parcels should help with resource management as well as making treasure come out right. Instead of winging treasure, you can just give out the appropriate 4 magic items (by level — you choose the items) and 6 monetary treasures per level and know that the PCs are on course.

Based on that chapter and the list of magic items in the PHB (yes, in the PHB — I love that), it does indeed look like gear is a lot less important in 4e than 3.x.

Feel like D&D or (something unmentionable)?
-Color and tone what you’d expect from D&D?
-Combat have a heroic feel, or comic book feel?
Core mechanic flexible?
Any broken class/skill/spell/ability/feat/etc…?

It feels very much like D&D. It also feels like World of Warcraft in places, but I really liked that aspect.

Ditto with color and tone. They went back to the drawing board and defined what makes a D&D world a D&D world and a D&D game a D&D game, and then built an RPG around that core. The core won’t be for everyone, but I liked it.

I’m not sure what the difference between heroic and comic book feel would be for combat, but I’m going to say heroic. The powers are cool, but not superpower-y.

I wouldn’t say the core mechanic (substantially changed only by adding 1/2 your level to most d20 rolls) is any more or less flexible than it was in 3.5e. It does feel more evenly applied, though.

I’m terrible at picking out broken stuff on a first read, or without any time playing/GMing. At first blush, there’s no half-orc with +4 Str and the spiked chain seems balanced.

One thing I really want to know: how feasible is it to play 4E without the battlemat?

It would be a giant pain in the ass without a battlemat. Even more so than 3.5e, I’d say.

Ok. Easy question. How much the 4th ed is encouraging rule-play against role-play?

Between the practical GMing advice about connecting character backgrounds and building quests around individual characters and the inclusion of skill challenges, I’d say 4e puts more effort into encouraging roleplaying than 3.5e. That said, there’s still no Burning Wheel-style social combat system and you can still roll Diplomacy to change attitudes — but overall, there are some good tools for roleplaying and encouraging roleplaying.

Thank you to everyone who asked a question (or several)! I’m open to more Q&A this weekend, so if you’ve still got questions, bring ’em on!