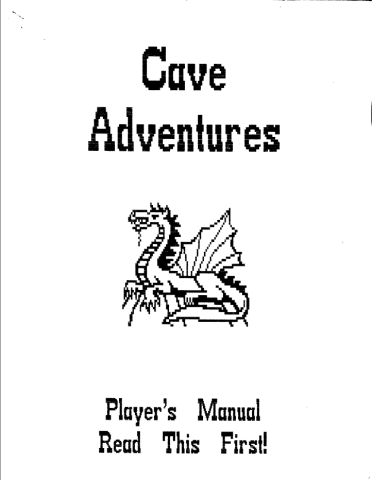 I recently came across some old PDFs while organizing and backing up some of my files. One of them was the complete rules to Cave Adventures, a role playing game I co-authored back in 1990 with Dave, my best friend for a large part of my childhood. At the time both of us were thirteenish. We wanted to run a DnD game for our classmates as a class project and while our teacher was behind the idea there was one problem: DnD and all related paraphernalia had been banned in our school.Â  Rather than let that stop us, we wrote our own game system for that project, with the intent of running a game for the next project.

Running that game for our classmates never happened. Instead I tossed my copy on a shelf and it was quickly forgotten. Eighteen years later in 2008, shortly after the inception of the Stew, my mother dropped by my house and dropped off a bundle of my school papers she had found. Inside was Cave Adventures. I scanned in the then eighteen year old documents, compiled them into a PDF and commented up the whole thing with the intent of releasing it on the Stew for everyone’s amusement.

Before I released it though, I tried to get in touch with Dave. He and I had grown apart in our last few years of high school and then gone to different colleges, so I hadn’t seen him for years. Instead of finding him and sending him a copy of our junior high project, I instead discovered that he had passed away the year before. It hit me pretty hard and I stowed the files away and forgot all about it.

I uncovered the files again not too long ago and set out fixing some corrupted pages and re-commenting in light of the seven additional years that had passed. Cave Adventures is, I promise, one of the clunkiest systems ever written, but hopefully you’ll consider the source. I pass it on as a humorous example of my early game design, an encouragement to everyone reading to keep creating, and a tribute to my fallen party member, who I hope is rolling 20s wherever he is.

5 Responses to Cave Adventures: My First Attempt at Game Design