Caitlin: The “C” Stands for Chaos

. . . given, I haven’t figured out what all the other letters stand for, but that’s not the point. The point is that this is supposed to be an introduction, and “Chaos” will probably sum up a great deal of the things I talk about. To some extent, anyway. 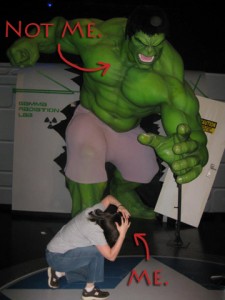 If you discount my strictly online PbP (Play by Post) years and playing Baldur’s Gate 2 before I knew what Dungeons & Dragons was, let alone the fact that there were various editions, I’ve been gaming for about a decade. I started with the Dramatic Roleplaying Tournament, which Margaret mentioned in her intro post. It’s most easily described as a no-rules, no-dice, semi-LARP, but that doesn’t quite capture the feel of it. I wound up in the DRT because it was my first year at Running GaGG (SUNY Geneseo’s gaming convention), and since I’d never played any tabletop games before I had no desire to roll any plastic polyhedrons. The lack of dice, any rule set I had to learn, or numbers I had to crunch made the DRT extremely appealing. I went on to win the tournament that year.

After discovering how much FUN it was to roleplay live instead of just on an internet forum, I was eventually lured to use dice and stat up a character for Mage: The Awakening. I was absolutely convinced I would HATE it and the whole World of Darkness/Storyteller system.

To this day my d10s greatly outnumber any other type of dice I own.

Once something with dice lured me in, it was a downward upward spiral to playing tabletop RPGs of all sorts, including D&D, Savage Worlds, Dread, Marvel SAGA, Eclipse Phase, various Cortex System games, and more. I’d played some video games before, but now I play more extensively. I also have an expanding board and card game collection which doesn’t include anything by Milton Bradley, if you know what I mean.

As for my fellow Rogue Princesses, I met Margaret at Geneseo when she happened to be assigned as the college roommate of my best friend. Ang was part of the group of people I met through Running GaGG. We’ve been PCs together, have GM’d one another (Ang is currently a GM of mine, muwahahah!), and all of us enjoy a good game!

My posts will probably be recaps of games I’ve been in, including what I thought was great and what could have been improved on, reviewing board/card/video games I’ve played, and some stuff focusing on how you, as a PC or GM, can make your games more entertaining.

2 Responses to Caitlin: The “C” Stands for Chaos