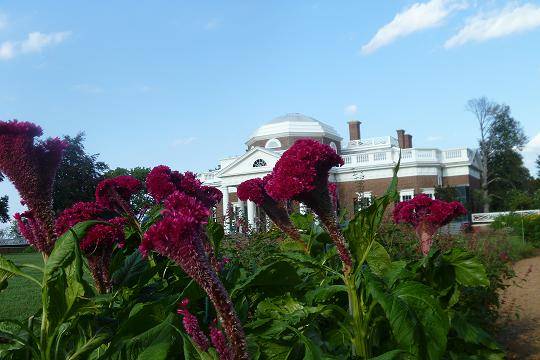 I was recently reading a fascinating book, The accidental city : improvising New Orleans by Lawrence N. Powell. It was filled with a number of fascinating facts and historical events that were new to me–or made new by the context of the book. Even more, the chapters detailing the differences between the various Louisiana implementations of slavery led me to realize just how varied the experience could be. Visiting Monticello while reading the book, combined with the excellent work on Mulberry Row presentations at the estate, made me realize that I had “research” that might add complexity to your worlds.

Many fantasy novels I’ve read feature either the nobility (the Deryni novels are a particular favorite of mine) or vaguely defined peasants destined for greatness, who soon overtop social convention. For a more authentically medieval feel to a game, try incorporating serfdom and villeins. If you want an alien feel to your game, consider borrowing several historical models for the lowest rungs of the social ladder–or merging the traits of widely separated cultures to create a unique lowest rung (or lowest several rungs) for your society.

Some fantasy authors write about horses as if they’re a type of motorcycle that just happens to eat hay. Similarly, it’s easy to skim over the lowest rungs of workers and peasants. Take some time to invest your peasants, slaves, and SINless with personality and drive. Don’t let them degenerate into grain powered robots.

Serfs are a broad class of peasant, common to Europe from the dark and medieval ages. (In Eastern Europe, serfdom continued much later.) Most serfs were not slaves, though exceptions existed. In general, individuals became serfs only when times were devastating or when protection was desperately required, as the condition was hereditary. A famine generations ago could lead to being born a serf. Serfs were owed specific protections, and were subject to many restrictions. Perhaps most strangely to modern ears, land sales included the serfs on the land! Similarly, leaving the land without the landowner’s permission was not legal for serfs–though those who managed to stay away [often in a free city or borderland] for a year and a day won their freedom–at the cost of forfeiting all rights to the land.

Within serfdom were several more specific statuses (see the linked wikipedia article), ranging from free tenants (who owed only nominal service, basically farmers renting the land) to cottagers (who had a cottage and just enough land to support a family). Various fees and taxes were assessed (eggs at Christmas, etc.), and labor was required (ranging from harvest aid only to six days a week of service).

In England, Serfs’ requirements were often written in contracts as currency (though these requirements were paid mostly in labor, livestock, and produce), while continental Europe usually wrote serfs’ contracts in terms of goods directly. This difference led to many serfs purchasing their freedom in England (but much less so on the continent) when Spanish silver (from their American conquests) flooded Europe.

Untouchables — are castes most strongly associated with India and Pakistan. (Similar castes occur in communities of southern and eastern Asia.) Untouchable status is hereditary. Social restrictions limit what members of the caste are allowed to do, though concerted effort in India (via hiring and representative carve-outs for Dalits) have widened what’s permissible.

Dalit status was associated with occupations regarded as ritually impure, such as leatherwork, butchering, or removal of animal carcasses, cleaning streets, latrines, and sewers. Dalits could make good profits by interacting in ways prohibited to the higher castes. Even on attaining wealth, they remained scorned and locked out of many institutions. Similarly, specific acts of meekness and deference were required by custom–defiance often led to beatings. Marriage out of caste was taboo–and dangerous to both. (Much of my limited knowledge about the subcontinent comes from the great book, India After Gandhi: The History of the World’s Largest Democracy, which was excellent.)

Gai’shain is a fantasy version of servitude, from Jordan’s The Wheel of Time series. An Aiel who is touched in battle swears service to his (or her) captor on his honor (toh) for a year and a day. They don white robes and refuse to touch a weapon, or even defend themselves, during that time.

While slavery did exist during medieval times, it was relatively uncommon–it was the lowest status of serfdom, with all the obligations and essentially no privileges. In later periods, it evolved into a separate form. 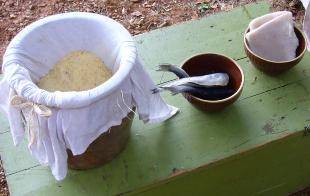 American Slavery: My history classes introduced me to American slavery, which remains my mental default, but there are many variations–and there are reciprocal responsibilities in slavery that I hadn’t learned in school.
– At Monticello, the owner provided food each week looked like the picture above.
– The owner was also obligated to provide new clothing each summer and winter, and a new blanket every three years.
– Labor was owed from dawn until dusk, Monday through Saturday.
– After their day’s labor, and on Sundays, slaves could work for themselves in their own gardens.
– Jefferson bought much produce from the gardens of his slaves for his own table–and the slaves livened up their monotonous meals with squash, melons, chicken and eggs from their efforts.
– Everything was locked down on the plantation, but theft was still rampant. Marriages among slaves lacked legal standing, and were often entirely the product of slaves without solemnizing beyond their community.
– Skilled slaves were also paid an income. (A joiner was paid $20/year, while Jefferson’s french trained chef was paid $4/month.)

Louisiana French Slavery: New Orleans was the frontier, at the edge of swamp and distant from French authority. Slavery’s hand was varied; for long periods of the 17th and 18th centuries, few slaves were imported, leading to more familiarity, mastery of French by the slaves, and a creolization of culture.
– The incomplete nature of the early settlement led to “leakage” of slaves into the swamps, including extensive semi-permanent settlements
– Early slaves who fled but were captured often pointed out that they’d never left their master’s property
– Like the American Slave, the workweek was Monday through Saturday, dawn until dusk
– Louisiana slaves commonly supplemented their income with hunting, fishing, and logging
– Custom allowed slaves to gather for recreation (particularly dances) and visit other plantations on Sundays
– Marriages were performed by the slave owners
– Cohabitation was common; masters weren’t embarrassed by their illegitimate children borne by their slaves–in fact, they often emancipated the children (or both the mother and children) and openly treated them as heirs. (If no rightful heir was born, a mulatto son could inherit. Even if a rightful heir existed, mulatto sons could inherit a one-fifth share.)
– During down cycles in the economy, slaves were sent out to labor and split their earnings (apparently 50/50) with their owners
– Specific laws and offenses varied; the laws were the Code Noir. Many of the official provisions were ignores (such as the penalties for cohabitation). Several successive codes noir were adopted through this period.

Louisiana Spanish Slavery:
– From 1763 to 1803
– Initially adapted Spanish law onto existing French norms, but grew more Spanish in tone under later governors
– Under Spanish Law, all rights (for slaves and slaveholders both) flowed from the King
– Slaves could bring suits in court against their masters for mistreatment
– Slaves could initiate offers to buy their freedom. Masters had to negotiate fair terms with their slaves, or the price would be set by the market
– Similarly, free family of slaves could initiate offers to buy their relatives
– Marriage could only be solemnized by priests… which had the side effect of being inconvenient to masters, so few marriages were recorded
– The burdens of manumitting slaves were reduced (from crown permission under French rule to a notary’s signature under Spanish), resulting in many more manumissions being officially recorded.

Ancient Greece and Rome:
In ancient greece, there were several words/terms for slaves. Many were captured in war; doulos / dmÃ´s particularly referred to war prisoners taken as booty.
– Slaves of the god owned land, and were close to freemen in status
– Common slaves often resulted from piracy and were foreign, though they could also hold property and be artisans.
– Later, slaves were more commonly women (captured in battle), while men were ransomed
– Most slaves were used in agriculture, mines, and quarries

The Greeks had many degrees of enslavement. There was a multitude of categories, ranging from free citizen to chattel slave, and including Penestae or helots, disenfranchised citizens, freedmen, bastards, and metics.The common ground was the deprivation of civic rights.

This barely scratches the surface of even the lowest rung of societies. There are many other styles of slavery (such as Roman and Visigoths), plus modern and futuristic versions of the impoverished and destitute. (How many destitute asteroid miners have you read about in science fiction?)

In the meantime, how have you emphasized the realities of peasant life in your games? Have your serfs ever been more than comic relief? Similarly, what are some traits you’ve given your own unique cultures, particularly the slaves, serfs, and spat upon? Please share your culture’s foundations with us in comments.