We’ve all been there: either in a group or internally, the debate about what to do keeps going around and around in a circle, steadily moving further away from actually DOING anything. Whether it’s happening in-game between the PCs, away from the table as the group tries to decide which restaurant to go to, or even as a certain board gamer tries to decide what to do with his turn in Carcassonne, it’s the bane of gamers everywhere. It’s the dreaded ‘Analysis Paralysis’. 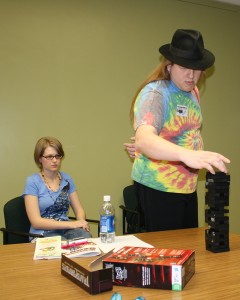 Of course, playing Dread can mean a whole new level of paralyzing decisions to make.

The phrase is so common in board game circles it’s mentioned specifically in the Wikipedia article about it. Quoting that article, “Analysis paralysis or paralysis of analysis is the state of over-analyzing (or over-thinking) a situation so that a decision or action is never taken, in effect paralyzing the outcome.” Board games, especially ones with a complex mix of tactics and luck, can present players with so many options each turn they become indecisive trying to determine the most advantageous option. Among my friends, it’s not unusual to impose a time limit on the repeat offenders.

When it comes to roleplaying games and in-game situations, it can happen in almost any system, but some lend themselves to the problem more easily than others. Shadowrun comes to mind as an RPG that opens the door wide for this, but I’ve also seen it happen in Pathfinder/D&D, Savage Worlds, and plenty of others. Any time the players are faced with a goal they need to achieve and ample time to come up with a plan, they have the opportunity to get stuck in the endless spin cycle of overthinking and over-planning. Part of this may come from old-school games where a single missed piece of the puzzle could mean a complete party wipe-out (GMs could be unyielding back in the day), but some of it is simply having too much time to plan, or too many people contributing to the plan.

When the game starts dragging on in the throes of analysis paralysis, two things may happen. First, the GM can step in to get things moving. After all, they’re usually just sitting there waiting on the players at this point. GM intervention can be anything from reminding the players that they’ve got a limited amount of time and advance the in-game clock, or having something happen that forces them to act. Either one will get the action moving again and hopefully shake them out of their overthinking. If the GM doesn’t do that, eventually one of the players is going to get bored, and that could be bad for everyone. We’ve all gamed with players that are practically walking boredom bombs. If the other players spin their wheels for too long, that player is definitely going to say to hell with it and pull a full on Leroy Jenkins.  Well, maybe not quite to that extreme since pen and paper characters don’t respawn, but parties have been split up for far less. 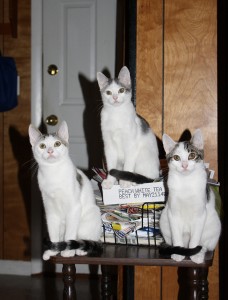 These three are my fosters. Go ahead and call me a crazy cat lady. I’m the one that gets to play with the kittens.

Players aren’t the only ones that can suffer from analysis paralysis. GMs can do it to themselves as they’re planning for their games. I’ve actually killed at least two of my campaigns from getting stuck in a feedback loop, trying to reconcile the direction the game was going with what I had originally expected to happen. Both games died ignoble deaths as I dithered back and forth on whether to adjust to the unexpected escapades of the players or try and recapture the ideas I originally had for the game. This was enough of a problem for me as a GM that I’ve been specifically working to cure myself of that indecision. Of course, I’ve also seen it happen to other GMs when I was a player. Very often, the players weren’t even aware there was a problem for the GM until the game had already died.

Finally, it can also happen away from the game when the group needs to make a decision. As a friend has been quoted as saying, “Getting gamers to do anything is like herding cats.” I currently have six cats living in my house (three are mine, three are foster kittens), so I can unequivocally state that even when there’s food involved, it is pretty much impossible to herd cats. From something as simple as what toppings to get on the pizza to the all-important question of which game to play next, gamers have often perfected the art of waffling. In this particular aspect of analysis paralysis, I often lose my patience and start bellowing all lady-like for people to make up their minds and DO something. It works about as well on gamers as it does on my cats.

Luckily, it all worked out in the end. We now have a handful of 5th edition Shadowrun characters that can get stuck in analysis paralysis in character!