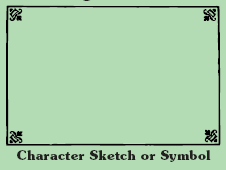 Since I was 10, there has been one part of the character sheet that has always eluded me…the Character Sketch.Â  I have never been able to draw, and so on all my character sheets, this box was left empty; mocking me with every character.Â  During my teenage years, I use to flirt with the idea of paying for a professional character portrait, from one of those ads in the back of Dragon Magazine.Â  I never did either, and just learned to live with the blank box.

In high school, I met a fellow gamer, named Wally, who was also a budding artist.Â  His work was rough (then), but he had a real talent for drawing.Â  I had just started a Teenage Mutant Turtles campaign, and Wally joined up. The players all made their characters, and Wally drew portraits for each of them. It was awesome. For the first time, the group I was in was able to share the same images of their characters.

I played a few more games with Wally, during our high school years, and at his pinnacle, he drew a complete set of Trumps for an Amber campaign we were starting. The Trumps, not only had the Elder Amberites, but also included trumps of all the player characters. When the players received their own decks (laminated color copies) at the start of the campaign, we were all amazed. Each of us shuffled through the decks; the players looking for their own characters. Again, the ability for everyone to share the same mental picture of all the characters and the major NPC’s really added to the campaign.

After the Amber campaign, Wally and I wound up parting ways.Â  We both moved to different parts of the country, and while we still talk, we have not had the chance to play in years.

So other than nice story about Wally, what is the importance of the character portrait?Â  The phrase, “a picture is worth a thousand words”, is dead on.Â  The ability to share an image of a character or NPC among the group, is a powerful tool to help create a shared imaginative experienced.Â  It helps to draw the group deeper into the game, giving everyone a common image, as foundation to build upon.Â  It is also a great GM shortcut.Â  An NPC that could take a paragraph to describe, can be shown in one picture, conveying identical of information to each player, faster than could be done with words.

Since Wally and I parted company, I am back in the same boat.Â  I have learned to live without my own personal artist.Â  Through the years,Â  the character portrait box just keeps mocking me.Â  Without access to an actual artist, I have tried a few things over the past few years with mixed success:

There are some software packages that make character portraits.Â  NBOS Software makes a program called Character Sketcher, ProFantasy Software has Character Artist Pro, and there is the free, web-based HeroMachine.Â Â  All of these use templates to allow the artistically challenged to cobble together a portrait by picking this and that.

Of the three, the only one I have used was HeroMachine, which I used extensively for a Mutants & Masterminds campaign.Â  It was easy to use, and the output was great for a superhero game.Â  As a GM, it was nice to be able to show my players a picture of each supervillain.Â  It was also good for me, as the GM. The process of creating the images for each NPC really helped to solidify their character, as it would help me focus on their personalities and powers, as I created each costume.

There are a lot of talented artists out on the Internet. Thanks to the Internet you can do a Google Image Search searching for artwork across the Internet, you can check out an artistic site like Deviant Art, or you can find some PDF’s of character images on DriveThruRPG.com.Â  The PDF products come with permission to use the images, but there may be some issue about copying someone else’s artwork, off the Internet, but if you are not publishing your characters, and are just using the image for personal use, I am sure the art police will not be coming for you.

As a player, I have recently done this for both the Star Wars game, and D&D game that I am playing in.Â  For Star Wars, I found a image of a drawing of a young Zabrak using Google Image search, and for my D&D portrait, I took the image of the Dragonborn right out of the Players Handbook. As a GM, I have used a few Google Image searches for major NPC’s, but have not done it that much; something I plan to change with my upcoming Corporation campaign.

In Law Enforcement, they say that when you try to describe a suspect to the police,Â  you should try to tell them what famous person they look like. That famous people form a kind of image shorthand, that you can base a description upon.Â  For instance:Â  “she looks like a redheaded Catherine Zeta Jones”. No problem picturing that…did ya?Â Â  Once again, Google Image search is your friend, you can do searches for famous people by name, or by a movie they were in.Â  You can also do image searches for ethnic groups, or by occupation.Â  You will have no problem finding images of famous people, or not so famous people.

As a GM I had a pet peeve about the use of famous people for character portraits.Â  I thought it was some kind of cop-out. As if it was better not to have a portrait, then to have a picture to focus on. I have come to understand that if the picture of a famous person, can form some kind of mental anchor for picturing a character, then it has value in the game, and that I should relax about it.Â  There is a lot more value in creating that shared image, than for some kind of striving for originality.

The image of a powerful knight, or a 4-color hero, can draw someone deeper into the game, be it on the Players character sheet, or am image that a GM holds up of an NPC.Â  So, how are you using character portraits in your games?Â  Are you fortunate to know or to be an artist?Â  Or are you using some of the techniques above?