27 Uses for the Common Halfling 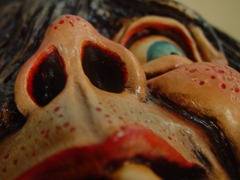 Here at Gnome Stew we pride ourselves on providing the best GMing advice available. That because gnomes are a sturdy and hard working race. Not halflings. Recently we hired a halfling to do some work on one of our many projects, and making that lump earn his pay was worse than tunnel fighting goblins with a sharp stick and “baked beans McGee” as backup. At the time, we had no idea what to do with the little beggar, but since we suspected that many of you have similar problems with your halflings, we did the research for you, and are proud to present: 27 Uses for the Common Halfling.

1. Ditch Filler — Not filling ditches with shovels, manual labor is too much to expect of halflings. No, we mean rolling their pudgy listless little bodies into ditches.

2. Cannon Fodder — While sending wave after wave of tiny stout men into battle actually seems to increase the fervor with which your enemies fight, and the doughy, limp sword arms of halflings are more suited for spreading butter than havoc, using halflings as cannon fodder at least accomplishes one noble goal. It kills halflings.

3. Manure spreader — Halflings are closer to the earth than most other races, and they refuse to wear shoes. What better way to vent your frustration at one of these little ingrates than forcing him to stand knee-deep in horse pies all day?

4. Burglary — They’re going to steal everything that’s not nailed down anyway. Why not take advantage of their natural proclivities and have them steal something from someone else for a change.

5. Courier Service — Halflings are pretty slow, and generally drunkards, but at least by employing them as couriers, they’re drunk and slow somewhere else.

6. Jester — Halfling jesters are usually a pretty boring lot, wasting everyone’s time with their “riddle games” and “oral traditions” (the only “oral tradition” I’ve ever seen a halfling participate in is filling their mouth with everything they can grab at the table), but once you tie sacks on their feet and set their pants on fire, they’re a laugh riot!

8. Ring Bearer — Sending a halfling on a dangerous mission into evil territory is a great way to get rid of them for a while. If they manage to come back at all, they’ll probably have lost a finger on the way.

9. Poison Taster — Halflings never turn down a free meal, and using one as your poison taster has two benefits in the case of poisoning attempts. You’re not dead. A halfling is.

10. Fertilizer — For best effect, plant your halflings head down so the seedlings can use their toe hair as additional anchorage.

11. Underdark Emissaries — Halflings are used to the cramped dark quarters underground, so they’re well suited to pay visits to the drow, illithids, and other underdark nasties. Just make sure to give them papers that indicate they’re there to represent your rivals in case the underdark denizens get angry at the constant harassment. Don’t worry. The halfling won’t figure it out. They’re all illiterate.

12. Dog Walker — Halflings aren’t exactly the most spry creatures, so they’ll need encouragement to walk your dogs at a brisk pace. A few juicy steaks tied around their neck is the perfect motivator. Just make sure to hang them in the back where the halfling can’t get his fat little fingers on them.

13. Soup Maker — Halflings make a superb soup, assuming no one’s got a particularly discriminating pallet, and you fish the toe hair and tiny pants out before you serve.

14. Curse Checker — Over 37% of the treasure adventurers find is cursed. Help sort it out without identification magic by letting a halfling fiddle with it a bit first. Halflings expect a great pay rate for this job, but don’t worry. They’ll usually be happy to work for all the items you decide you don’t want to keep.

16. Bootlick — Everyone feel smugly superior to halflings to begin with because halflings are filthy little amoral indigents. Watching a halfling that’s actually trying to make you feel superior is as close to artwork as a halfling will ever come with it’s greasy sausage fingers.

18. Monster Bait — Properly bathed and spice rubbed halflings are second only to the elf in delicious aroma and halflings come in convenient monster-bite sized packages. Just remember to bring two in case the monster skipped breakfast.

19. Tinker’s Assistant — Everyone knows the modern tinker’s budget is largely eaten up by the cost of quality grease. With a halfling assistant and quick hands, you can cut this expense almost to nothing. Just brush parts against your assistant when they aren’t looking and take advantage of their naturally prodigious oil production.

20. Sleep Coach — Having trouble sleeping due to an unfortunate curse or lumpy mattress? Halflings are the masters of sleeping pretty much whenever and wherever, so if you can keep one conscious long enough to give you tips, you’ll be nodding off in no time.

21. Bar Promoter — Bars do better business the more popular they appear to be, and halflings are notorious drunkards, so offering a special on half-pints will fill your establishment with sloshing little bodies in no time and since they’re small, they’re easy to toss out the door when real customers arrive.

22. Scam Orphan — Shave a halfling’s thick glossy pelt, and you can easily pass them off as a child from a race people actually care about. Take advantage of the kindness many establishments feel for orphans by asking for donations, or just send in your shaved monkey to rob the place blind.

23. Coachman — Not only do most animals run faster with a halfling behind them, but a halfling coachman also doubles as a convenient stepstool for entry and exit from their coach.

24. Con Man — One would think that the natural distrust everyone feels towards halflings would make them poor confidence men, but in fact, a halfling can make good use of their reputation as nasty little liars by telling their mark the exact opposite of what they want them to believe.

25. Sewer Worker — Most races dislike working in the sewers because of the overwhelming odor. Halflings are not only used to overpowering stenches, but the average sewer smell is a step up from halfling body odor, so halfling sewer workers not only don’t mind the smell and improve their chances in halfling dating circles, but also postpone their need for their yearly bath.

26. Boat Anchor — Not only does tying up a halfling and tossing them overboard stop their incessant chatter and give them a much needed rinse, but the iron grip of their jaws on nearby lichen encrusted rocks will hold your ship fast.

27. Rat Catcher — As if halflings weren’t close enough to the ground already, they spend most of their time laying around. Add to that that their favorite places to wallow are trash heaps and garbage bins, and halflings can catch rats while passed out like the drunken transients they are. Hell, most of the time they’ll even eat the rats before they can waddle back to the bounty office, so you don’t even have to pay them!

7 Responses to 27 Uses for the Common Halfling