Turn your Infinite Bag into a Minigame 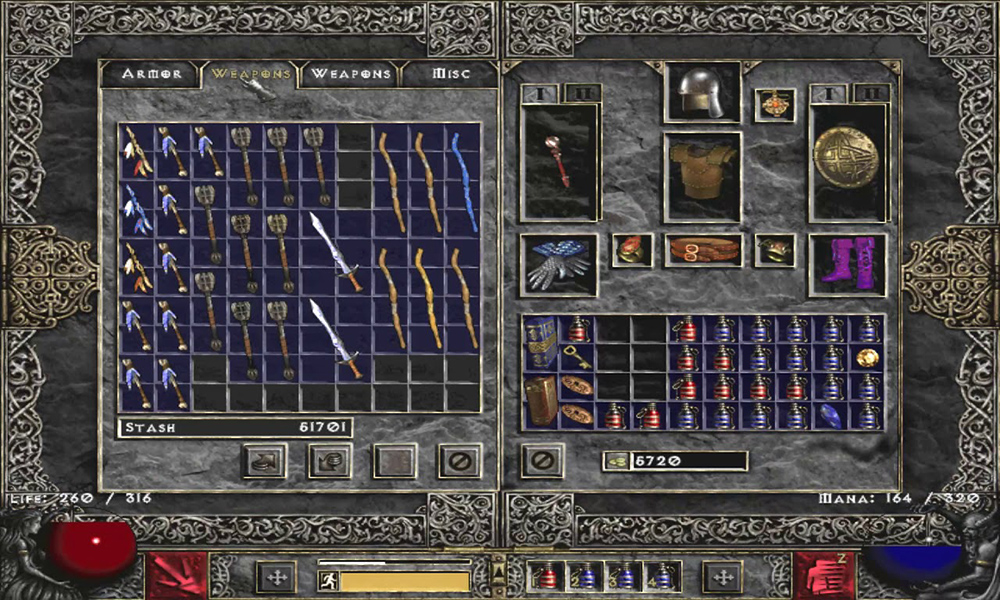 A look at the Diablo II inventory system, which inspired me to create this minigame

We all know those infinite bags that appear in numerous RPGs and videogames. You loot the Lovecraftian monster to find a weird weapon, you put it in your bag of holding, and there it stays until the end of the game or campaign. You as a DM give your players the ultimate wand with limited charges and your players drop it inside of the handy haversack only to be forgotten and never used. Why does this keep happening in all games and how can we solve it?

The Problem to solve

There’s a point in roleplaying games when we as GMs get tired of making sure the player characters aren’t carrying more than they should. That’s when technological/dimensional infinite bags usually come into play. The moment a player character gets one, everyone stops worrying about encumbrance. However, this usually comes with an additional problem: Not having a limited amount of space allows player characters to fill their bag with tons of things. Many players even forget what they have and need to recur to looking at the extensive list they made of things stored inside it. The magic item you took an entire evening to create? Dropped inside the bag and forever forgotten! Things that would make an encounter 10 times easier? Forgotten as well. Let’s compare this with real life.Â  Why is it that this doesn’t happen to us, humans? The space in our bags is limited, and the moment we open it we can easily see what is inside, making it very difficult for us to forget. And don’t get me started on the weight on your back! We are not going to worry about the weight aspect of the game. Most games already have a mechanic you can use for it, or don’t even contemplate weight. These infinite bags don’t even weigh that much most of the time as it sends the things you put in them somewhere else. Then there are two things left: space limitation and a way for us to get a good look at all our stuff at once. How can we replicate that?

Even if we did create a system for us to track things that way, it is incredibly easy for it to become boring. That’s when my mind went back to those times I had to pack my things to travel. The easiest way to make everything fit in a bag is to fit it all as if you were playing Tetris. Videogames have done this in the past, but it has stopped being implemented in later years to be replaced by simpler inventory slots. I personally took inspiration from Diablo II when trying to think of a solution: 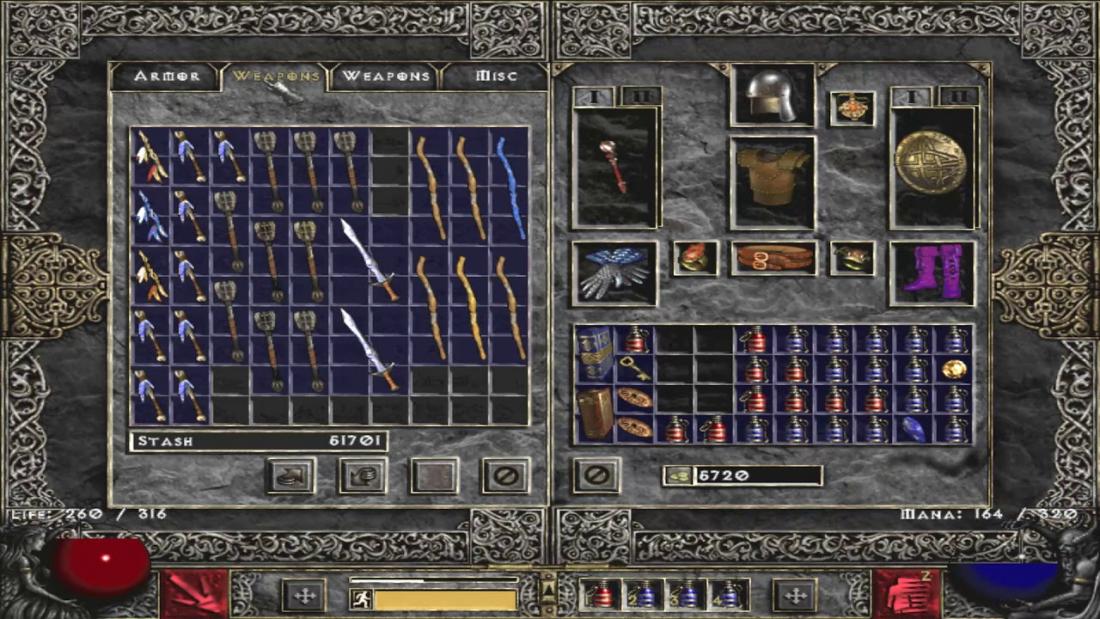 As you can see, the inventory system from Diablo II was far from perfect, but it had some sort of minigame aspect to it. In the videogame, you couldn’t rotate the items like the blocks from Tetris. They would just be there vertically, easily becoming a burden when trying to organize your inventory. However, just by looking at it, you could see with ease the shining legendary sword you had or the number of potions you carried. What if we turned our infinite bag into something like this? Let’s suppose we are playing D&D and we get ourselves a bag of holding. The interior of this magic item has a volume of 64 cubic feet (as it says in the rules). It’s not unlimited, but it isn’t small either. I made a simple inventory you can use if you like: 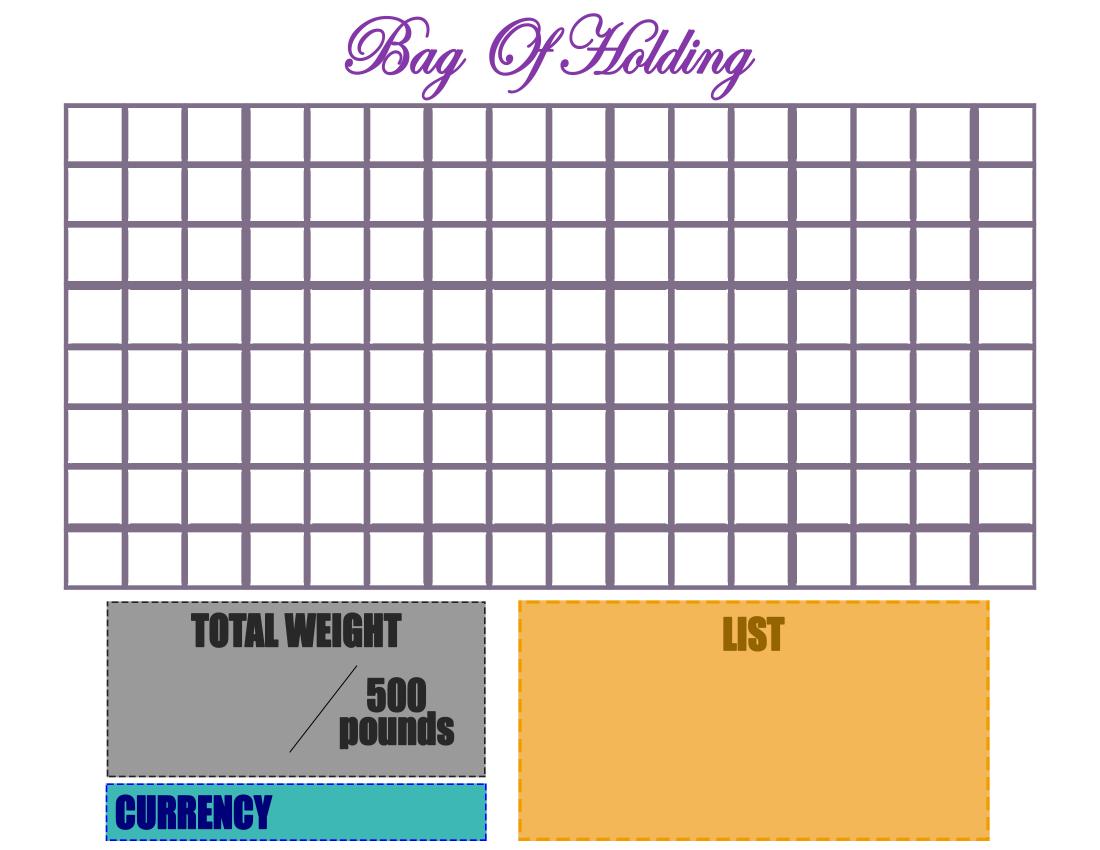 Â Ideally, the GM would hand the players the items they get and they place them in a printed version of this image (or a similar one created by you). I recommend having both a page like this and the items already printed out with an image on them (or writing the name of the item down on the Tetris-like block). Players would then place the block wherever they want in the bag slots and continue playing. Drawing the blocks on the page may not be that great of a choice because there’s a great chance you may need to rearrange the items at some point, and drawing over it may not allow you to do that.

When you first give a player the infinite bag, they can easily fill it in with stuff like they always have. It’s only when it starts to fill up that the hidden minigame starts to appear. Players will need to rotate the items and place them next to each other in clever ways to fit as many as possible. This works great for campaigns in which you want players to track what they have and force them to leave an item they have behind so they can fit the hyper mega weapon they just found when they already have the bag filled up. If the player characters find a hoard of items and money, they might have to make multiple travels to the dungeon to pick everything up, allowing for bandits or minions to come to steal/protect it before the party arrives to collect the second part of the treasure. You will notice that coins are also taken into consideration. Coins can take up some huge amount of space in the bag once the player characters start looting monster hoards. In order to better abstract the volume they would represent, I decided to stick with the idea of 500 coins of any kind taking 1 block. This means that the best thing you can do is go to a bank and replace your copper, silver and gold pieces for platinum pieces (or whichever currency weights less in the RPG you are playing).

I took the time to create some Tetris-like blocks for you to use in your games. You can edit them, write over them, put an image on their top, or whatever you want. You can even create your own if you like, as some weird items can have stage shapes (like the classic S block from Tetris). Below I list some examples of D&D 5e items and which form they would take in my opinion: 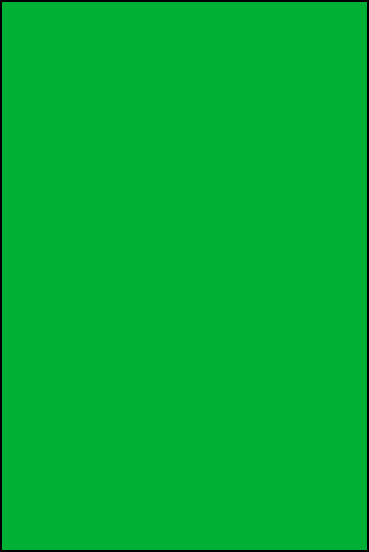 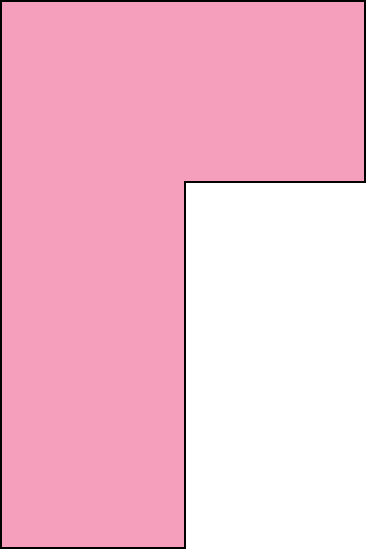 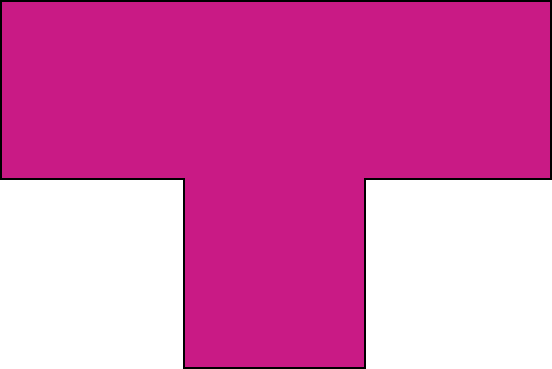 Once you start placing some items, the bag will start to fill up. As time goes on, and the player characters keep finding items, they will need to start organizing stuff, ending up with something similar to this: 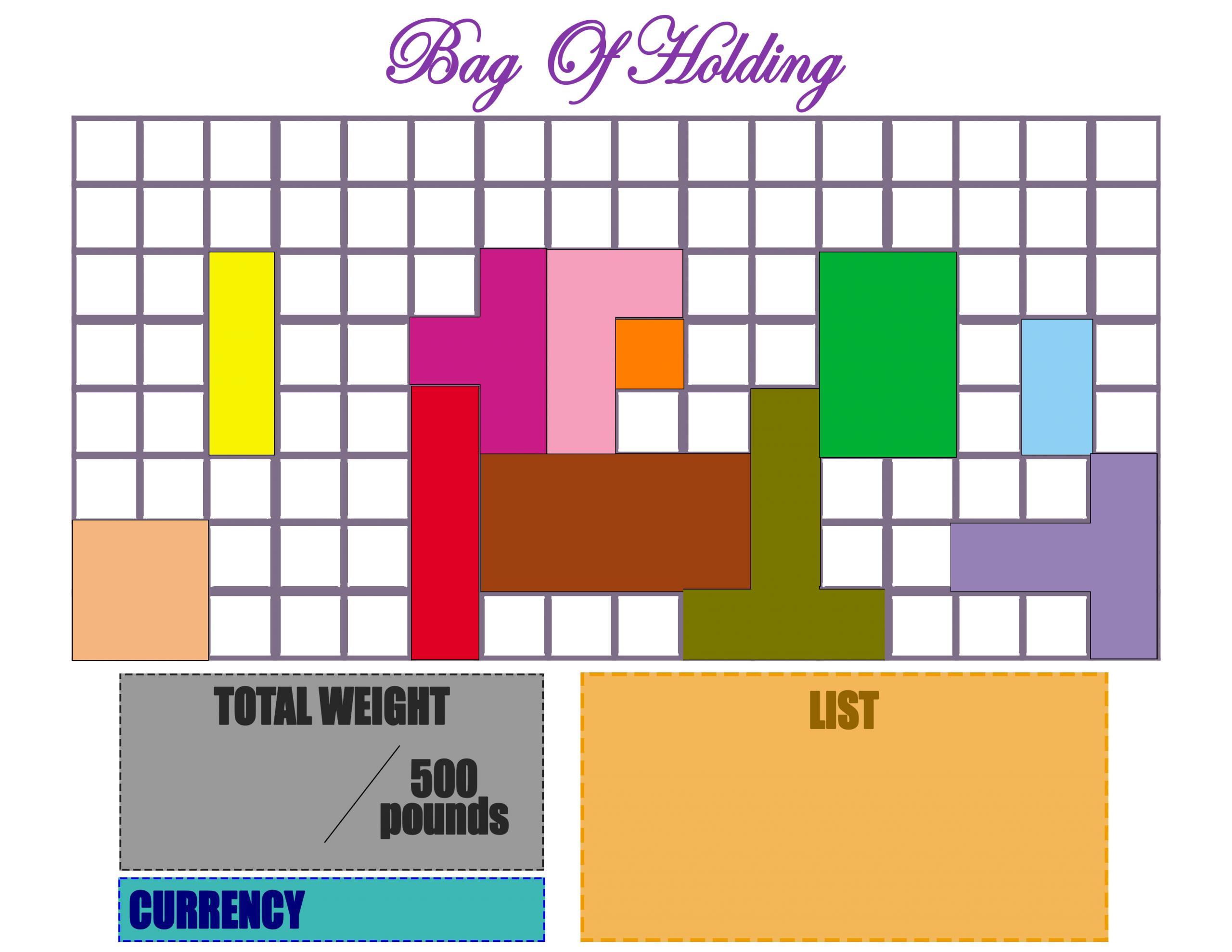 The inventory comes with some boxes below to fill in. This is just an example. You are free to create your own for your game if you want to. The actual purpose of this article is to let you know of this fun mechanic you could be using in your game.

Is this useful for my game?

This minigame adds an extra layer of complexity to the game you are playing, which may not be something you are looking for. I believe this can work excellently for campaigns in which resource management is crucial, but that doesn’t make it any less interesting for a story-based campaign if the players are up for it. However, if you want the inventory system to remain streamlined, then maybe this isn’t for you. This can slow your game down and halt it during play whenever the characters fit a new item inside of the bag. It is my intention for this minigame to be entertaining enough that the fact that the game stills for a bit to place the item inside the bag is considered part of the fun of the game, and not wasted time. The moment I showed this to one of my friends, he was pumped to see it in the future used in our campaigns as it reminded him of the Resident Evil 4 inventory system. Hopefully, it can also give a great sense ofÂ  nostalgia to some of your players, as well as some extra fun for those who love a good challenge.

Did you enjoy the system and are looking forward to putting it to good use? Is there something you would change? Let’s debate about it in the comments below! If you create new inventories for different infinite bags make sure to share them with me on Twitter (@TGimenezrGM). I would love to see it and will gladly share it for others to see!