Even when your group is lucky enough to have multiple GMs, sometimes you need a backup game in a hurry. Or the GM didn’t have time to prep, but everyone has gathered and is ready for an adventure. There are a lot of solutions in that circumstance–you can wing it, improvising a story on the fly, or play a different roleplaying game like Fiasco or Kingdom that doesn’t rely on a GM’s prep.

A different solution is to step out of the realm of roleplaying games altogether. Blending a scenario in a box with a mechanically sound board game yields the Pathfinder Adventure Card Game. In this game, you set up an adventure with a villain, the villain’s henchmen, monsters, traps, NPCs you can try to recruit to your team, spells, and items. Each location has a varying mix of each; the general store is long on weapons and armor, but isn’t a place to find scrolls. If you explore the Arcane Academy, however, it’s a great place to find spells… and, sometimes, an ogre lurking in the stacks.

While we’re a group that roleplays together regularly, we don’t do a lot of speaking in character when we play the card game. It’d be great to play with a group that did… but, if you’re at all prone to saying “I hit for seven damage,” the mechanics of the card game are even more central and distracting. And there’s no GM to grant circumstance bonuses for your great oratory.

While it’s not a game for deep roleplaying, it does provide an opportunity for a group of adventurers to take on quests, deploy their resources, overcome obstacles, track down and end the villain’s threat. Even more than module play, you’ve bought into the railroad–but the game delivers on its promise, delivering a tense adventure that has you sweating about the foes you face, and wondering if you’ll be able to overcome the villain’s scheme. 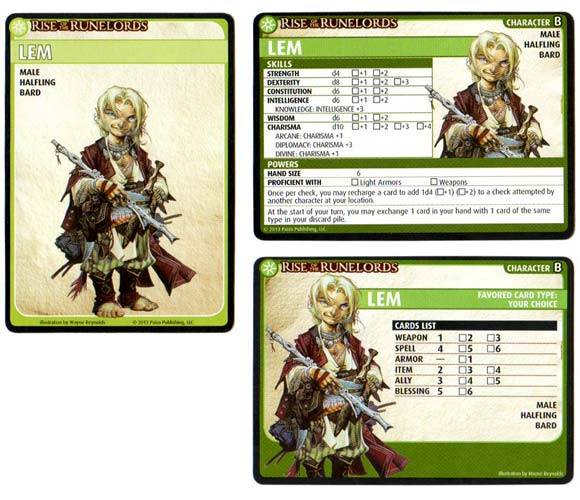 Each player begins by picking out one of the iconic characters–Harsk the Ranger, Lem the Bard, and so on. You have two cards for each character; the first card is art with a character background on the back. This card you move around the locations like a mini. The second card you keep in front of you; like a character sheet in a traditional RPG.

The back of the character sheet card lists the cards you build into your personal deck. So Lem picks one weapon, four spells, and so forth, ending up with a selection of 15 cards that represent the character’s resources. Once you’ve built your character’s deck (which you’ll do before the first game and before using a new character, but not often), you flip the card to the other side with your stats, skills, and powers. You’ve finished character generation–you’re ready to play.

Even though everyone who plays Lem will have one weapon and four spells to start, picking out your equipment begins to set a character’s personality. Just like a D&D or Pathfinder game, a bard with lots of illusions and trickery feels very different from an inspiring crusader who wields a sword and buffs his allies. Characters aren’t static, which is great. As you complete adventures, you check the boxes on both sides of your character. So, Lem starts off without armor–but if armor fits your character concept, you can check the armor box when you advance and add some armor into your deck. If you spend most of your time casting spells, you can check that box and add a spell from a scroll that someone in the party discovered (and didn’t expend) during the adventure.

As you continue your adventures, the foes get a little harder, better items can be found in the locations you explore, and characters become better at their specializations. The characters use their new abilities and items to face even tougher foes–and contribute more, whether by launching arrows to aid their friends (as Harsk does), inspiring allies at the same location (as Lem does), healing, wild-shifting, or smiting evil. The character abilities do a good job of reinforcing the feel of a class; when the ranger scouts out the next card, it feels right.

At the end of the night, you return your built deck of cards to the box. When you arrive the next night, you take out your character’s deck, shuffle it, deal out a starting hand and you’re ready to play.

There are two big, recent developments for the Pathfinder card game.

The most recent is that the Pathfinder Adventure Card Game is coming to your tablet… sometime. Obsidian and Paizo Announce Partnership. (Their release says they’ll have an early prototype at GenCon.)

The Pathfinder Adventure Card Game is also getting organized play. So when you’re looking to scratch that dungeon raiding itch, you don’t have to round up your own group–you should be able to sit down with total strangers, take out your character’s deck, and take on the week’s adventure.

In the end, the card game is a fun activity that isn’t roleplaying, but has enough in common with roleplaying that it’s recognizable. The first game or two feels a little strange, but the internal logic comes quickly to the fore, and characters change often enough that there’s the thrill of advancement. That feeling of progress has us alternating weeks between a Pathfinder game and the Pathfinder card game. They’re very different experiences, but complementary.

Have you played the Pathfinder Adventure Card Game? Do you swear by a different near-roleplaying game like Talisman or Dungeon? Let us know what game you play–and which character is yours, if you’re a Pathfinder card game fan.