The Kobold Guide to Game Design, Volume III: Thinking About Design Can Make You a Better GM

Despite the well-known enmity between gnomes and kobolds — AKA scaly halflings — the Stew hearts Kobold Quarterly. Why? Because it rocks.

KQ is the brainchild of Wolfgang Baur, one of the most famous game designers around, and among the many other irons he has in the fire he publishes the Kobold Guide to Game Design series. Volume III came out in print last Friday, and Wolfgang asked if I’d like to write a GMing article about this volume, which is subtitled “Tools & Techniques.”

There’s a lot of crossover between GMing and game design, and, expecting great things from the KGGD3, I was happy to take him up on it. He sent me the PDF, and I tucked into it.

If you’re interested in game design, whether as a dabbler, a Forge-style indie designer, someone trying to break into the mainstream RPG industry, or for other reasons, you’ll enjoy this book. It’s a good book — and on top of that, it’s also a good book for a reason entirely unrelated to its title or primary focus: It’s got a lot to say about good GMing. 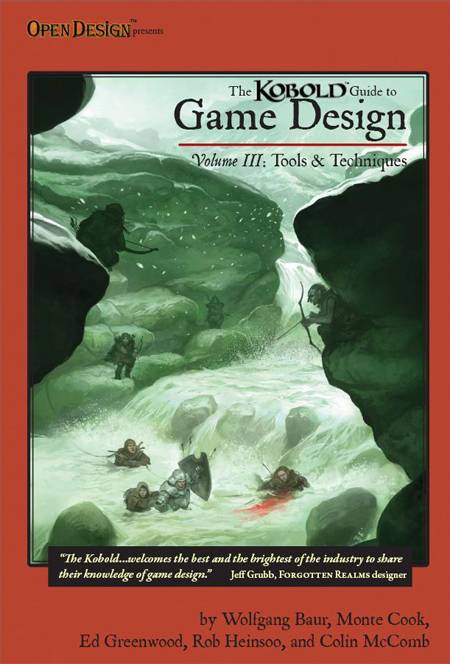 Well, no — but they do have a lot in common. GMing nearly always involves an element of game design, whether it’s creating or vetting house rules, coming up with new mechanics, creating an adventure, or building up the storyline behind your campaign. And game design, with its combination of art, craft, and science — the exact three terms I usually use to describe GMing — is a discipline that bears a lot of resemblance to game mastering.

So although writing an article about a game design book from the perspective of applying it to GMing is bending things a bit, it’s the same kind of bending things that GMs do every single day during prep and at the gaming table.

Right up front, Wolfgang spells out what game design is, and it’s hard not to read this list and also think about GMing. Here are some highlights that apply equally well to game design and GMing:

A bit later on, Wolfgang says: “Go big if you can.” This is another design/GMing parallel: When it comes to GMing, going big and just seeing how things turn out is almost always the right thing to do.

Similarly, there’s a solid section entitled Heightened Play Experience that discusses ways to punch up the gaming experience through design, but reading this as a GM, I found myself nodding.

Wolfgang highlights conciseness (saying a lot with a little, often by showing), escalation (making things that matter tie to other things that matter), and saturation (pulling out the stops and avoiding subtlety) as key ingredients of good game design, and I’d say those are three great guidelines for writing an adventure or running an improvised session, too.

So: I think this is also a GMing book, and an excellent read from that perspective.

Every essay in KGGD3 isn’t directly applicable to GMing, of course. Some, like Colin “Planescape: Torment” McComb’s piece entitled “Designing RPGs: Computer and Tabletop,” are interesting reads without being easy to port over and apply to GMing. (Which makes sense, since despite how applicable a lot of KGGD3 is to GMing, it’s not technically a GMing book!)

So which ones stand out from a GMing perspective? Here’s some of what jumped out at me (apart from the opening essay, “What is Design?”):

This was my first look at the KGGD series, and it made me want to go back and check out the first two volumes. If you dig game design, adventure design, productive self-reflection, or learning about non-GMing topics to make yourself a better GM, I highly recommend this book.

It’s only 96 pages, but man does it pack a lot into those pages.

You can find the print and PDF editions of the Kobold Guide to Game Design, Volume III in the Kobold Quarterly store.

3 Responses to The Kobold Guide to Game Design, Volume III: Thinking About Design Can Make You a Better GM