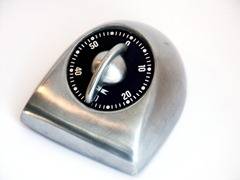 Prep is a hairy bugaboo for a lot of us. Martin wrote his famous phrase “I’d rather rake leaves than do prep” way back in 2005, three years before the Stew even existed, it’s a persistent topic here even without a specific article dedicated to it, and it’s been an Issue I’ve personally struggled with for ages.

Recently however, I discovered the Egg Timer Prep System, and while I won’t say it’s made prep a joy, it’s been a great help to me. And the system isn’t just for prep. It’s for anything you’d rather not be doing, from homework, to e-mail, to TPS reports.

To use the Egg Timer Prep System, just go get your egg timer and set it for 5 minutes, then get to work. This five minute period is actually the hardest part of the whole system, but push through it and prep until the timer dings. Once the timer goes off, set it for another 5 minutes, and go goof off. Play a rounds or two of Bejeweled, read a few pages of a book, check Facebook or your E-mail, or whatever you feel like doing. Once the timer goes off again, set it for 10 minutes and get back to your prep. Keep going with chunks of prep that are 5 minutes longer each time, with a 5 minute break in between each one. That’s all there is to the system.

Sounds easy, right? It is, but there’s at least one important thing to remember. Only be a slave to the timer when it’s time to go back to work. You’ll quickly build a list of what you can and can’t do in your five minute breaks. Don’t get mired in something that takes more than five minutes and then fall prey to the “just one more minute” game. The system only works when your 5 minute breaks aren’t an hour long. On the other hand, don’t let the timer going off stop you if you want to finish up the section you’re working on or are “in the zone”. The startling revelation The Egg Timer Prep System brings to the table is that prep actually isn’t all that bad. It’s overcoming the resistance to prepping and building momentum that’s the hard part. Once you get rolling, you’ll be surprised how often you’ll think “But I’m on fire! Don’t stop me now Mr. Egg Timer!” or even “When is this five minutes going to be up? Isn’t it time to get back to prep yet?”

Another good tip that can help you prep, regardless of what “system” you use, is to isolate and remove your distractions. I have the Digsby gadget, which sits on my desktop and keeps all my social networking contacts and sites at my fingertips. That’s great for making sure I check the Stew’s Twitter feed and Facebook page now and again, but when I’m trying to prep, the constant activity does nothing but distract me. Once your momentum is lost, you’re stuck fighting the uphill battle to get rolling all over again. No thank you Digsby. I’ll re-start you when I’m done. So if you find yourself sidetracked by the same distraction time and again, find a way to get rid of it while you’re working. Don’t worry. We’ll still be here when you’re finished.

So next time you have prep to do, or your tax forms need to be filled out, grab your egg timer, turn off your cell phone, and you’ll find yourself done in no time.