Storium – The Best Little Game You Might Not Know About 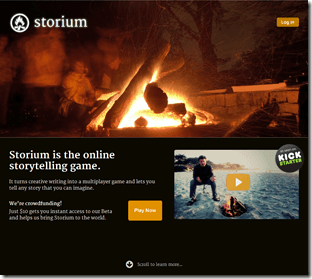 So, a while back I was making a decent number of trips across country. In order to occupy myself during long, lonely hours in the car, I got into listening to RPG podcasts. On one of these Podcasts, I heard an interview with one of the people responsible for Storium.Â  Have you heard of Storium? I had heard about it in various people’s posts and knew there was a kickstarter going on for it, but I figured Storium was just a new storytelling game. It is not. It is way more awesome than that.

I got in just in time to back the Kickstarter, but I had mostly ignored the talk of Storium because I thought it was just a new game out there. Interesting though it sounded, it didn’t appeal to me. Then I found out what it was about. Storium is a website that has a mechanic for primarily narrative play at your own pace. Like old Play By Post or Play by Email types of games, Storium lets you start a narrative as a Game Master and then players pick it up at their own pace. Storium integrates a “card” and “challenge” mechanic system to give some mechanics behind the narration. It goes like this:

The Game Master makes a setting and creates cards to represent various elements of it.

Our story is one of the trials aboard theÂ  Lucht SiÃºil, an exploratory semi-military ship of the Children of Eire, the federation of Irish colonies in space. Think Wing Commander or Battlestar Galactica meets Battletech meets Farscape with a touch of Robotech thrown in for good measure. That’s the setting created and pitched to the players. With a scant Google Doc of setting and background information, I modified a bunch of cards in the base Space Adventure story created by Will Hindmarch. I set up NPCs, Places, Challenges, and other setting specific traits for the players to choose from. The Narrator cards I use to create atmosphere and supply challenges in the scenes that get created. The other cards are ones for players to choose from or assets that I can assign to them so they can overcome challenges. 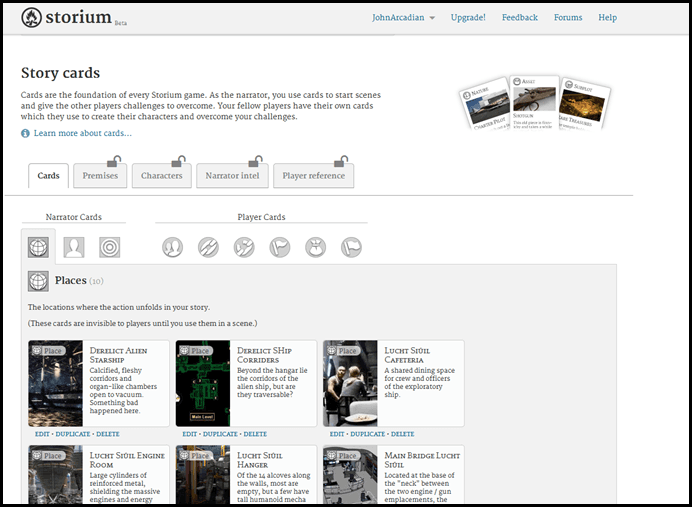 Players make a character and assign “cards” as attributes

The players then create a character and assign cards with Natures, Strengths, Weaknesses, and Assets. They’ll gain more throughout the game and a few are left as wild cards. The cards will be used to address challenges I set forth for them. 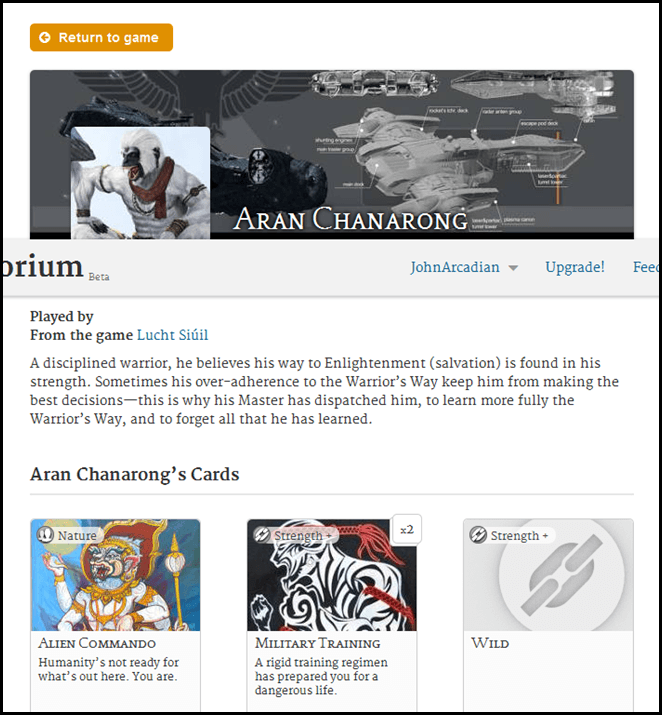 Once I’ve got my cards and the players have their cards, I set up a scenario and put a number of challenge points on a card. The players then take turns narrating their actions. On some turns, the players play cards to address the challenges. So, if I set up a challenge that is 3 points, then 3 cards have to be played throughout the scene to address that challenge. The challenge is either overcome with a weak outcome or a strong outcome, based on the cards they play (strong or weak). I can add new challenges, include NPCs with challenge points on them, or modify the situation as we move along. Comments can be made and I can ask for players to revise their scenes. 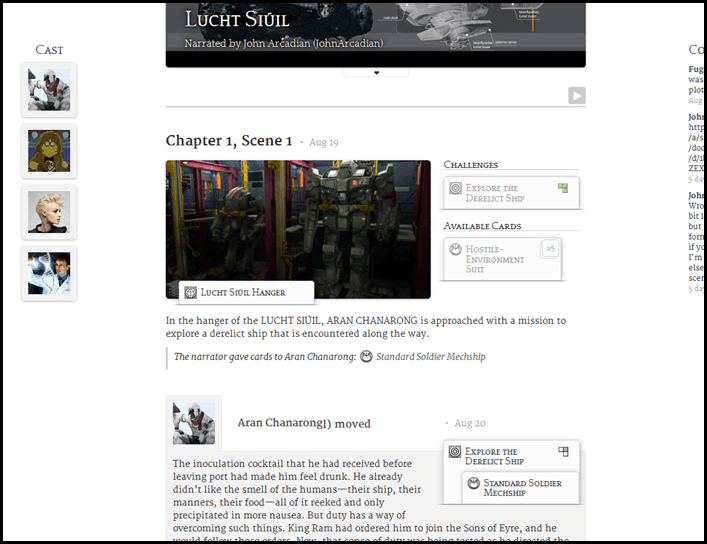 As the scenes move along, the players continue to play cards and build on their own sub-plots, but the game allows for it to happen at the players’ pace. (Dallas Halloran is being played by Gnome Angela Murray). 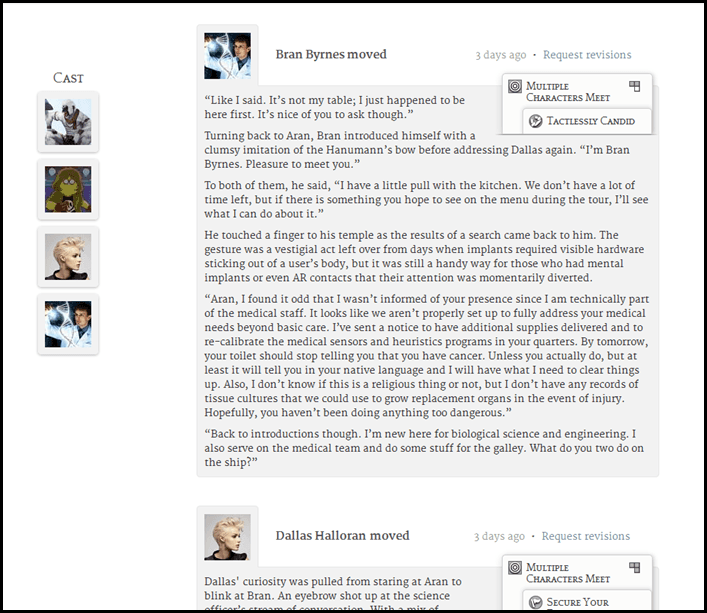 The primary thing that draws me into Storium is, quite frankly, my current lack of dedicated time and a distributed friends network. I dig playing these narrative types of games, but there are some people I can only get to play with if we do it online and even getting to my local gaming group is troublesome some sessions. Moving these narrative elements online in a play at your own pace paradigm lets me get some gaming in, tell some incredible stories, and get to see the players at their best. Reading my players stories, I sometimes forget that I’m narrating a game and not just reading an awesome book online.

The system is simple and intuitive and it is easy to create new challenges on the fly.Â  The ability to include images on the cards gives them just the touch of flash that is needed to get people visually engaged. Storium gives me an excellent platform to get some gaming going online, and I love the fact that I can fit it in around my other projects. It’s become my morning stop to check the scenes, narrate a new one, and see what the players are doing

Storium is currently in beta and scheduled to be fully functional in November, but you can jump in and make your own stories now with a simple $10 donation to get beta access. There will be a free version which limits you to participate in only a few stories, but the paid version is well worth it to me.

If you haven’t heard of Storium or haven’t yet got into what it is all about, go check it out and watch their tutorial videos. Storium has given me a way to get a game in even with my hectic schedule.