If you’re on the internet a lot you may have seen dice by Cyberdicegames pop up in your feed. I had seen them on several sites before I finally contacted them and asked how one goes about getting their grubby paws on a set. That in itself is a story, but first, a word about the dice themselves. They’re machined anodized aluminum and in the promo pictures they look gorgeous. For example: 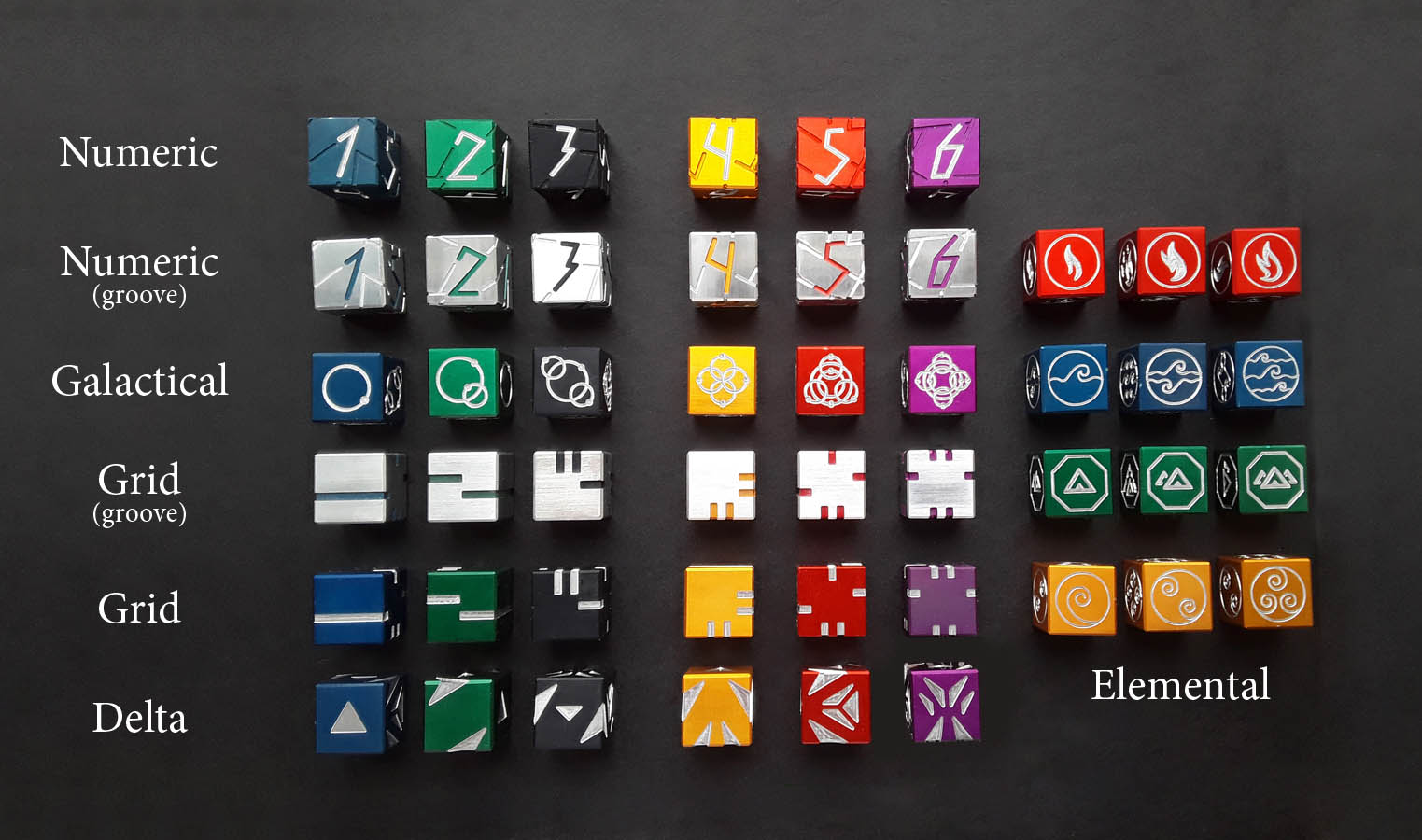 Well, I am pleased to say that the promo pictures DO match the look of the actual dice themselves. What you see is what you get, at least in the case of the dice I purchased:

At twelve to eighteen dollars per die, they’re a little pricey even for machined aluminum dice, but they’re certainly not the most expensive machined aluminum dice out there and if their creative patterns are something that speaks to you, you’d be hard pressed to find an equivalent elsewhere.

Now for the story about getting your hands on them: To be completely honest, I waffled a lot before ordering these dice. I kept weighing the effort of making and maintaining a Facebook page, an Instagram account, a Twitter account, an Etsy shop, and a Pinterest board for the company, some of which have dozens of photos, regular engagement and happy customer feedback vs a payment method that screamed “scam” to me.  You see, the only way to get your hands on these dice is to send a Facebook message where you will discuss which dice you want and how many. Then you must pay via Zelle, a payment method with no refund options that is legit but which you are advised online to only use with people you know and trust. Add in a few other misc. details that were big red flags and I was reluctant to make the transaction. And then they forgot to send me a tracking number until the dice were actually in my mailbox (That’s mostly on me. I should have followed up.) and I had written these dice off as a lesson learned in not falling for what looked like a well established web presence.

In the end though, it turns out that my worries were misplaced. Not only did I receive the three dice I ordered, but I received a free die that I did not order along with them! I understand that a small business sometimes has to bend over backwards to turn a profit, and I definitely understand Cyberdicegames not wanting to raise their prices to cover other payment options  etc… but at the same time, I can understand anyone being reluctant to make the leap of faith I did to acquire these dice.

Some more promo pictures. Yes, those are glow in the dark dice.: 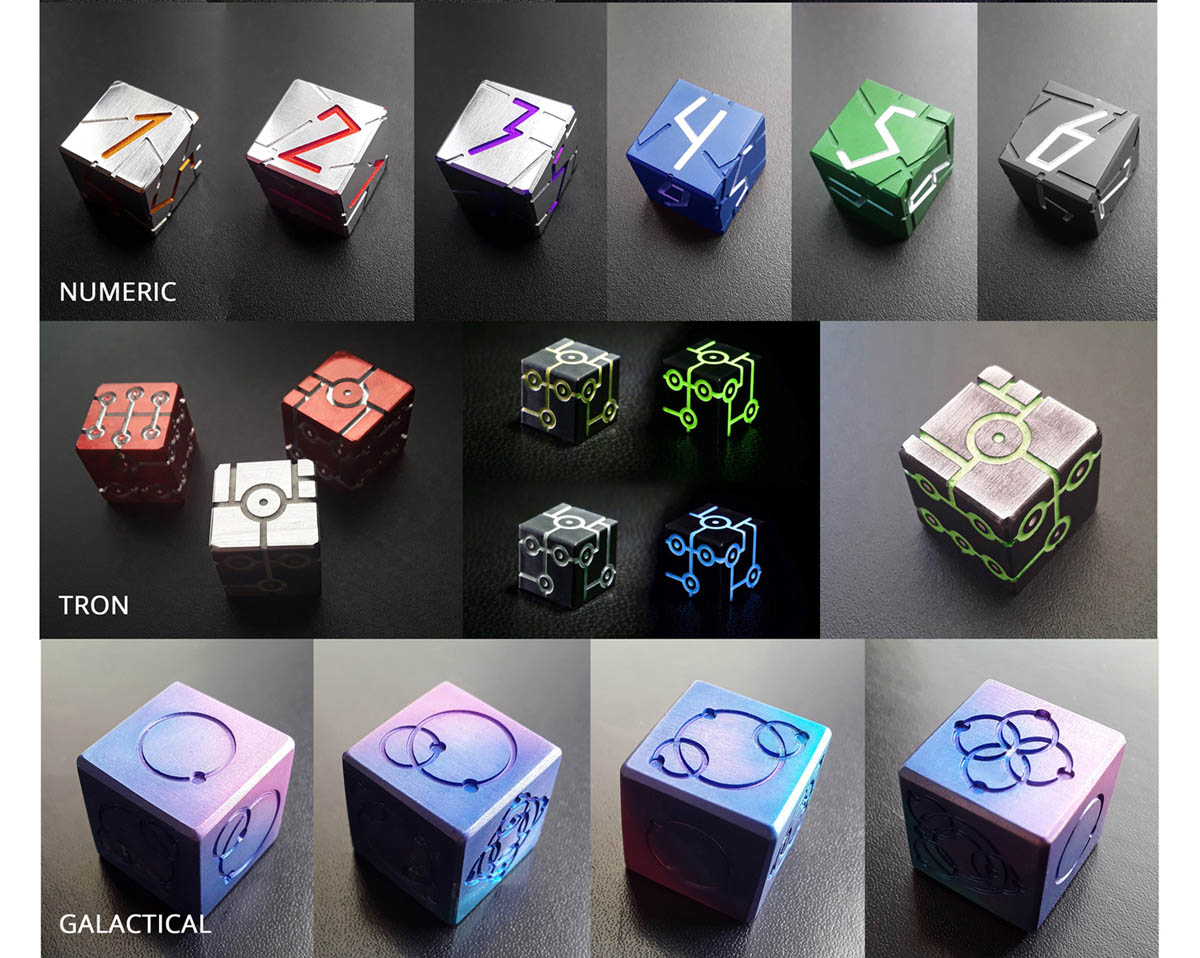 As is standard, I ran some chi square tests on the dice to assess their fairness. Since they are machined dice instead of cast dice I expected them to test fairly well. No dice are ever truly fair, but as long as effort is made to make sure a similar amount of material is machined off of each side to create the “pips,” in theory machined dice should be about as fair as one can get. For the most part these dice bore this out. A hundred and twenty rolls per die and the p values were about what you would expect… except the blue die. The lower the p value of a test and the less likely the die is to be fair. Standard cutoffs are .1, .05, and .01. I usually use .05 as my cutoff and the blue die had a p value of .02. 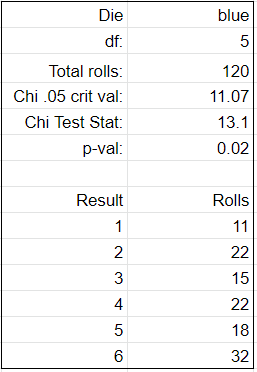 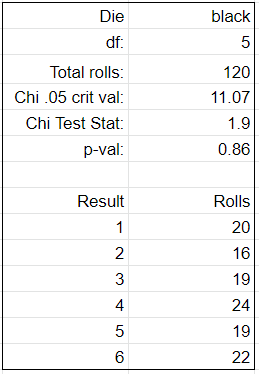 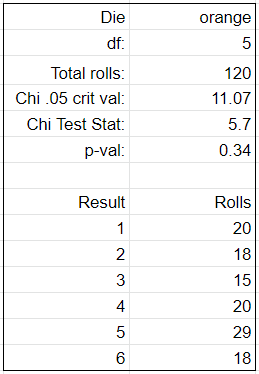 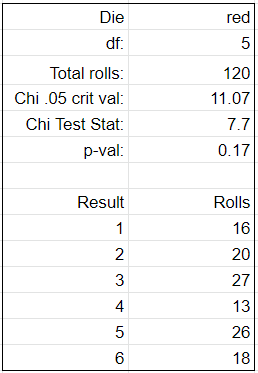 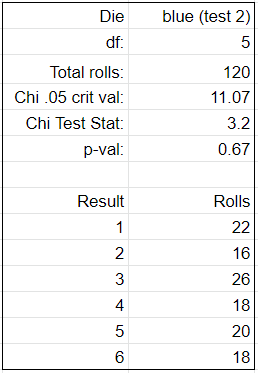 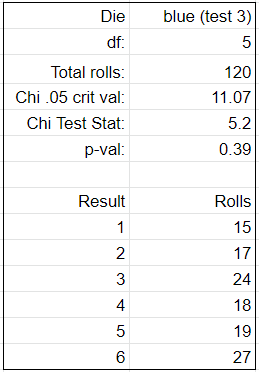 At this point I am confident enough in saying the dice are fair enough for table play, which is good enough for me.

A note on power and what I mean by “table fair”: I frequently get comments on my dice articles that I use insufficient rolls to have truly powerful tests. This is a fair assessment, especially when I use the bare minimum roles to meet the criteria of a chi square test as I sometimes do. However, I’m not really interested in if these dice are truly fair (They’re not. No dice are.) but rather in if they seem close enough to fair for table play. ie: Are they fair enough so that within the context of a regular gaming session they seem fair?